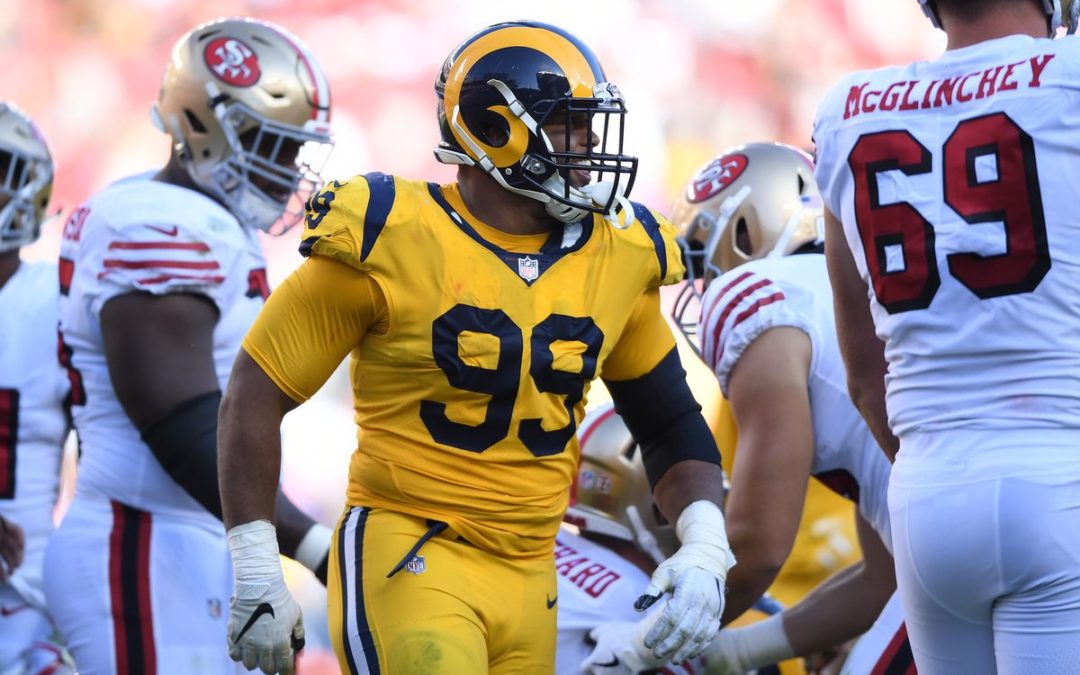 Another week of excellent NFL action is in the books and we had a huge upset and a shakeup in the MVP race so far this season. Russell Wilson and Christian McCaffrey laid down their cases this week in the early MVP race. The Chiefs and Patrick Mahomes stumbled against a Colts team that came to and held the Chiefs to their lowest scoring game since Mahomes took over as the starter. The Pats and 49ers stayed unbeaten and a large number of teams still have not found their identity and will look to find it this week. There are some juicy matchups this week and it was hard to only choose a few, but here we go.

San Francisco is coming off a dismantling of a Cleveland Browns team everyone thought might challenge them. That wasn’t the case and the 49ers lineman on both sides of the ball dominated this one and ran Cleveland off the field. This game sets up to be a tougher challenge. It will be in LA and the Rams defense and Aaron Donald can cause a lot of problems. The other issue for the 49ers offense in this one is the loss of Kyle Juszczyk. He showed in the Cleveland game how important he is to their run game and what they do offensively. Kyle Shanahan, per the 49ers team website, said, “He just does so many different things, run game, even the pass game, he adds a different element that not many fullbacks can do in this league.”

The Rams defense hasn’t exactly been great as they have struggled as well this season, but look for the defense to step up here in a division game that has always been a battle. Offensively for the Rams, it has not been what we are used to with the tight formations and play-action passing off a great run game. It has been a lot of passing. The Rams have thrown the ball 117 times in two games. There has been a lot of talk that this offense has been figured out. The Rams have been able to move the ball and gave themselves a chance to win last week and missed the field goal. Gurley comes into this one banged up and the Rams could rely on the arm of Goff and the secondary backs if Gurley can’t go. The problem is this San Francisco defense is ranked #2 in the league and looks like a legit terrifying matchup for the Rams. The Rams O-line has struggled so far this season and this front seven for the 49ers will give them all they want in this one. The key to this game will be who takes care of the ball both quarterbacks have turned the ball over way more than either coach would like. The Rams are the favorite at home and I expect them to get back on track and knock the 49ers off the top of the NFC West.

Two division leaders enter this AFC battle. The Texans if they can follow the blueprint shown by Pats, Lions and the Colts most recently will have an opportunity to trip up Kansas City again. The injury report is long for the Chiefs but they will not look for excuses in this one and look to get their offense rolling again against this Texans defense. The Texans offense went off last week with Wil Fuller V had an amazing game with 3 touchdowns and another two close calls in a route of the Atlanta Falcons. This Texans team is led by DeShaun Watson but it has been an up and down season so far for the Texans. They are currently ranked 13th in DVOA on offense and 11th on Defense. The good news for this offense is the Kansas City defense has not played well. They were gashed on the ground by the Colts which led to Mahomes spending more time on the sideline than the Chiefs would want. Look for the Texans attempt to establish the run with Carlos Hyde and Duke Johnson. If they want to win this game it starts upfront with the offensive line and if they can create holes and pass protect for Watson they could pull off the upset.

For the Chiefs, they come in with the 2nd ranked offense in DVOA despite Mahomes only throwing one touchdown in the last two weeks. The Chiefs struggled against man defense which they have now for the past couple of seasons. The problem is with the injuries in receiving corps they haven’t had the same personnel to beat that coverage as they have had previously. Receivers are struggling to consistently create separation, and the offensive lineman needs to give those developing routes more time to be completed. Mecole Hardman said this week, via the Chiefs official website, “We gotta take a different mindset, a different mentality in the game. We know we’re going to see man (to man) now. We gotta show teams we can beat it. They’re going to keep playing it until we show we can beat it.” This is indeed what the Chiefs will have to do if they want to keep their offense moving. If Tyreek Hill and Sammy Watkins can get back that will help otherwise it will be up to Travis Kelce and the secondary receiving options to come up with a solution. Look for this to be an epic matchup and this game to be decided by a late score.

The Saints are marching into Jacksonville off a three-game win streak. Who would of thought when they scheduled this game we would see Teddy Bridgewater vs Gardner Minshew but that is what we get here with this one. The Saints have been playing superb football since Drew Brees’ injury especially on the defensive side of the ball. Saints have knocked off the Seahawks, Cowboys, and Bucs in that span and done so in a variety of ways. Teddy came out firing last week and Tampa had no answer for Michael Thomas who absolutely laid waste to their secondary. Kamara hasn’t put up the gaudy numbers that everyone is used to but he is still playing at a high level.

You can always trust a Sean Payton offense, and this week will be a test for his play-calling abilities against a Jags defense that has talent all over the field. The Jags defense may have talent however they have not been playing to its potential. They will need to in this matchup as the Saints have been dismantling defenses the last few weeks. The Jags defense really misses Jalen Ramsey and the saga continues with him and what might happen in his near future. Even without Ramsey, this defense has the ability to hold opponents to fourteen or fewer points which they have twice this year. If they can do that in this game it will go a long way to securing a much-needed victory at home. On the offensive side of the ball for the Jags, there is only one story and that is Gardner Minshew is a starting NFL caliber quarterback and there is no denying it to this point. Minshew has been playing very well and according to Defense-adjusted Yards Above Replacement or DYAR. ( This gives the value of the quarterback ‘s performance compared to replacement level, adjusted for situation and opponent and then translated into yardage.) Minshew is ranked the 9th best in the league at the moment above the likes of Wentz, Garoppolo, Goff, Rivers, and others. The mania is real and he has shown he has poise, sound decision-making, ability to read defenses, and also has the belief of his teammates to make big throws. His ability to make plays has unearthed DJ Chark as a legitimate threat, one that is currently the #5 wide receiver in fantasy points for those keeping the score at home. He has solid weapons around him and is allowing Leonard Fournette to find some room on the ground as well. This matchup proves tough for the passing game as the Saints secondary showed last week that they can eradicate your best weapon. Look for the Jags to look to establish dominance on both fronts. Jags were gashed by the run last week and they will have to sell out to stop the Saints run game and force Bridgewater to beat them through the air. On offense, the Jags will look to establish the run with Fournette and if they can get a lead he could have a 20 plus carry game in this one. The handicap in this one is Jags -1 at home. I like the short home favorite to surprise the league a little bit and take this one from the scorching hot Saints.

With so many games this week looking like great matchups, this was always going to be a tough choice. However, if you would like me to cover your team in the next edition, let me know in the comment section. You can find this article and a host of other content on unwrappedsports.com. Also feel free to come and get all the live content we produce on www.sportcastr.com throughout the week. You can find my Week 6 lines and props on there @semiproUSN. Until next week enjoy the games and have a great weekend.