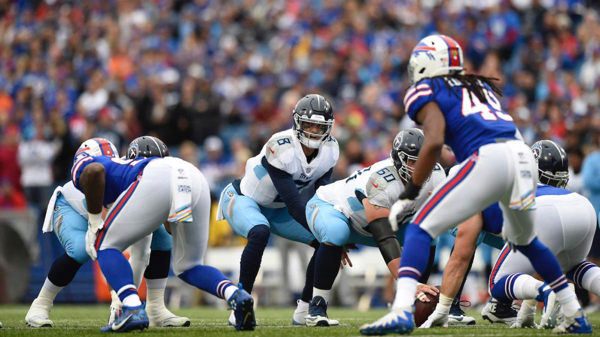 The Buffalo Bills went on the road for the third time this season and Bills fans followed by the thousands. A win in week five kept Buffalo undefeated on the road this year, and wins continue to pile up for the Bills against AFC foe. The Bills would get some help from the Titans kicker, as Cairo Santos would miss four field goals throughout the game and Tennessee would be called on eight penalties for 60 total yards, including on some key third downs and even a negated touchdown. Josh Allen would be the headline story after being questionable all week with a concussion but had a great bounce back after the performance he had last week, even with the one interception thrown. He would finish 23/32 with 219 yards and two passing touchdowns. After Sundays game, Allen now has 16 career starts at quarterback, which would technically complete his rookie season.

Buffalo will have off next week with their bye week coming early, then will welcome the 0-4 Miami Dolphins to town which will be the start of a three-week home-stand including games against the Philadelphia Eagles (3-2) and the Washington Redskins (0-5). 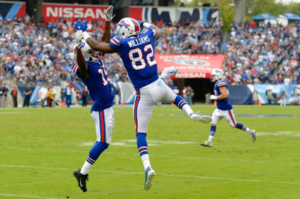 This week five matchup was not a high-flying offensive showdown, only three total touchdowns were scored. There wasn’t one single player who stood out, or was the savior on the Bills offense, but they played as one cohesive unit that got production from every position. Josh Allen played well against a top tier defense in the league, and was able to involve eight of his receivers through the air. The Titans defense was able to shut down the Buffalo run game, allowing just 109 total rushing yards, and no touchdowns on the ground. That could have been a different story if rookie running back Devin Singletary was active, as he is still recovering from a hamstring injury. Going up against a tough defense like Tennessee was very telling for this Bills offense, and the game plan for Buffalo was perfectly planned. Just because there was no MVP on the offense, does not mean that there were no strong showings. Buffalo found production from a wide receiver who was just promoted from the practice squad a day earlier, a fourth-round draft pick, and a nine-year veteran tight end. The strong suit of this Bills team is depth, they continue to find production from players deep in the depth chart, at any position. 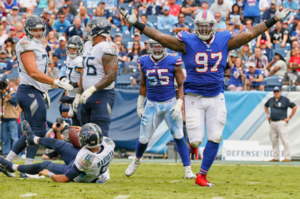 The Buffalo defense continues to prove that they can play at an elite level and shut down any offense they face. Through five games, the Bills have not allowed more than 17 points in a game, and currently sit as the second-best defense in the NFL. Buffalo has amassed just seven sacks prior to week five, but racked up five total sacks on Marcus Mariota on Sunday. Defensive tackle Jordan Phillips had the best two-quarters of football in his career as he got in the back field and recorded three sacks just in the first half. Phillips was dominating the Tennessee offensive line in the first two quarters, including two sacks on third down. Before his defensive explosion in week five, Phillips only had 6.5 total sacks during his five-year career. His performance in week five speaks volumes to how this Buffalo team is built, as Harrison Phillips went down last week with a torn ACL, the mentality of this team is “next man up”. Jordan Phillips took advantage to the great opportunity and should continue to produce this year with his opportunity to get more snaps. 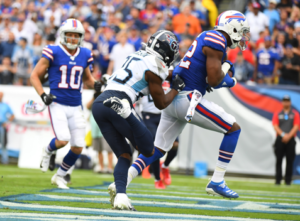 The Bills have been stuck for years in a situation either with a strong wide receiving core and no quarterback, or in last season’s case, a quarterback but no wide receivers. Buffalo thought they solved their problems this past offseason, bringing in wide receivers like John Brown, Cole Beasley and Andre Roberts, but that may not have been enough for their young quarterback. A name Bills fans have been calling for since early in the preseason is Duke Williams. The 6’3”, 216-pound wide receiver, was undrafted, and signed by the Los Angeles Rams but was a part of the final roster cuts in 2016. He would go on to lead the CFL in receiving yards in 2018. Buffalo promoted him from the practice squad one day before kickoff, and he produced as soon as he stepped on the field. He would finish the game with four catches for 29 yards, but one of those catches was the game-winning touchdown in the fourth quarter. Taking over what would be the snaps from Zay Jones, he seems to be a reliable target for Allen and could possibly have a big impact on this offense. He is now the tallest wide receiver on the Bills roster, and could be someone Allen looks for often in the red zone. 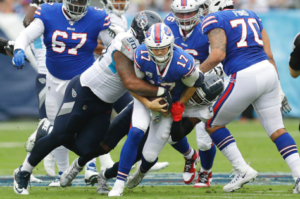 The story all offseason for Buffalo was their activity in free agency. The Bills had only one starter returning on their offensive line from last season, and with expectations high on second round draft pick Cody Ford, the Bills believe they have done enough to protect their young quarterback. Ford played right tackle at the University of Oklahoma, protecting the future first-overall pick Kyler Murray, so Brandon Beane and the Bills front office had confidence that Ford’s talent would transfer to the NFL with ease. That has not been the case so far, five weeks into the season. Ford has been sharing snaps at right tackle with Ty Nsekhe so far this year, but with Nsekhe being inactive on Sunday with an ankle injury, it forced Ford to have a huge role for the Bills offense. He has not been able to hold his own, constantly being beat on the outside and lacking the lateral quickness to keep up with NFL caliber edge rushers. There were four total sacks given up, and although not all were because of Ford, he allowed on numerous occasions, pressure to get through and force Allen to scramble. Buffalo has tried Ford out at right guard during training camp and preseason, but if they want to keep Allen healthy all year and help the offense take the next step, they may want to consider moving Nsekhe to right tackle full-time once he is healthy.