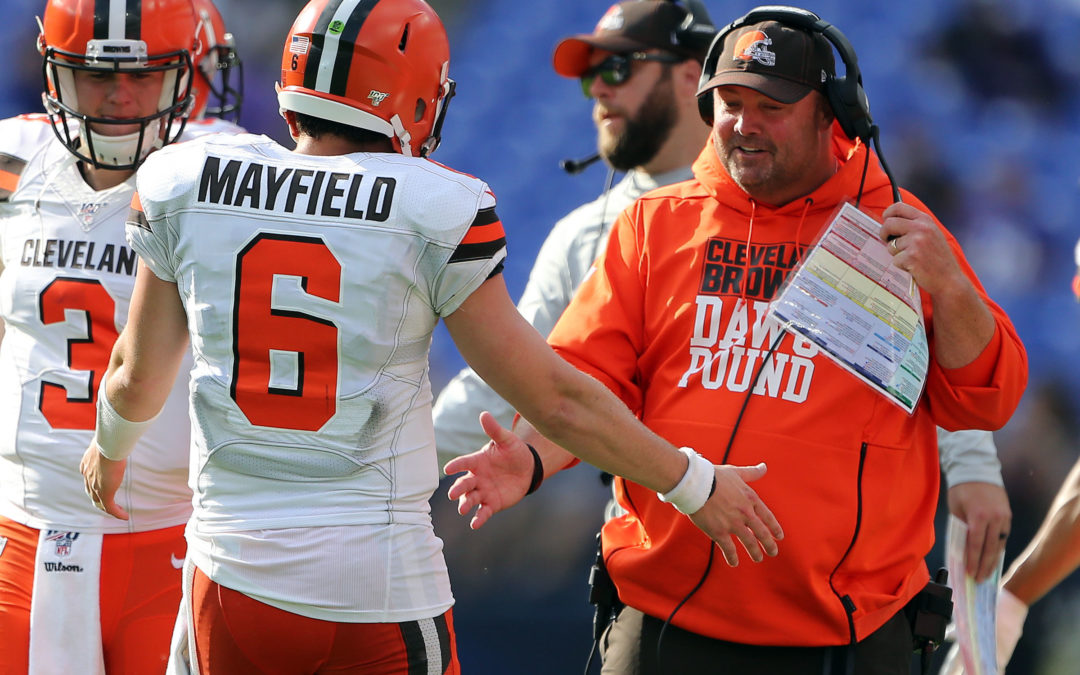 The only undefeated team left in the NFC will take on the Cleveland Browns Monday night at Levi’s Stadium. The 49ers, who have opened the season 3-0, take on the upstart Browns, who are coming off their best game of the season.

The 49ers have had 2 weeks to prepare for Cleveland after their Week 4 bye. After opening the season with a couple of convincing road wins, the 49ers scraped out a 24-20 win over the Pittsburgh Steelers in their home opener. The Week 3 win featured 5 turnovers for the 49ers offense, including 2 interceptions by quarterback Jimmy Garoppolo. Continuing their success on the ground, Raheem Mostert and Matt Breida combined for 147 yards, while Jeff Wilson punched in 2 touchdowns. Defensively, the 49ers defense stood strong, only allowing 6 points off of the 5 turnovers.

On the flip side, the Browns are coming off their best win of the season. After a disappointing Week 3 loss at home to the Rams, the Browns defeated the Ravens on the road in Week 4. The Browns relied heavily on running back Nick Chubb, who slashed the Ravens defense for 165 yards and 3 touchdowns, while quarterback Baker Mayfield threw for 342 yards and a touchdown. The other major pillar of the Browns offense, Odell Beckham Jr., was held to 2 catches on 7 targets for 20 yards.

With veteran mainstay Joe Staley out with a leg injury, the 49ers will turn to rookie Justin Skule at left tackle. Skule, a 6th round pick out of Vanderbilt, started last week and filled in quite well for Staley. This week, Skule will have a difficult matchup with former first overall pick, Myles Garrett. Garrett enters Week 5 tied for 2nd in the NFL in sacks, and tied for 4th in the NFL in tackles for loss. Look for tight ends George Kittle and Ross Dwelley to be lined up next to Skule to help block Garrett. Protecting Jimmy Garoppolo’s blind side will be a huge key for the 49ers offensive line.

In breakout cornerback Ahkello WItherspoon’s absence with a foot injury, rookie Emmanuel Moseley will primarily face 3x Pro Bowler, Odell Beckham Jr., on Monday night. Moseley, who has primarily been a special teams player this season, will face a huge task on Monday night. In addition to Witherspoon’s absence, Jason Verett was placed on injured reserve this week. Verett who was burned by Diontae Johnson on a 39 yard touchdown pass, is out with a knee injury, but could return later this season. In the meantime, it will be primarily Moseley on Beckham, but Jimmie Ward and Dontae Johnson could also see time against Cleveland’s best receiver.

Dee Ford and Nick Bosa have revitalized a pass rush that struggled to record hits on the quarterback last season. These 2, along with Deforest Buckner, have combined for 5 sacks through 3 weeks this season, and helped their defense to produce 7 turnovers. Per Pro Football Focus, the Browns offensive line currently ranks 22nd, and while they are solid on the interior, their tackles have struggled, opening the door for the pass rush. Ford and Bosa will need to continue their invasion on opposing quarterbacks to assist the 49ers shorthanded defense.

The Browns are flying high after a huge interdivision win, and look to gain a share of the AFC North lead with a win. While the 49ers have played 3 teams who have struggled out of the gate, but come in with loads of confidence and a raucous home crowd to back them.