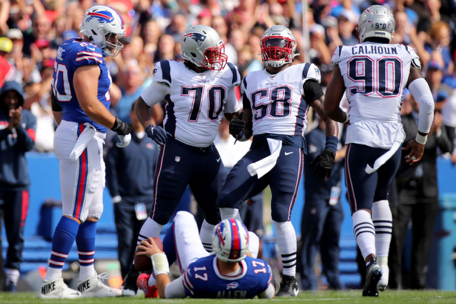 Buffalo experienced loss for the first time this football season, after going undefeated in preseason and the first three weeks of the regular season. The Bills knew it would be no easy task to hold off the defending Super Bowl champion Patriots, but the way they started off the season, they thought they were ready. The defense yet again proved that they can be elite in this league, as they held arguably the best quarterback of all time to just 150 passing yards. Brady completed 18 of his 39 pass attempts, which is one of the weakest performances he has ever had against the Bills. The only defensive touchdown given up by Buffalo was four yard, Brandon Bolden run. If it weren’t for a Matthew Slater blocked punt in the first quarter, it could have been a different outcome for the Bills. New England would go on to hold off the Bills attempted comeback and win their fourth game of the season, 16-10. There is no denying the poor play on offense, and questionable coaching decisions in this game, but Bills fans should not be throwing in the towel yet, as there are many things to still be excited for this season. 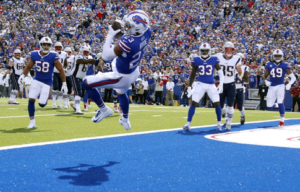 The Good:
The saying that “defense wins championships” is most certainly true, to an extent. The Bills offense struggled in their week four matchup, but the bright side of this outcome is the play of their defense. Buffalo allowed just 150 passing yards, and 74 rushing yards from five combined players, as well as forcing one turnover with a Micah Hyde interception in the end-zone. The Bills forced the New England offense to have seven three-and-outs throughout the game, which is the first time since 2003 that this has happened to Tom Brady. In past years, Buffalo is used to seeing the Patriots take big leads early in the game and hold onto it throughout, but this year that won’t be the case for the Bills. In just five games against New England, Sean McDermott has held Brady to three passing touchdowns and five interceptions. If Leslie Frazier can get his defense to continue to produce like that throughout the year, not only will the defense be at the top of the NFL rankings, but the Buffalo Bills could find themselves playing games late into January in the playoffs. 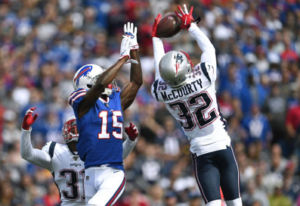 There were many positives to take from this week four matchup, but the victory was there for the taking, and the offense could not get it done. Granted, Josh Allen was taken out of the game for concussion protocol, but the win was there for them all game long. The defense did their job giving the offense a chance to score but the Patriots defense was not giving up anything, proving how dominant they will be this season. New England was able to have eight total quarterback hits, as the Bills offensive line could not handle what was being thrown at them. Wide receivers could not seem to create any separation from the Patriots defensive backs, which did not help out Allen on his rough day. The only bright side on the offense was Frank Gore who continued to produce this season. Luckily for the Bills, they most likely will not face a more challenging defense again this year, until they travel to New England for week 16. 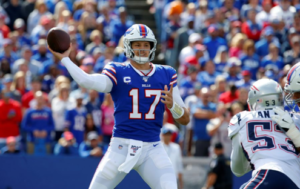 Josh Allen hasn’t technically finished his full rookie season yet, as he has only started 15 games in his career. It seems that many people are very quick to judge him, and expect him to be great right away. That will not happen, he will have his struggles and bad games, but this game was by far his worst start of his career. Allen looked bad on all angles, and did not have too many highlights plays or smart throws. It is too early to panic, because his counterpart, Tom Brady, had statistically his worst start since 2006 (finished with a 45.9 passer rating). Allen would leave the game in the third quarter with an injury after completing 13 passes on 28 attempts for 153 yards. Belichick and the Patriots defense gave Allen looks that he was not used to seeing and did not know how to handle, which would result in him being sacked four times, and him throwing three interceptions. Bills fans should not be worried about how Allen looked in week four, because he has looked great in the first three weeks. This game may have proven that Allen may need more weapons around him to flourish, as his receivers were heavily covered, and his offensive line was not giving him help in pass protection. Whether Allen suits up against Tennessee or not, Buffalo should have no problem handling the Titans and then will move onto a bye week to get healthy and a much-needed rest.