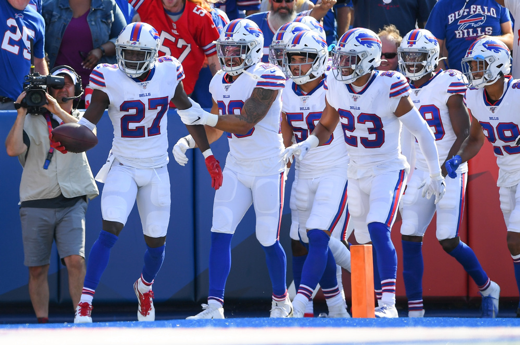 The Bills continued their winning streak after taking down the Bengals in Week Three. This is the first time since 2011 that Buffalo has started a season 3-0, and they will look onto week four as the New England Patriots come to town. The Bills defended their home field against Cincinnati, as they led the game until late in the fourth quarter as the Bengals took the lead off a Randy Bullock 46-yard field goal with five minutes still on the clock. The ensuing drive for Buffalo resulted in a one yard Frank Gore touchdown and Tre’Davious White finished off the game by picking off Dalton at the Bills own ten-yard line.

Overall, Sean McDermott should be pleased with the way his team battled back and played, but everyone knows what lies ahead in week four with Tom Brady and the Patriots coming to New Era Field. The Bills did lose one key piece to their defense, as Harrison Phillips will miss the remainder of the year after suffering a torn ACL. Week three provided highlight plays from every position, as the Buffalo Bills continue to stack wins early in the season. 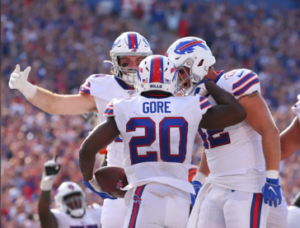 With Devin Singletary missing the game with a hamstring injury, veteran backup and future hall of famer, Frank Gore took over the role as starting running back. Gore would finish the game with 17 carries for 76 yards, and although he did not break 100 yards rushing, he still produced, and came in clutch when needed. Gore would score the game-winning touchdown in the fourth quarter as he punched in a one yard run and gave Buffalo the lead. The 36-year-old running back is not quite the runner he used to be, but he has 144 rushing yards in the past two games. After that game, Gore is currently 357 yards away for third place on the all-time NFL career rushing yards list. Without Gore’s veteran experience and talent in this week three matchup, Buffalo may have been looking at their first loss of the year, but if Singletary can play next week, Frank Gore is a great number-two to have on a depth chart. 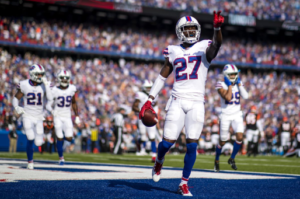 In my week two review last week, I listed Tre’Davious White as the player that the Bills need more out of in order to win, and he did more than just a bounce back. White looked like the elite, shutdown corner that Buffalo needed all game long, and his work paid off has he finished with two interceptions on the day. This is his first multi-interception game of his career, and already ties the total interceptions that he finished with last season. White came in clutch, as he finished off Andy Dalton and the Bengals, with an interception on the Bills ten-yard line to save the game and secure a victory for Buffalo. White had a down year last season, so if this game is a sign for what is to come, the Bills defense could be even more lethal than originally expected. 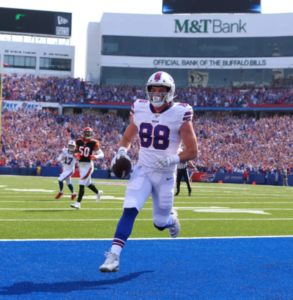 The Bills have played the first three games of the season without a true, number-one tight end, but that may be changed after week three. Rookie, fourth round pick, Dawson Knox had the best game of his rookie year so far. He has always been an important piece in the blocking game, as he is a key piece for getting the Bills run offense going but against the Bengals, Knox showed his raw athletic ability to catch the ball and create space. He finished the game with only three catches for 67 yards, but it was his last one that saved the game for Buffalo. A long, 49-yard gain set the Bills up in great field position, but it was the bully mentality of Knox had that got them there. As well as that clutch catch, Knox would also score his first NFL touchdown in the first quarter. This would be his first touchdown in over two years, as he didn’t have a single touchdown in his final season at Ole Miss. Buffalo thought they would suffer from not having Tyler Kroft back yet, but if Knox can continue to produce, a tight end duo of him and Kroft could be dangerous in the Bills offense. 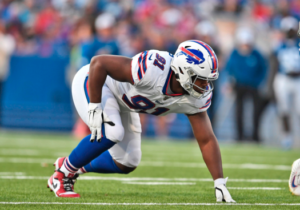 It was an all-around great game for the Buffalo Bills, but in order to continue to win, and beat a team like the New England Patriots, they will need to play the best football they have played yet. The defense is definitely the strong point of Buffalo, and one player who hasn’t played bad, but still not at his full potential is Ed Oliver. Most Bills fans expected Oliver to start off this season with stats that would lead all rookies and he would be the best pick of the draft. He hasn’t quiet put together the start that the Bills were hoping for, but there should be no panic. The 21-year-old rookie has a lot to learn after coming from the University of Houston to the NFL. He is consistently being double-teamed at the line, and because he is usually lined up at the nose tackle position, it is harder for him to break through the line to get to the backfield. For the average fan, Oliver is a “bust” through three weeks, but if you watch him specifically he is helping tremendously in the run game and in taking up space and filling holes. The reason we see more production from players like Shaq Lawson and Trent Murphy is because Oliver is being blocked by usually the guard and center position, which opens holes of other defensive linemen and linebackers. Oliver is listed as my “needs more out of” player this week simply because I would like to see a new dimension of his game form, and that is disrupting the quarterback. Buffalo did not draft him just to take up space and be a tough body to move, that is what Star Lotulelei is for. Ed Oliver is a rare talent, and Bills fans should not hit the panic button yet, the sacks will come and the numbers will grow by the end of the season.