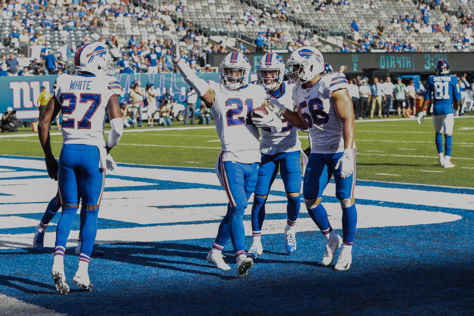 Another week is in the books for the NFL, and the Bills are one of nine teams still undefeated, not to mention one of only four teams in the AFC that hasn’t lost a game yet. Buffalo was favorited in their week two matchup, and handled things fairly easily, after giving up a touchdown on the first drive of the game, but not allowing another score until the fourth quarter. Buffalo would take down the Giants 28-14, completing the Meadowlands sweep, and starting their season 2-0 for the first time since 2014. Josh Allen had a great game compared to week one where Allen and the Bills had four turnovers, but this week they had none. The Bills were able to take advantage of a weak Giants team, but at the same time, contain the talent that New York does have.

Saquon Barkley started the game off with a bang, as he ran for 55 yards on the opening drive and scored his first touchdown of the year, but was nonexistent in the second quarter as he had just eight rushing yards. Barkley would finish with 107 yards from 18 carries. The Bills were able to get to Eli Manning for one sack and caused two interceptions, as Manning would finish the game 26/45 for 250 yards and one touchdown. Buffalo would be in the driver’s seat from the first quarter on, and would not look back. My pick for offensive MVP should not surprise, as he

played a great all-around game with few mistakes and capitalized on the weak Giants defense. 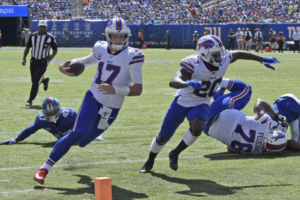 Bills fans have been waiting for a time when Josh Allen can fully be depended on to take over a game and finish in clutch situations. This year, he is making steps to get there and Buffalo should be very excited about their second-year quarterback. Allen was an easy choice for week two offensive MVP, as he was consistent all day and took major steps forward from last week. After the Bills offense had four turnovers just a week ago, this week they had none. Allen was making throws that Bills fans have desperately been waiting for, and only missed on a handful of throws. Allen would finish the game 19/30 with 253 passing yards as well as his second rushing touchdown of the year on a designed run play in the first quarter. Allen would run the ball seven times on Sunday for 21 yards, but was smart about his runs. That is where we see major improvements from last season, where Allen does not give up on plays early and has time to go through his progressions to make plays. Allen should be able to continue to improve next week against the weak defense of the Bengals and could be named my offensive MVP for another week. 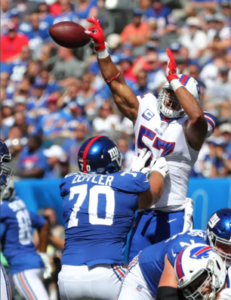 The “old man” of the team and team captain, Lorenzo Alexander, is still one of the most productive players on the Bills roster at 36 years old. He is one of the most important pieces on the defensive side of the ball, and has an impact in the locker room that translates on the field through everyone. Alexander was a part of the lone sack the Bills defense had yesterday, as well as contributing four total tackles. There weren’t too many stellar players on defense for the Bills, as they may have taken a step back from their week one performance, but still shined when it counted. The run defense was strong, even with that being one of the weaker parts of this defense, but Alexander continued to put pressure on the quarterback, as he got a sack in the second consecutive week and he was everywhere on the field, even batting down one of Manning’s passes at the line. Alexander should have another big week against the Cincinnati offensive line in Week Three. 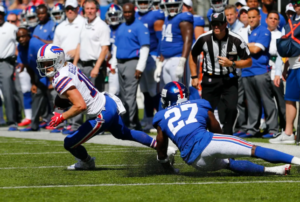 After a tough week one for the Bills new wide receiver, Cole Beasley was very productive in his week two matchup with the Giants and bounced back. I named him the player that Buffalo needed more out of, and he proved his worth on Sunday. Bills fans would definitely like to see him be utilized more as he was only targeting four times on Sunday but of those four targets, all of them were caught and Beasley was the leading receiver on the Bills offense with 83 yards. The Bills are still waiting for his first touchdown of the year, but he was brought in to be a safe option for Allen that can be relied on to get extra yardage in the open field. As the year goes on, Allen and Beasley should form a stronger relationship and be on the same page more often to produce big numbers. 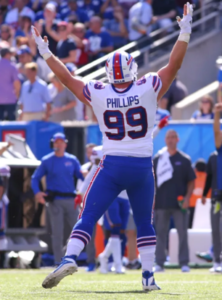 The Bills defense looks like they could be elite this season, and it’s because they are getting production from everyone, whether they be a starter or a second string. This week’s surprise standout player was DT Harrison Phillips. Phillips could be the forgotten man on that Bills defensive line, as he is in the shadows of Ed Oliver, Jerry Hughes and Shaq Lawson, which could be beneficial for him if he can continue to produce like he did in week two. The Bills have not seen a ton of production from Phillips since being drafted in the third round in 2018, so this is a great sign if this is what is to come. He did not produce in week one, where he had no recorded tackles, but took a big step forward as he was able to make three tackles, including contributing on the lone sack of the game for the Bills defense and Phillips was also disruptive in breaking up two of Manning’s passes at the line of scrimmage. This production came against a strong offensive line as well, so it is great to see all players making an impact so early in the season. 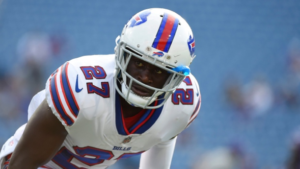 The Bills pride themselves on their pass defense, as it ranked top of the NFL last season. This season they hope to follow that up with even better numbers, but that can’t be done without Tre’Davious White playing at the top of his game. White usually plays as a number one corner, but this past week was a different story. With the Giants weakest link being their wide receivers, it was believed White would be able to shut down anyone he was covering. New York finished with 250 passing yards in the game, and White was being picked on all day. On multiple occasions Cody Latimer or Bennie Fowler would come loose from White and pick up first downs and extra yardage. He did lead the team in tackles, with eight but that is not always a good sign for corner backs as that means whoever they were covering got the ball. Tre White can usually be counted on to shut down any receiver in his zone, as he has done in the past against receivers like DeAndre Hopkins, A.J. Green and Antonio Brown, but White may have overlooked the skills of some of the New York receivers. If Buffalo wants to continue their hot streak, White will have to get back on track for next week against the Bengals who have a very good receiving core.