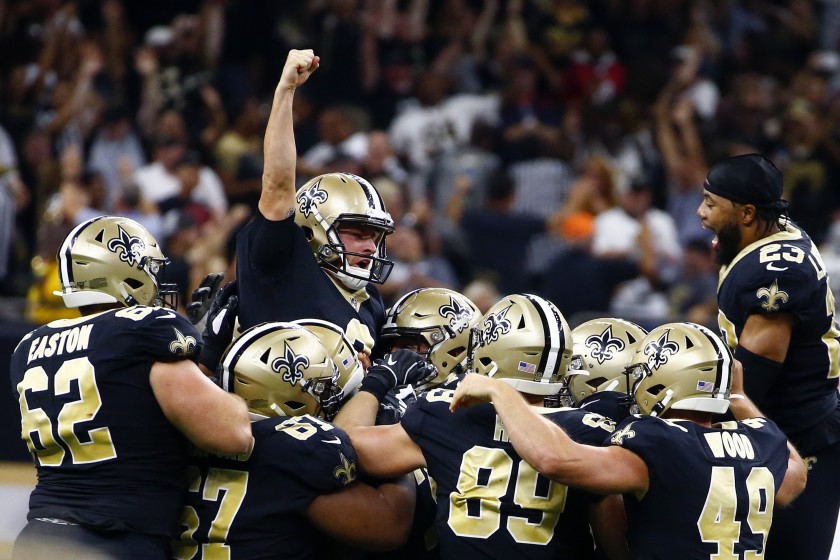 Wow. What a game. The New Orleans Saints and Houston Texans squared off in probably the best Monday Night Football game ever. The Saints struggled on offense early on, but eventually found their stride towards the end of the first half and into the second half. The Saints were down 14-3 at the half and Saints Head Coach Sean Payton made great adjustments during halftime which sparked a late comeback. In the final minute of the game, the Saints managed to take the lead, then lose the lead, then win the game as time expired with a Wil Lutz field goal. His field goal was not only a career high 58 yarder, but it was also the longest field goal in the final 10 seconds of a season opener since the AFL/NFL merger. The Saints start off their season 1-0 for the first time since 2013.

In the first half, the Saints struggled to move the ball. The first Saints drive ended in a punt. The second drive of the game resulted in a rare Drew Brees interception and the next drive ended in a field goal. The defense allowed back-to-back touchdown drives, putting the Saints down 14-3 as Wil Lutz attempted a 57 yard field goal to end the half. He missed and the Saints ended the half down 14-3. The biggest area of concern was their secondary; especially in the first half. The Saints got very lucky on several plays, including three drops by Deandre Hopkins. The Saints will need to tighten up their secondary against another lethal trio of receivers when they head off to LA to play the Rams next week.

My biggest breakout players were offensive tackle, Ryan Ramczyk, and defensive end, Trey Hendrickson. Ryan Ramczyk was responsible for stopping JJ Watt all night long and ended the evening with zero sacks allowed and only one holding penalty. He really stepped up and had a tremendous game against the former Defensive Player of the Year. Trey Hendrickson was splitting reps with Marcus Davenport for most of the game and lead the team in Sacks with two. He was getting consistent pressure against a great offensive tackle in Laremy Tunsil and really has made great strides in the offseason. I’m really excited to watch these two breakout players continue to develop.

The Saints will square off against the LA Rams next week at 4:35pm Eastern Time in Los Angeles. The Rams are 1-0, coming off a slim victory against the Carolina Panthers in Week 1. The Saints are also 1-0, and will be looking for revenge from the result of last year’s matchup between the two teams in the NFC Championship game. The Saints will be returning defensive tackle, David Onyemata, who was suspended from the opening game of the season. In what will likely be America’s game of the week, I expect a lot of points and another close finish that the Saints have come to know and love.