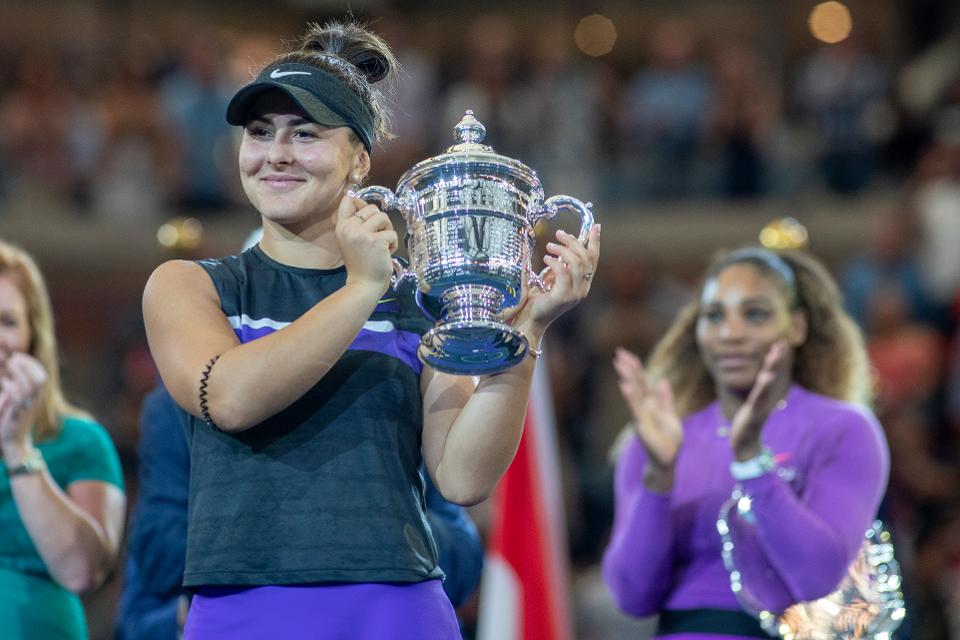 Hey there sports fans, hope you had a great weekend! I am writing this piece out of town, in the gorgeous state of North Carolina; and MAN there was one athlete in tennis that made history, especially for Canadians like myself!! If you missed the US Open’s Women’s Championship match, I’m here to fill you in folks. So let’s get started, shall we?!

After meeting not too long ago in August at the Rogers Cup, tennis goddess, Serena Williams, was looking to win her 24th grand slam title at the US Open Championship Saturday against 19-year-old Canadian, Bianca Andreescu. Both Serena and Bianca faced each other back in Toronto, Serena having to forfeit the match due to a back injury. Now the ladies meet again at the US Open final in New York City, and let me tell you, I did not see this match playing out the way that it did and let me tell you why. If y’all were following the women’s singles matches, you would see that Serena has been playing her best tennis during this grand slam tournament! I personally think that Serena’s best grand slam performances were during the US Open so I had high hopes for her this year!

After nailing her semi-final opponent, Elina Svitolina, in straight sets, it was no wonder Serena was the huge betting favorite to win the championship game. The only thing standing in her way of winning her 24th grand slam was the female tennis player taking Canada by storm, young Bianca Andreescu. Andreescu had a tough semi-finals opponent in Belinda Bencic, having to muscle through a tough tie-break in the first set, and coming back from a 4-1 deficit and eventually winning the second set 7-5. Saturday afternoon comes along, and my goodness did I read this game wrong. With the way Serena was playing this entire tournament, I couldn’t see much Andreescu could do to beat the queen of tennis, except for the fact that Serena’s A-game wasn’t present much during the match! Many unforced errors and a dropping 1st serve percentage, Serena pretty much gave Bianca that first set. Now the game got real exciting during the second set with Serena making a huge come back after being down 5-1. Pushing her opponent, Serena ended up tying up the second set 5-5, but Bianca prevailed and ended up winning her first grand slam title against the best in women’s tennis. It was a great moment for Canadians like me, however bittersweet in the fact that I really did want Serena to win. Congrats on the victory Bianca, can’t wait to see you do more great things this year!