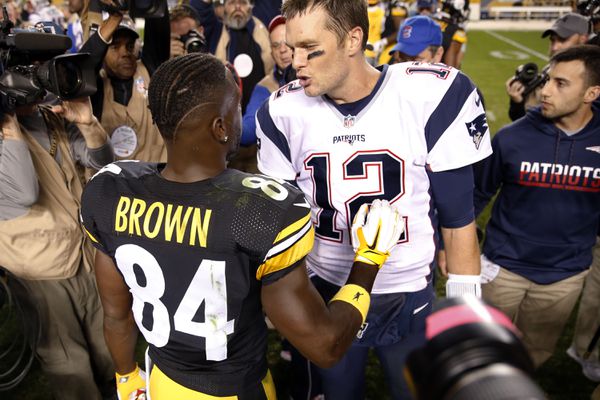 Saturday afternoon, the long, mind boggling feud between star wide receiver Antonio Brown and the Raiders came to an end when the team released him. From filing helmet grievances, to reportedly calling Raiders’ General Manager, Mike Mayock, a “cracker,” the Antonio Brown saga has been one hell of a media ride. However, that ride is most likely over given Brown’s agreement to join the Patriots on a one year contract which, according to Adam Schefter, is worth up to $15 million and includes a $9 million signing bonus. The Brown signing has multiple aspects for New England and his impact could stretch far beyond just his superstar production on gameday.

To start, let’s examine just how New England will likely use the star wideout. Brown has a versatile skill set that includes an ability to stretch defenses vertically, make acrobatic catches along the sidelines, work the slot and possesses a rare explosiveness in the screen game. Another part of Brown’s game that is often not talked about enough is how tough of a football player he is. Excluding Brown’s 2010 rookie season, the wideout has played in no fewer than 13 games per season and has earned seven Pro Bowl appearances. In addition to consistent health, Brown hardly shys away from contact and shows no hesitation when catching the ball over the middle. Some critics of Brown have questioned his ability to learn the Patriots’ complex offensive system that has famously slowed up talented receivers in the past. However, New England’s coaching staff is notorious for identifying what players do well and scheming up plays to highlight what those things are. Make no mistake, Josh McDaniels will not let such talent go to waste as New England has not had an offensive threat like Brown since a prime Rob Gronkowski. Similar to Gronk, I very much expect Brown to help stretch defenses vertically, opening up underneath routes for the savvy Julian Edelman. In addition, I expect Brown to be featured on a number of jet sweeps and quick screens, similar to how former receiver, Brandin Cooks, was used. Brown’s pure athletic ability combined with his sure hands will give Tom Brady and the Patriots an element to their offense that few defenses in the league will be able to match up against.

Aside from the obvious good Brown brings on Sundays, he will also have a positive impact on the Patriots that is not related to his gameday stats. First, Brown’s pure talent will improve New England’s secondary, simply due to the unit having to cover him every day in practice. Secondly, the Patriots’ young receivers such as N’Keal Harry, Phillip Dorsett, Gunner Olszewski, and Jakobi Meyers will have the ability to watch and learn from Brown all season. A similar situation occurred in 2014, when New England brought in veteran corner, Darrelle Revis. Revis not only boosted the Patriots’ defense, but also helped young corners like Logan Ryan and Malcolm Butler learn the intricacies of their position. Lastly, one of the most important areas in which Brown impacts New England is ensuring the future health of first round pick N’Keal Harry. Harry was placed on Injured Reserve last Monday with a lingering ankle injury and had been scheduled to return after eight games. With Brown now on the team, New England should hardly feel rushed to get Harry back on the field and risk furthering an injury that would impede the first rounders future development.

Once again, it seems as if the Patriots and head coach Bill Belichick will be benefiting from another teams’ mistakes and misfortune. However, Brown is hardly guaranteed to have success in New England. While the Patriots’ culture provides Brown with arguably the best opportunity to both be successful and to reshape his public image, the perennial Pro Bowler still needs to buy into the program. Antonio Brown is, without a doubt, a stereotypical diva receiver who has gotten used to teams and coaches catering to his childish behavior. The social media outrages along with throwing tantrums on and off the field will not fly on this team. Bill Belichick will certainly have zero patience for such acts from Brown, nor will he hesitate to cut the veteran if he begins to carry himself the way he did in Pittsburg and this past summer with the Raiders. Despite Brown’s history, I am not too worried he will have any issues in New England. He knows exactly what he is signing up to become a part of; so at least in theory, nothing he is asked to do, or give up doing, should come as a surprise. In addition, Brown will be surrounded by several offensive and defensive veterans, many of whom are Super Bowl champions, which should help keep his behavior in line. Finally, and perhaps the biggest reason for my lack of concern about Brown’s behavior, is the contract he signed. The star wideout being on a one year, relatively cheap contract, should serve as a big motivator for him to clean his antics up and reshape his public persona before heading into free agency once the season concludes. Both the team and Brown will be working in each others favor this season and truly have the chance to keep adding onto the Patriot legacy.