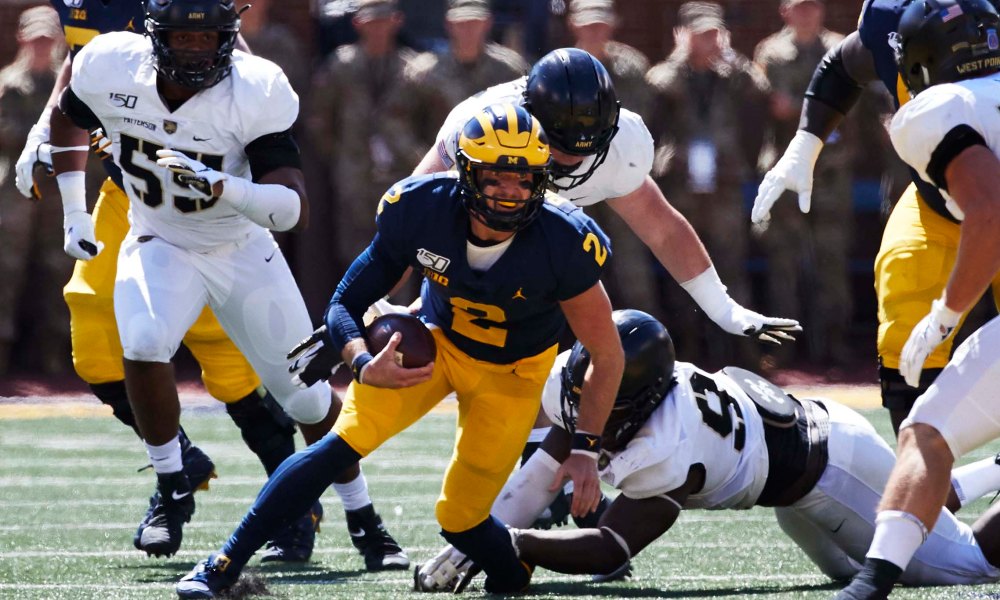 Well, week 2 of college football has concluded. I’m gonna start with how pathetic my beloved Michigan Wolverines looked. Shea Patterson is not the guy that can lead the offense to a win over Ohio St. He went 19 for 29 with 207 yds with 0 TDs and 2 FUMBLES! As a whole, Michigan had 4 fumbles and only recovered one of them. The Michigan offense kept calling the read option where Shae should pulled it and ran the ball himself but he chose to hand it off. Honestly without Zach Charbonnet scoring 3 TDs the Wolverines would have 0 points. On the defensive side of the ball, Michigan held Army to 43 passing yards and 200 rushing yards, and without the strip sack in 2OT I feel like the Black Knights would have won the game with a TD. On the other hand, the  Wolverines defense had a hard time handling the Army triple option offense. In the end, I honestly think that Army should have won that game.

Now let’s take a look at the other top 25 games. Ohio St surprised by beating Cincinnati 42-0. Maryland absolutely dismantled #21 Syracuse 63-20, and unranked CAL beat #14 Washington 20-19. One score that didn’t surprise me was USC’s 45-20 victory over #23 Stanford. Other than Texas vs LSU, the rest of the top 25 teams didn’t have issues. After watching that game I don’t know if LSU’s offense is that good or if Texas’s defense is your common shitty Big 12 defense. Sam Ehlinger had a really good game throwing 31-47 for 401yds and 4TDs. In the end I think the WIDE OPEN touchdown pass dropped by Keaontay Ingram really hurt the Longhorns seeing how they only ended up losing by a touchdown.

There was one team that I think won the weekend and that was the North Carolina Tar Heels now 2-0. I think Mac Brown is back with wins over S Carolina and Miami. Other than Clemson (obviously) and Virginia I think the Tar Heels are the 3rd best team in the ACC and I am interested to see what they do throughout the rest of the season

I hope Week #3 is better football from a fan and a bettor perspective (but I will get into that with my Friday article).