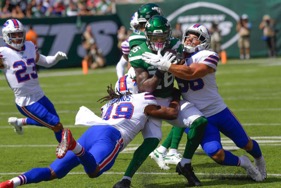 Week one has been wrapped up for Buffalo, and the Bills are 1-0 on the year. Some teams pulled surprising victories and some teams like the Cleveland Browns could not live up to the hype yet after losing by 30 points in their home opener. The Bills and Jets game was played as expected in some ways, a close game all the way through, even with some offensive struggles in the first half for the Bills. Buffalo offense struggled to put it together in the first half of the game as they found themselves down 6-0 at the half and down 16-0 at one point. With four turnovers for Buffalo, it was not a game any team should have won, but the Bills had a little luck on their side.  As they always say, defense wins championships, and the Bills defense was outstanding in holding off the Jets offense.

Sam Darnold and the Jets were only able to convert 7-17 on third downs, and amassed just 223 total yards for the game. If it weren’t for the C.J. Mosley pick six in the first quarter, the Jets would have only scored ten points all game. Darnold would finish just 28-41 with 175 yards and one touchdown on the day, as his counterpart, Josh Allen finished 24-37 for 254 yards and one touchdown, as well as two interceptions. There were MVPs on both sides of the ball for the Bills, as well as some players who were close to nonexistent on the stats sheet, to review the game I will layout the offensive MVP, defensive MVP, the rookie standout, surprise standout and a player who the Bills need more out of to continue to win games.

There was seemingly no offense for the Bills in the first half, after being shutout and only having one designed run play in the first quarter. Bills offensive coordinator Brian Daboll made some adjustments in the second half, as he got Josh Allen and the offense going. The week one offensive MVP of the week for Buffalo is going to leading receiver John Brown. Brown would finish with seven receptions, for 123 yards and the game winning touchdown. He was a huge help in getting Allen back on track, as it seemed he was always open and caught anything that came his way. He was targeting ten times in the game, and his longest reception of the game came with three minutes left in the fourth quarter on the 38-yard, game-winning touchdown pass from Josh Allen. Brown would set a Bills record, as he had the most receiving yards in a debut with Buffalo. This is the type of player Allen was missing last year, and if Brown can continue to do this throughout the year, it will cause teams to pay more attention to him and that will open the door for other players to step up.

Taking home the honors for defensive MVP of week one is a player Bills fans have been waiting for to take over, Shaq Lawson. This was Lawson’s best game so far with Buffalo and if he continues to play like this, it could mean a big pay day him at the end of the season. Lawson had four total tackles, including one of the four total team sacks on the day. On top of that, Lawson was big in the pass defense, as he batted down a pass at the line and disrupted the Jets offense in more ways than one. He seemed to be all over the field and made plays that Bills fans have never seen before from him. Lawson has the talent, and after being drafted he was dealing with injuries and could never get it going, but if this is a sign for what is to come in his game, the Bills defense could be taken to a whole other level this season.

I am sure most Bills fans wanted to see Ed Oliver crush the Jets offensive line and put Sam Darnold on his back, but we did not see that yet, instead we saw the future for Buffalo, as third round pick Devin Singletary was electric in the second half for the Bills. He would only have four carries from the line of scrimmage, but he made them count, as he rushed for 70 yards in his first NFL start. Singletary was also used in the pass game, as he had five receptions for 28 yards. His elusiveness and speed made him look like a young Lesean McCoy and proves the faith that Beane and McDermott have in the young running back. Singletary averaged 17.5 yards per carry yesterday and really kick-started the Bills offense to finish off the comeback win. The third-round pick is an early favorite for the biggest steal of the draft.

Coming into his third season with Buffalo, DE Trent Murphy produced big time in week one. He may not have the best stats on paper, but he put pressure on Darnold multiple times, and was a big contributor in the run defense. The Bills should be ecstatic with how their defensive line played in week one. Murphy, like Lawson batted down a ball at the line as well as recovered the ball to secure the win for the Bills in the fourth quarter. Murphy had a stellar 2016 with the Redskins before tearing his ACL, and the Bills would love to have him get back to those ways to make this defense even better than they were last season and he is off to a great start after one week. 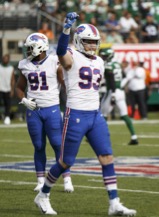 Need more out of:

Cole Beasley was brought into this team with the goal of having him be the safe option for Allen, and a guy who would be reliable enough to catch everything and gain yards. The Bills offense did not see that against the Jets. He was the second leading receiver on the team, with five catches for 40 yards, but more will be expected out of him this year. Beasley was targeted nine times in the game but all five of his catches came in the first half. He did not produce in the most important time of the game when Buffalo was staging a comeback. Beasley and Allen seem to have a great connection off the field and in practice, but may need a few games to get it right in full-time NFL speed. Next week against the weak defense of the New York Giants may be a great time for Cole Beasley to break out and become the team MVP for week two. 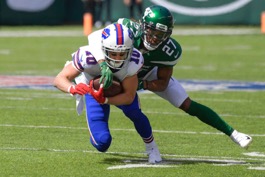