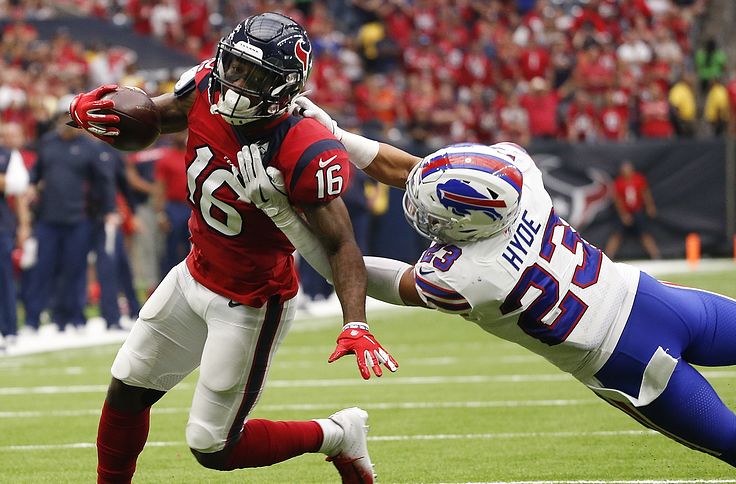 Kick-off for Week 1 has already started! So, allow me to breakdown the concept of relative injury risk and how to view fantasy football players before the madness continues.

Broadcasters, talks show hosts, and podcasters constantly refer to players as “injury prone” or “fragile.” I have an issue with this, as it’s usually unfair and lacks context. I dare you, (anybody throwing those labels around) to be in several mini car crashes for two hours every Sunday and allow me to judge your injuries.

Okay. Now that my tilt is out of the way, let’s continue.

Instead, I prefer to think of players as being in four different injury categories:

I know, not the cleverest name for the categories, but bear with me. Instead of describing each one, I’ll walk through a few fantasy relevant players who fall into the above categories.

The unfortunate ones’ poster boy is my man crush, Keenan Allen. In 2014, Allen fractured his collar bone and sprained his ankle… on the same play. Then in 2015, he lacerated his freaking kidney; and in 2016, he tore his ACL.

Now, were these injuries in consecutive seasons and required the entire year off? Yes. Were they related in any way whatsoever? Absolutely not. Since 2017, Allen has been a top WR option for fantasy players in all formats and has managed to stay healthy that entire time. Allen is the definition of simply being unfortunate. It’s just a part of the game.

When identifying players who are unlucky, you can think of issues as bone or muscle, traumatic or non-contact, and in body regions. Inter-regional dependence is a concept that describes exactly how heel pain can be due to a back issue. However, when dealing with a bone fracture, a freaking lacerated kidney and then an ACL, it’s 100% reasonable to consider them unrelated.

One example of a 2018 player falling into “needs pre-hab/non-contact injury guy” is Will Fuller. Clinically, we are starting to see a positive correlation with games missed in the NFL correlating with a recurrence of MCL and hamstring injuries. As I’ve mentioned a hundred different times, the hamstrings and MCL play a significant role in protecting the ACL.

So, it stands to reason that if a player has recurring hamstring/MCL injuries, the ACL can be implicated. Well, Will Fuller had five different hamstring injuries before tearing his ACL in 2018. Marquise Lee had more than five hamstrings or MCL injuries before tearing his. Players with histories like his would benefit from a thorough physical therapy examination to determine if hamstring/lower extremity strengthening and endurance training would be beneficial.

This category has a little crossover with category 2, but I think it deserves its own spot here because I think of one specific injury type, and that is concussions. One thing I want to get across without fluff is this:

As humans, we tend to minimize the seriousness of certain matters with the use of language. However, make no mistake, concussions are brain injuries and have legitimate health implications for players after their football life ends. A single concussion puts people at twice the risk for another down the road. More important than games missed, recurring concussions can affect these people’s life in a major way down the road.

Jordan Reed is a consenting adult capable of making his own decisions. I also hope nothing but the best for him after suffering his 7th concussion. The fantasy implications are less important here, but since this is my job, I’ll just mention that for fantasy football purposes, players with more than 1-2 concussions are prone to more.

This category is a blend of the above three, but also deserves its own consideration. For example, a lacerated freaking kidney, one hamstring strain, and a single concussion are all incidental injuries in the game of football. However, viewing every individual player’s situation within relevant context and a complete history can paint a very different story. So, what are examples of incidental injuries? There are several, but the two that are at the forefront of my mind are teammates on the Texans.

His teammate, Lamar Miller, is the prime category 4 player as he was tackled and tore his ACL with contact. No amount of pre-hab is going to save you from a 300lb linemen diving into your legs. If the amount exists, I’m not sure we’ve found it yet.

In conclusion, do a throughout injury history on all your relevant fantasy players, stop using the phrase “injury prone.”