Jones Locks Himself Into the Playoffs on Throwback Night 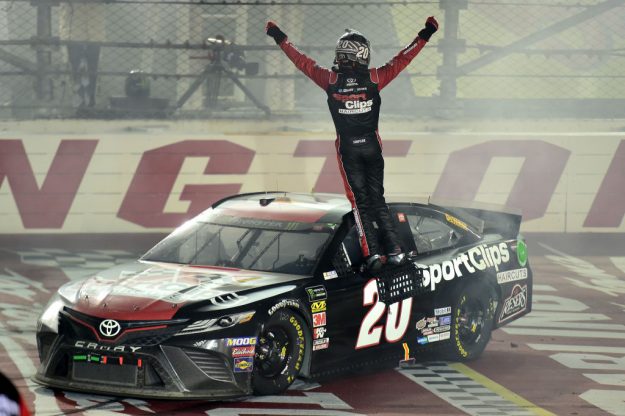 It was throwback weekend for the Monster Energy NASCAR Cup Series and with two races left until the playoffs, it was do or die for some teams. One driver who was just above got himself locked in after a 1:45 A.M. Monday morning finish.

Erik Jones has won the Bojangles Southern 500 at Darlington Raceway for Joe Gibbs Racing. Jones 20 Sport Clips Haircuts Toyota Camry throwback would start 15th in the race, lead 79 laps and held off teammate Kyle Busch in the closing laps. This is Jones second career win (first being the 2018 Coke Zero Sugar 400), his first of 2019, and also locks himself into the NASCAR playoffs.

Speaking of Busch, the 18 Snickers Toyota started all the way back in 33rd. Busch would claim stage two, lead 118 laps, and would finish third. Martin Truex Jr in his 19 Bass Pro Shops/Tracker ATVs/Boats Toyota that threw back to his Busch series championship back in 2004 finished 15th.  Denny Hamlin in his 11 FedEx Toyota throwback to Darrell Waltrip was involved in an accident later on. Hamlin finished 29th.

Three of the four Stewart Haas cars were throwing their scheme back to Tony Stewart and his championship days. Kevin Harvick was the one who ran a throwback not related to Stewart. The 4 Busch Beer/Big Duck Hunter Ford Mustang did not lead a lap but would finish fourth.  Clint Bowyer had a big points day as the 14 Rush Truck Centers/Mobil 1 Ford thrown back to Tony Stewart’s 2011 come out of nowhere championship season led and lap and finished sixth. Bowyer moves from 17th out of the playoffs to 15th in the playoffs. Daniel Suárez paint scheme was close to that of Stewart’s 2005 championship. The 41 Haas Ford finished 11th. Aric Almirola in the Smithfield Ford that threw back to Stewart’s 2002 championship car struggled all night as he would finish 17th.

Hendrick Motorsports started out good but as the race went on, things began to change. Jimmie Johnson in his 48 Ally Chevrolet Camaro was trying to get a win or a top five to put himself back into the playoffs and it was looking as if that was going to happen. Johnson also led three laps during that time. However, after being in the top five for most of the night, Johnson would be involved in the same crash that Hamlin was in. Johnson finished 14th and sits 18 points below 16th. Alex Bowman in the 88 Axalta Chevy finished 18th. Chase Elliott in the 9 NAPA Auto Parts Chevy throwback led nine laps and finished 19th. William Byron in the 24 Days of Thunder City Chevrolet Chevy throwback won the Busch pole but finished 19th.

The next race will be the regular season finale at Indianapolis Motor Speedway for the Brickyard 400.  We will see who will get the final two spots.