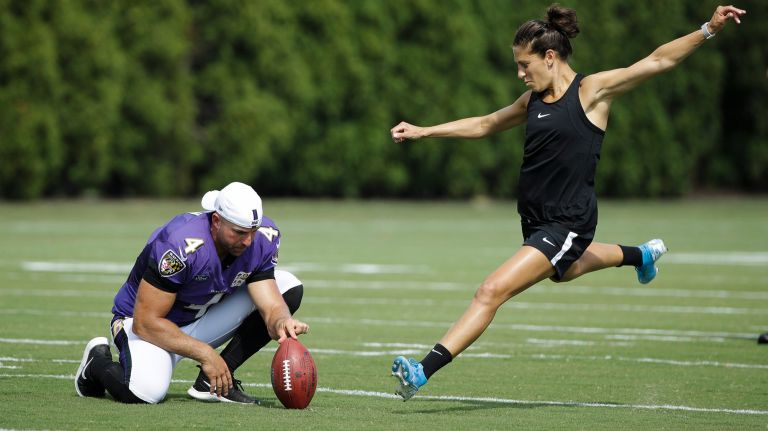 USWNT World Cup Champion, Carli Lloyd, stole the NFL spotlight during her attendance at the Philadelphia Eagles and Baltimore Ravens joint practice last week. After their practice, Lloyd booted a 55-yard field goal right down the middle of the field goal post. Ever since this video became viral, it seems that everyone forgot all about the NFL preseason games.

If Carli Lloyd didn’t have previous engagements with the USWNT’s friendly game against Portugal, then she would have considered being a kicker in the Eagles’ preseason game. Carli Lloyd stated that soccer is her priority, but she is open to entertaining the idea of kicking in an NFL preseason game. After her goal in the Portugal friendly, she celebrated with the “Fly, Eagles, Fly” celebration. Several NFL organizations have offered the two-time FIFA Player of the Year to kick for them, but the organizations have remained anonymous.

Carli Lloyd as an NFL kicker could break down several barriers for females in sports. The NFL has forever been treated as a male-dominant organization, as if they hold a sign in their front office stating, “No Girls Allowed.” But within the past decade, women have knocked down that barrier, piece by piece. Women are now refereeing in the NFL, and hold positions in several NFL offices, but never has a woman put on pads and cleats. Young girls have played in their youth football teams or high school teams in many positions. Toni Harris is another woman who has broken barriers in the football world. She is the first female football player at a skilled position to earn a football scholarship, first female football player in East Los Angeles College’s history, and the first female football player to appear in a Super Bowl advertisement. If Toni Harris can knock down barriers in college, Carli Lloyd has the resume to break down barriers on the professional level.

The three-time Olympic Gold Medalist, two time FIFIA World Cup Champion, knows what it takes to be a winner, as an individual and also as a team. She’s received support from both men and women, and even current and ex-NFL players. Kurt Warner told TMZ earlier this morning to “Give her a shot!”. Steven Hauschka, kicker of the Buffalo Bills, said “If it’s something she really wants to do, not only will I help her out—if she wants it—but I hope she goes for it”. On the other hand, boys will be boys, and continue to abide by the “No Girls Allowed” rule. Keenan Allen of the Los Angeles Charges stated that, “Sound sweet til somebody block the kick and all of a sudden she on defense…would be like the stampede scene in The Lion King movie.” Kicking a football on an open field without any form of pressure and challenge is a lot different than any form of NFL competition. Temperatures, wind gusts, being rushed by the defense, adjusting to a two-step kick, kicking angles, and simple pressure of whether it is a close game or not are just a few challenges that Lloyd would have to face if she wants to become an NFL kicker. Just like Hauschka, stated, “there’s little room for error for kickers in the NFL.” Kickers receive a lot of criticism in the NFL because any time they miss within reasonable distance, most people comment saying, “you only had one job.”

But what all does Carli Lloyd have to lose? She’s 37 years-old with so many soccer awards, that she most likely can’t count. She’s an important piece of the USWNT’s success, so her spot on the team isn’t going anywhere. If she is successful in her NFL debut, it could become a hobby for her, not a career. It’s also good publicity for the organization that decides to take that chance, and also can provide more coverage and support for the National Womens’ Soccer League. If she doesn’t succeed, she can go back to her superstar life in the NWSL and with the USWNT, and the NFL can go back to their male dominated sport.