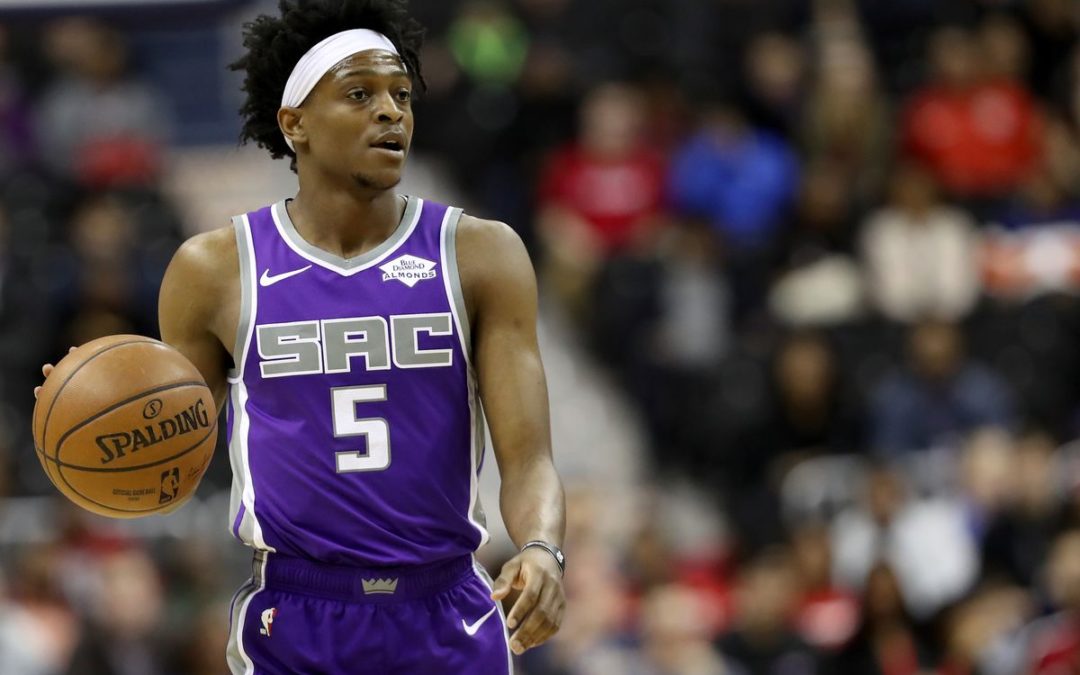 De’Aaron Fox made a huge leap in his 2nd season in the NBA. In his rookie season, he averaged 11.6 points per game, 4.4 assists and 1 steal on 41% shooting from the field and 30% from the three-point line. His rookie numbers were good, but not enough to get him onto an All-Rookie Team in 2017. Although his rookie numbers weren’t the best, he was jaw dropping to watch. He was clearly the quickest player on the court every night. He was out of control at times, but it was promising to see such speed and explosiveness.

This past season, he made a big leap in his game and had a case to be the NBA’s Most Improved Player of the Year. In his 2nd season, he managed to put up 17.3 points per game, 7.3 assists and 1.6 steals. He is the 3rd player in NBA history to average those numbers in their 2nd season. The other two players were Isiah Thomas and Magic Johnson. Two all-time great point guards. On top of his improved scoring and passing, he also found a way to improve his efficiency. He shot 46% from the field and 37% from deep. That is a 5% increase from the field and a 7% increase from the three-point line compared to his rookie season. To have that big of a jump from your rookie season to your sophomore season is remarkable. Fox increased his efficiency while playing more minutes, shooting more shots and dealing with a higher usage rate. This means the more opportunities he gets, the better and more efficient he gets. You don’t see that with many NBA players. Usually, when a player has more time with the ball in their hands, their averages might increase but their efficiency inevitably drops. This was not the case with Fox.

To go along with Fox’s stellar 2nd season numbers, Fox ranked 4th in the NBA in total assists and 6th in total steals. To do this in his 2nd season, after not making an All-Rookie Team in his 1st season is incredible. If Fox can make the jump to 20 points per game, 9 assists and 2 steals while keeping or increasing his field goal and three-point percentage, you could argue that De’Aaron Fox is a Top 5 point guard in the league. Sure, some point guards that are fringe Top 5 point guards might score more points, like Kemba Walker and D’Angelo Russell. But these players don’t compare to the Fox when it comes to playmaking and defense. Fox is a superior playmaker and an exceptional defensive player. To me, Fox will better than both of those point guards once the 2020 season ends. Other players such as Chris Paul and Kyle Lowry are passed their prime and are sure to see a downfall in their numbers. Paul is in the first stages of becoming a journeyman at the age of 34. Kyle Lowry, coming off an NBA Championship, didn’t even outplay Fox last season. Averaging 14 points per game, along with 9 assists on 41% from the field and 34% from the three-point line isn’t enough to eclipse what De’Aaron “Swipa” Fox did last season. That already puts him ahead of 4 players that would be considered a Top 5 point guard in the NBA.

There is no doubt in my mind that Fox can make yet another jump in his 3rd season. Coach Steve Kerr of the Golden State Warriors thinks the same, saying, “He’s so talented [and] so gifted. He’s still such a young player that he’s got a whole other level he can get to… He’s very coachable [and] he’s only going to get better.” This is coming from a guy who watches 2-time MVP Stephen Curry play daily.

People around the NBA not only marvel at his talent, but his incredible speed as well. Fellow NBA guard and 3-time All-Star Kemba Walker was in shock when seeing the speed of De’Aaron Fox at the USA Basketball training camp, saying, “Oh my goodness. He is super-fast. His quickness is crazy. His end-to-end speed is ridiculous. That’s scary if he’s gotten faster. The thing about him is he’s fast, but really under control.” To get recognition from such a great point guard bodes well for the young star.

Things are only looking up for the Kings’ point guard. If things go as planned, we could be seeing Fox lead the Kings to the playoffs this coming season. Only time will tell with this future NBA superstar.