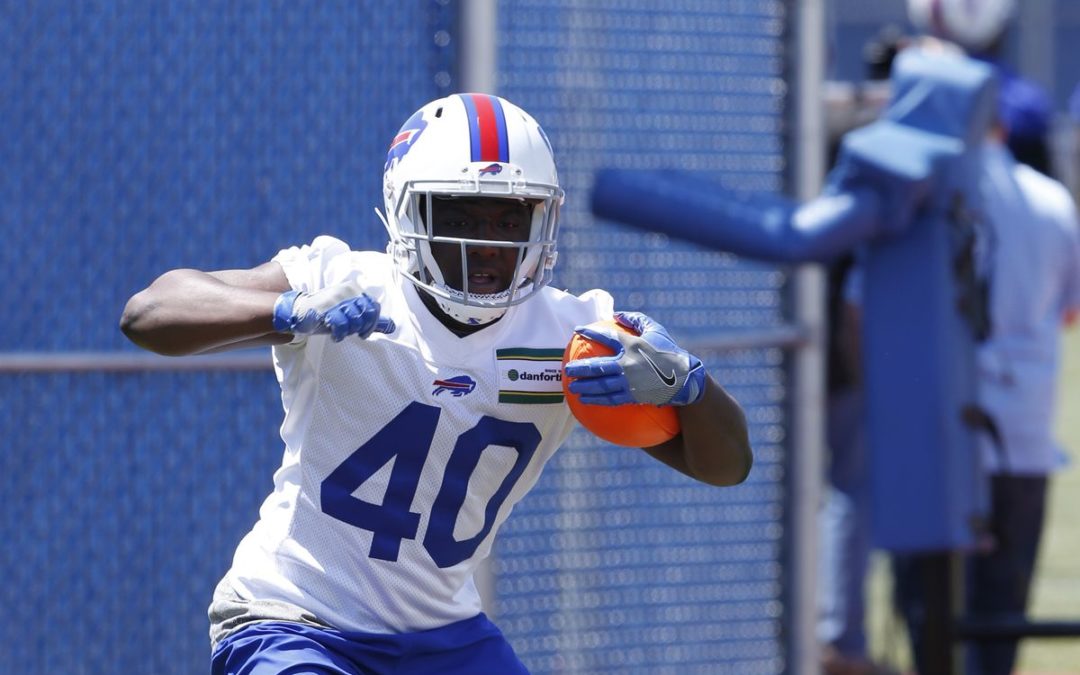 Each and every year, no matter where you are, where you are from, or which team you support, fantasy football sweeps the nation. A couple of things always hold true in the world of fantasy, “If you ain’t first you’re last!” Well yeah.. that’s not always true. You may get lucky and get the first pick or you may get unlucky and get say the 7th pick in a 12 man league like I did in the Unwrapped Sports Fantasy League (RIGGED). All jokes aside, one of the most true things in fantasy football is that there will always be SLEEPERS.

If you’re new to the fantasy football world or just not really aware of the terminology, a sleeper is most simply defined as a player taken in the late rounds of a fantasy draft or even sometimes undrafted. Whether that’s a vetera player who just goes overlooked or a rookie who could be searching to take the number one spot in a high powered offensive backfield. Some of my favorite sleepers in the past years have been Alvin Kamara- stud RB for the Saints, James Conner- RB for the Steelers, Tarik Cohen- RB for the Bears and Adam Thielen- WR Vikings. You may look at that list and think “those aren’t sleepers” well yeah now they’re not but they were at one point and now they’re gems. Most of these guys with the exception of Cohen are first round picks or no later than late second early third. Enough of the jibber jabber, let’s get into my sleeper list of the 2019 Fantasy football season.

Reason to draft: ADP: R13P10- Chiefs head coach Andy Reid is now looking at his backfield as a running back-by-committee situation. He has mentioned Damien and Darrel Williams, veteran Carlos Hyde and rookie Darwin Thompson as players who will all get an opportunity to prove themselves. Out of all of the players on the roster, Thompson undoubtedly has the highest ceiling, especially when we consider what he can do in the Chiefs’ explosive offensive attack. Reid has had nothing but great things to say about the rookie. It was recently noted that Thompson has now “jumped” Carlos Hyde in the RB Depth Chart.

Reason to draft: ADP: R12P2- Playing behind Veteran back LeSean McCoy, but has potential to take the starting job. Singletary rushed for 4,287 yards and 66 touchdowns across three college seasons, doing exactly what you want to see from a skilled player in a weak conference.

Reason to draft: ADP: RD13P1- The Baltimore Ravens signed running back Mark Ingram as a free agent this offseason and he will likely be the primary ball carrier for the team in 2019. That being said, they drafted Hill for a reason. If he can continue to show out as he has through preseason, it is going to be difficult for the Ravens to keep their rookie back on the bench. Hill has been receiving comparisons to the likes of Darren Sproles. Sproles was once an electric fantasy FLEX option.

Reason to draft: ADP: RD10P12- I’m just going to leave this here: Brad Evans of Yahoo Sports: “It’s remarkable how quickly Emmanuel Sanders has recovered from the late-season achilles injury. He’s spry, fast in space — looks like a player who didn’t lose a step. It’s rather nuts, really.- sensational value” Sanders was the number 12 fantasy receiver in PPR Format until tearing his Achilles.

Reason to draft: ADP: RD10P8- Jackson, back with the Eagles is extremely intriguing for one sole reason, Carson Wentz is not afraid to throw the ball deep. Having weapons around him like Ertz, Jeffrey, Agholor and the backs with Howard, Sanders will undoubtedly free up space for Desean to run freely open down the middle of the field.

Reason to draft: ADP: RD13P10- Hasn’t had great years since the departure of Kirk Cousins, but he’s on a new team with a new quarterback. The young, potentially breakout QB Sam Darnold. Kind of similar to the situation with DJax, Crowder has a QB who is not afraid to throw it deep, Crowder is an overlooked slot WR in the NFL, not to mention fantasy. Robby Anderson, Le’veon Bell, and more will make it easier for Jamison to do what he does best, find the seams and pick up chunks of yardage.

Reason to draft: ADP: RD11P2- The departure of AB most likely has a lot to do with this ADP but, that’s almost criminal. Ben is a year to year consistent fantasy option. You can trust him any and all formats. He may throw 5 interceptions, but you can almost guarantee he’ll throw 6 TDs as well. Breakout WR JuJu Smith-Schuster, along with RB James Conner, prove to be great compliments to an already great QB.

Reason to draft: ADP: RD13P1- Coming off of a 30 TD, 10 INT season with his first year as the Vikings signal caller, Captain Kirk is ready to prove the doubters wrong. He was underwhelming last season but year two in an explosive offense can turn things around. Having stud RB Dalvin Cook, WRs Adam Thielen and Steffon Diggs price crucial to Kirk’s success.

Reason to draft: ADP: RD11P9- Prescott scored the 10th-most fantasy points among quarterbacks in 2018, which followed up finishes of QB10 in 2017 and QB6 in his 2016 rookie campaign. Prescott’s numbers also made a sharp jump after the Cowboys acquired wide receiver Amari Cooper in a blockbuster trade with the Oakland Raiders, as he no longer had to try to produce with Cole Beasley as his top target. Fine value where Prescott is being drafted now, but that top-10 upside is what really makes him an exciting pick.

Reason to draft: ADP: RD14P8- Andrews is a Lamar Jackson favorite — he was targeted 20 times for 13 catches and 308 yards after the then rookie was promoted to starter last year. Expect him to be even more of a factor in Jackson Year 2. Many reports out of Ravens camp say he has been the “star of the training camp,” receiving more targets than any other Baltimore pass-catcher.

Reason to draft: ADP: RD14P10- Reed has posted top 12 tight end numbers in 49.2 percent of his games. That’s ahead of guys like Zach Ertz, Greg Olsen, and Hunter Henry. The issue has been staying on the field, as he’s missed 31 games in his six years in the league. That’s the only reason he’s falling as far as he is in drafts. But once you get outside the top-seven or eight tight ends, you’re likely going to wind-up streaming, so why not take a flier on a guy who presents top-five upside when healthy? Speaking of injuries however, Reed is in concussion protocol after being drilled in Thursday’s preseason game against the Atlanta Falcons, definitely a situation to monitor.

There will always be sleepers and undrafted talent that comes out and proves why they shouldn’t be overlooked. It’s your job to find out why they should be on your team and why you should stash them on your bench until they’re given the opportunity to take off. I hope this helps you win some of your leagues as well as keep on winning leagues for years to come. Sleepers are key to look at in redraft leagues but also keeper leagues. From myself and Unwrapped Sports, good luck this year and don’t get caught sleeping.