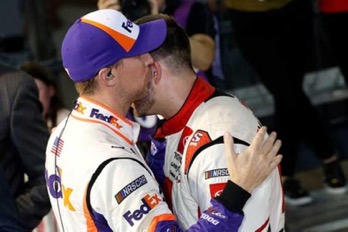 It was a surprising night, but there would be no Cinderella story at the end.

Denny Hamlin has won the Bass Pro Shops/NRA Night Race at Bristol Motorspeedway for the Monster Energy NASCAR Cup Series. The 11 FedEx Freight Toyota Camry for Joe Gibbs Racing would take the lead to win from the pole. This is Hamlins fourth win of the season, his second at Bristol, and the 35th of his career. Hamlin led 79 laps.

One of Hamlin’s teammates Kyle Busch was a lap down early on at a track that he has dominated in the past, but would lead 30 laps and finish fourth in the 18 M&M’s Toyota.  Martin Truex Jr., in the 19 Tracker Off Road/Bass Pro Shops Toyota, led 52 laps and finished 13th. Erik Jones in the 20 Stanley Toyota finished 22nd leading 23 laps.

Stewart Haas Racing had a weird night that was just crazy. Clint Bowyer in the 14 Peak Lighting Ford spun out, finished seventh, but is now two points out of that last playoff spot.  Daniel Suárez in the 41 Haas Ford finished eighth. Aric Almirola wrecked twice in the 10 Smithfield Ford finishing 29th. Kevin Harvick in the 4 Busch Beer Ford looked like he was going to win as he was leading at the time. However, a clutch failure ended his night as he finished last (39th).

Matt DiBenedetto was the underdog coming in. It was announced the same week before Bristol that he would not return to Leavine Family Racing. During driver introductions, he came out in a rocky uniform with the rocky theme playing. The 95 Toyota Maintenance Toyota led a race high 93 laps and looked like he was going to get that first career win. That is until he made contact with the 6 Acronis Ford of Ryan Newman for Roush- Fenway Racing who was blocking the leader trying not to go a lap down. That would ruin his night as Hamlin would pass him for the win.

The next race will be the Bojangles Southern 500 at Darlington Raceway where we will see which better throwback paint scheme wins.