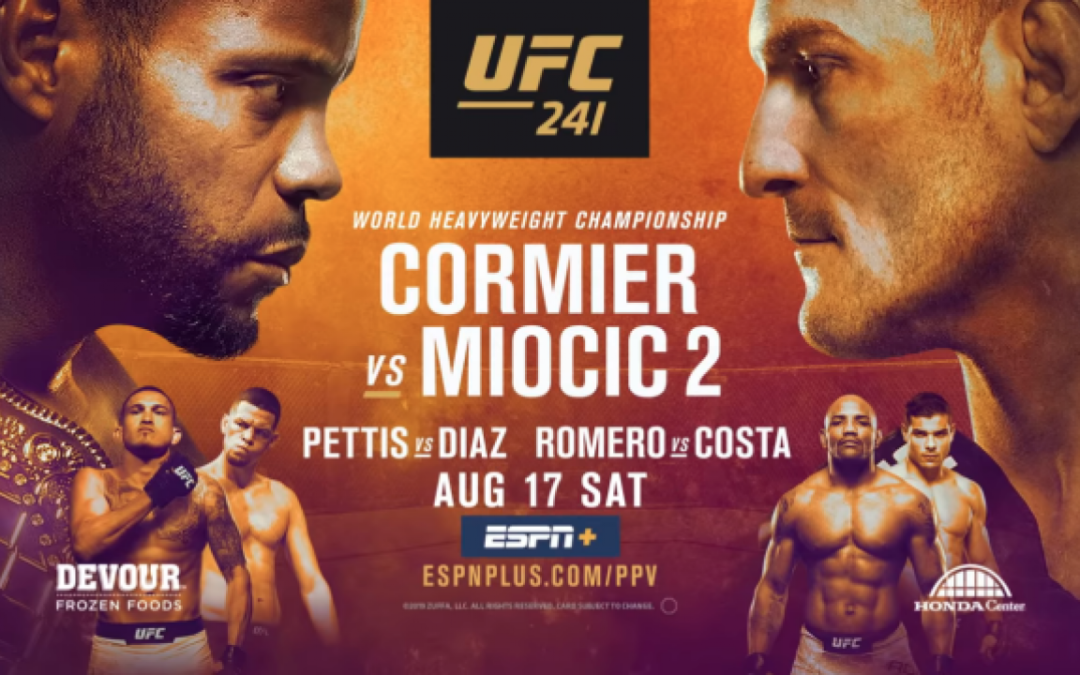 UFC 241 from Anaheim, California airs this Saturday, August 17th, where the Heavyweight Championship of the world will be on the line.  Current champ Daniel Cormier will look to defend the HW belt for the 2nd time by way of rematch, fighting Stipe Miocic, the man he took the belt from. The former champ Miocic has not fought since his 1st round KO loss to Cormier last summer, and is looking to regain his status as one of the greatest heavyweights in the promotions history.

Co-headlining the event will be the return of Nate Diaz, who comes off a near 3-year layoff to fight former Lightweight champion Anthony Pettis at 170lbs. This will be the 2nd Welterweight fight for Pettis, with his first ending in a 1st round KO of Stephen “Wonderboy” Thompson earlier this year. The two have a history of dealing with trash talk from back when Pettis was the champ at 155, with Pettis calling this fight “personal.”

Also on the main card is an explosive Middleweight matchup between Yoel Romero and Paulo Costa. Both fighters have had plenty to say about each other, and have also been out of the octagon for sometime. With potential title shot implications on the line, Romero and Costa will no doubt provide fanfare and fireworks.

Along with these fights and others, here are my picks for UFC 241, using the DraftKings Sportsbook odds.

Cifers looked good in her last outing vs. a good striker in Polyana Viana, while her opponent Jodie Esquibel has had a tough time in the UFC, losing her first 3 fights in the octagon so far.

Klose is a very good striker, and has won 4 out of his last 5 fights.  I don’t see his opponent Christos Giagos having an answer for the fellow Lightweight.

Lastly, Raphael Asssuncao’s most recent outing was a KO loss to Marlon Moraes, who is undoubtedly one of the best fighters in the world. I believe he bounces back well against Cory Sandhagen, who is coming off a split-decision win vs John Lineker his last time out.

Heinisch stuck out to me in his last fight vs. Antonio Carlos Junior, and I expect him to have no trouble landing blows on Derek Brunson, who seems to have been regressing in his last few fights. He was knocked out by Ronaldo “Jacare” Souza and Israel Adesanya in back to back fights, and followed that with a less-than-impressive win against Elias Theodorou.

I know what you’re thinking. These guys are giants at Middleweight, hit hard, and are bound to put the other to sleep. I beg to differ. While Costa has shown that he can get hit, most notably being dropped by Uriah Hall, I expect to see an improved and more tentative striker vs Romero. Romero will also respect the power of Costa, yet I believe he does enough to get it done on the cards. If you’re feeling a KO, Romero is +120, while Costa is +210.

Nate Diaz has only been KO’d once in his career. However, with the way Pettis looks at 170, coupled with the fact that Nate hasn’t fought in almost 3 years, and gets hit a lot, I can see Pettis landing hard enough to take Nate out (if he doesn’t break his hand first.)

These odds aren’t spectacular, but it’s what I would put my money on above all else. While DC got the KO the first time around, I believe he also put himself in danger of Stipe landing some big blows. I have faith that Stipe’s time off has helped him rest after a busy stretch of title defenses, and allowed him to sure up some holes that DC saw and exploited in their first fight.

I don’t expect this fight to go past the 2nd round.

You can order and watch the UFC 241 PPV on ESPN+ this Saturday.