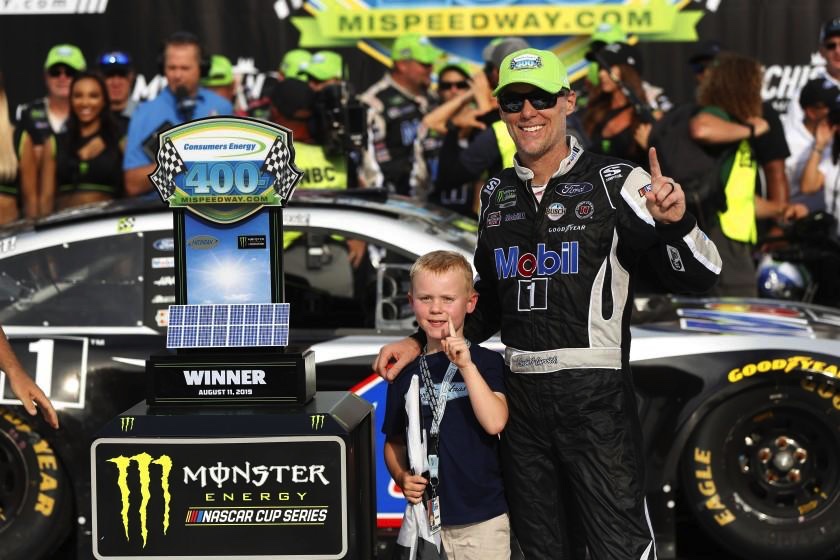 He was happy when he one this race a year ago and was happy this time around defending his August win.

Kevin Harvick has won the Consumers Energy 400 at Michigan International Speedway for the Monster Energy NASCAR Cup Series. The 4 Mobil 1 Ford Mustang for Stewart Haas Racing led 22 laps and passed Joey Logano to clinch his second win of the season, his third at Michigan, and his 47th cup series victory of his career.

His teammate Daniel Suárez came to the front late finishing fifth in the 41 Arris Ford Mustang. The other two were not fortunate however as both were involved in wrecks. Aric Almirola was involved in a wreck with both Richard Childress Racing driver’s Austin Dillon and Daniel Hemric during the end of stage two. The 10 3D System Ford finished 33rd. Clint Bowyer in the 14 Cure-Colorado State University Ford made contact with Paul Menard late forcing Bowyer to finish 37th.

Joe Gibbs Racing had a solid afternoon. Denny Hamlin finished second in the 11 FedEx Office Toyota, leading six laps. Martin Truex Jr would not disappoint in the 500th career start as he would fight all the way from the rear due to failing inspection early on. The 19 Auto Owners Toyota led 43 laps, won stage one, and finished fourth. Kyle Busch rallied to finish sixth in the 18 Interstate Batteries Toyota leading three laps and would win stage two. Erik Jones finished 18th in the 20 DeWalt Toyota.

Team Penske looked like they were the team to beat at Michigan, but fuel mileage came into play late. Joey Logano who won back in June led 52 laps in the 22 Shell/Pennzoil Ford, but had to pit with three to go. Logano finished 17th. Brad Keselowski had a weekend as he would win the Busch pole, save his 2 Discount Tire Ford from hitting the wall after blowing a tire in what seemed to be 180 miles per hour, led a rice high 66 laps, but just like his teammate Logano, would have to stop for fuel at the end. Keselowski finished 19th. Ryan Blaney would also be fighting upfront all day leading three laps, but the 12 Moen/Menards Ford would finish 24th.

Ryan Preece probably had one of his best finishes of the season. The 47 Kroger Chevrolet Camaro for JTG- Daugherty Racing finished seventh. His teammate Chris Buescher finished 14th in the 37 Kroger Fast Start Chevrolet Camaro.

The next race is the Bass Pro Shops/NRA Night Race at Bristol Motor Speedway in which we will see if Kurt Busch can defend his night race win of last season.