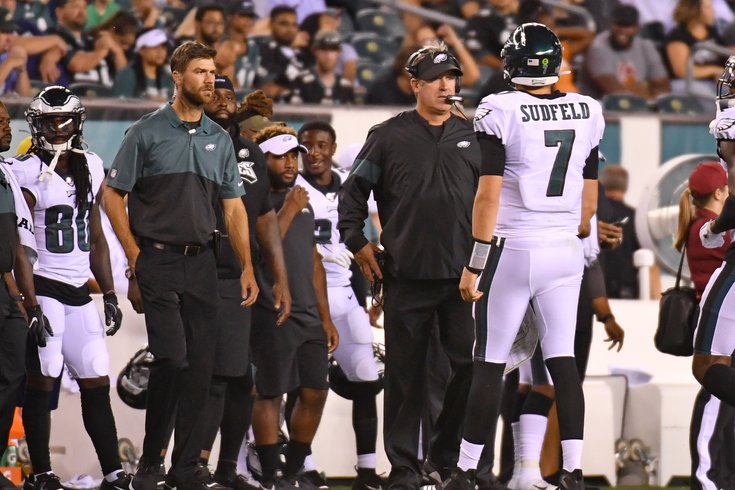 The Philadelphia Eagles started their season this week on Thursday and though it’s hard to learn a lot from the preseason I think there were some things we should look at. Overall there was more good than bad even though the score would make you think otherwise, and I urge fans not to fall into the classic preseason trap of over reacting. So let’s take a look at the game and certain players that stood out and ones that, well, didn’t stand out.

The important thing to remember was that the Eagles pretty much started out with all of the second stringers playing on both offense and defense. They even had some third stringers on defense starting against the Titans first team. This helps make sense of the final score and the overall performance. All in all though I liked a lot of what I saw out of the Eagles here are some players that stood out.

Dallas Goedert: Wow! Dallas dominated the Titans defense with three catches for 50 yards. What he showed Thursday night was something we have struggled with in the past which is YAC (yards after the catch). It felt like every time he touched the ball he was going to break the first tackle and make his way down the field. Another great sign was that his routes were much more crisp allowing Nate Sudfeld to crave up the Titans defense. I really hope this means we see more of Goedert this year. Certainly a two tight end set with Ertz and Goedert will keep opposing defensive coordinators up at night.

Nate Sudfeld: I was very impressed with Nate though he struggled at times and some of his throws were off he still managed to pull off some pretty impressive plays. We all know by now that he ended up getting hurt and thankfully it isn’t that serious. Before that Happened he went 10/18 with 177 yards and a touchdown pass. That touchdown pass was a thing of beauty. He hit Marken Michel perfectly in stride on a deep post. However it wasn’t only that he hit him stride that was impressive it was how he did it. He threw a beautiful floater knowing that he had to get the ball above the defenders in order to complete the pass. I know it sounds easy but it’s something that a lot of quarterbacks struggle with in the NFL. The other thing that was impressive was his ability to use his athleticism to scramble and extend plays. I’m not ready yet to say that he is a top tier backup but he certainly showed the ability to be a serviceable back up for Carson Wentz.

Andre Dillard: I know offensive line is boring for a lot of people to talk about, but Eagles fans should be very excited about our future left tackle Andre Dillard. He certainly showed why he was the best pass blocker in college last year. He is very quick off the snap and has great kick back step. For those of you who don’t know a kick back step is the left tackles first step back he takes with his left foot and is probably the most important thing in a left tackles arsenal. With a great step back a left tackle can essentially shield the quarterback’s blind side. Dillard also showed great use of his hands not just in the ability to get them on the pass rusher but in how quick he is able to it. The last thing he did that was extremely impressive was something I have only seen guys like Jason Peters, Jonathan Ogden, and Orlando Pace do. On a screen play Andre Dillard, a rookie, faked a standard pass block making the pass rusher think it was a standard pass play meaning his assignment would be the quarterback instead of the running back. It worked brilliantly the pass rusher bought it and Dillard took him out of the play. Thursday night confirmed for me what I had previously already thought he is ready to start right now.

JJ Arcega-Whiteside: I questioned this pick when it happened, but I am starting to see why Howie Roseman and the Eagles would take him. In a previous article I wrote about how he is a good player but I couldn’t see why the Eagles would take another big wide receiver when they already had Alshon Jeffery. Watching Thursday I started to have visions of Arcega-Whiteside coming in to replace Nelson Agholor and moving Desean Jackson to the slot making your receivers Alshon, Arcega-Whiteside, and Jackson in the slot. Again a nightmare for opposing defensive coordinators. He finished with just two catches and 20 yards but the reason he didn’t have more was because Goedert was playing so well as well as some bad throws. However he showed us that he runs crisp routes and has an ability to catch the ball at the highest point. I am not saying he is going to be a pro bowler but he will be a good option for Carson Wentz in the future.

Daeshon Hall: I know you may be saying: “Who is that?” Well when I was watching Thursday night I kept thinking who is number 74? Daeshon Hall, 6’6″ 275 lbs, drafted in 2017 by the Carolina Panthers in the third round. He got hurt in his rookie season and was eventually waived then spent time on the 49ers and the Texans practice squad. What I saw on Thursday was a guy that has good natural instincts and knows how to use his body. He found a way to the quarterback recording one sack. But what I saw that really stood out to me was on a couple of pass rushes he was able to engage the offensive linemen with his right arm and extending that arm making it very easy for him to create pressure. I’m not saying the Eagles found a diamond in the rough but he is a guy to keep an eye on. Certainly showed me a lot more than Josh Sweat, who I’ll touch on later, ever has.

Alex Singleton: Is a bottom of the roster guy, but could make the team for special teams. He was in the CFL for last two years and was named an all star both years. Before that he was invited to many different training camps never sticking to a roster. In the first half there was one guy always around the ball or making a tackle on special teams, it was Alex Singleton. Having a guy that can get down the field on special teams while staying in his lane is very hard and Singleton may just be that guy.  He may not make the team but if he keeps playing like this it will make it very hard to cut him

Like I said, plenty of good coming out of the first preseason game. There were a lot of players that stood out some expected some not expected. However it was not all good there are some things to worry about. Before I get to those players I will again point out that for a lot of the game we had second stringers, third stringers, and sometimes 4th stringers going against starters. Now for the bad.

Josh Sweat: Frankly I am getting really tired of hearing how much the Eagles love this guy’s size and athleticism. Great, he is big and extremely athletic but he has no idea how to use it. Part of this could be because of his extensive injury history, which would mean he has not had enough time to develop. How long are we going to wait though. All game I saw Sweat, with all of his size and athleticism, get stood up on the line and shut down. There was one play where he got chip blocked and it made him fall over. His lack of pass rushing moves is very concerning and I think the clock has run out on Sweat.

Josh Adams: First I want to say I like Josh Adams. I have liked him since Notre Dame. I like that he is from the Philadelphia area and he has all the talent to be a good running back. He has one big problem though, keeping the ball safe. He is a big strong running back but he relies on that strength too much. I’m not going to pretend to know what he thinks, but it looks like he thinks he is so strong he can hold on to the ball with out completely covering it up. Players in the nfl however are taught to punch the ball while tackling. Unfortunately for Josh Adams I think his time is up. He is going up against Wendell Smallwood who continued to show that he has a good combination of size and speed.

L.J. Fort: He was originally signed for more depth at linebacker and special teams. But with the Kamu Grugier-Hill injury he will be forced to play more on defense than expected, so clearly I want to keep an eye on him. I did not like a lot of what I saw. Now this could be because he wasn’t expecting to play that much on defense and is new to the team. What I saw watching Fort was a lot of fire, a lot of passion, but a lot of confusion. He missed his assignment many times playing against ones and twos. There was one play in the first half where he did not know where to go and who to cover, which it led to a big play for the Titans. However he did flash his strength and athleticism when he perfectly read a stretch run play took a hit from an offensive linemen but continued his pursuit and ended up with a tackle for no gain. Hopefully we can see more of this as the season goes on.

Matt Pryor: More of the same from last year. He is great in practice but bad in games. Its extremely disappointing because he has all the natural ability in the world but he seems to get in his head when game time comes around. He also lets penalties get to him. He has to learn how to have a short-term memory otherwise his nfl career will be very short. I also noticed that he has poor foot work which will get him beat everytime in the NFL. An offensive lineman is only as good as his footwork.

Overall the good outways the bad which is exactly what you want out of preseason games. The score does not really matter that much as long as you see more good than bad. It also sounds like Nate Sudfeld will be back if needed for week three but hopefully the Eagles will not need him because Carson Wentz stays healthy. The expectations are very high for this team and Thursday night won’t tell us much, especially since very few starters actually played. It was nice to get a look at the depth of this team though.