Elliott Repeats and Dominates The Glen, Gets Second Win of the Season 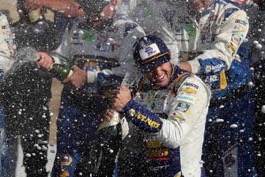 The Monster Energy NASCAR Cup Series went to their second road course of the season at the 2.45 mile Watkins Glen International Speedway and it felt like 2018 again with the finish.

Chase Elliott has repeated as the winner of the GoBowling at the Glen. Elliott’s 9 NAPA Chevrolet Camaro for Hendrick Motorsports claimed the Busch Pole, won both stages and led a race high 80 laps holding off Martin Truex Jr just like he did in 2018. This is Elliott’s second win of the season, his second at Watkins Glen, and his fifth of his career.

The other drivers were very up and down throughout the day. Alex Bowman in the 88 Axalta Chevy finished 14th, Jimmie Johnson looked like he was going to finish in the top ten until him and Ryan Blaney in the 12 PPG Ford Mustang got together. Johnson in the 48 Ally Chevy would finish 19th. Both him and Blaney exchanged words. William Byron in the 24 Hendrick Autoguard Chevy finished 21st.

Joe Gibbs Racing had a good day on the track. Martin Truex Jr in the 19 Shops/Tracker ATVs/Boats Toyota Camry led one lap and finished second.  Denny Hamlin in the 11 FedEx Cares Toyota finished third, and Erik Jones in the 20 DeWalt Toyota finished fourth. The only car to finish outside the top ten was Kyle Busch who had himself an afternoon. Busch was spun out by William Byron, would then retaliate pushing him through the bus-stop, but then Byron would ram into the 18 Hazelnut M&M’s Toyota. Busch would then beat and bang with the 43 Victory Junction Chevy of Bubba Wallace who would then wreck Busch getting a standing ovation. Busch finished 11th.

Chip Ganassi had their two cars finish in the top 10. Kyle Larson in the 42 McDonald’s Chevy led six laps and finish eighth. His teammate, Kurt Busch, in the 1 Monster Energy Chevy finished 10th.

The next race will be the Consumer Energy 400 at Michigan International Speedway Where June winner Joey Logano looks to sweep Michigan in 2019.

Results: GoBowling at the Glen