Zeke or Dak? Or Both? 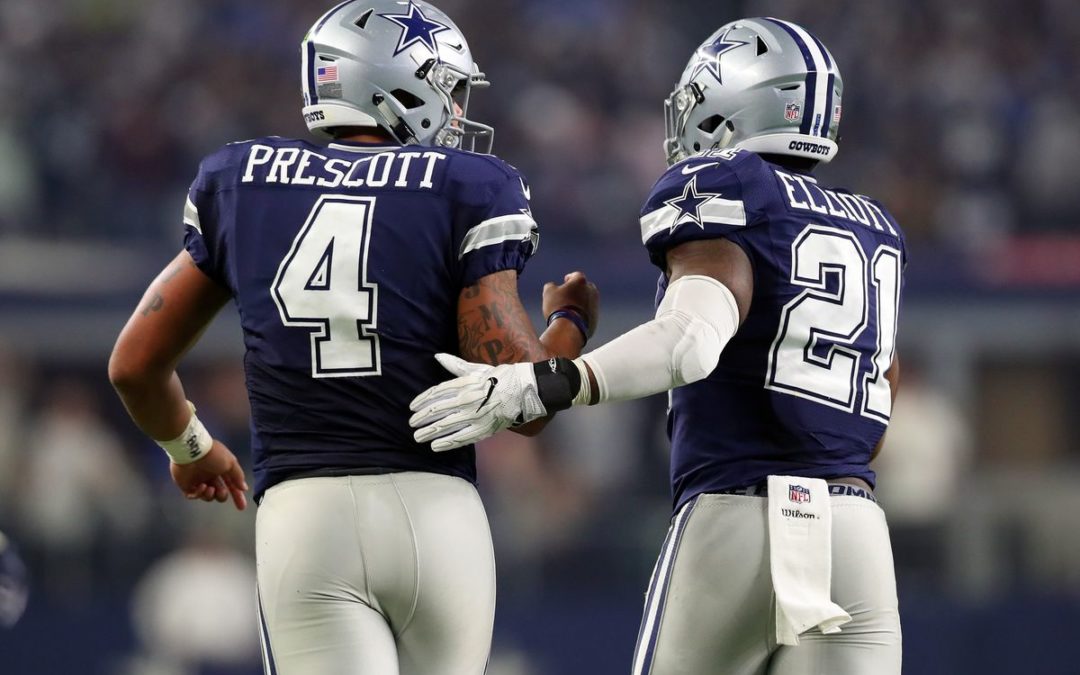 In today’s NFL, more so now than ever before, player contract extensions have been a hot button issue. The dilemma between Le’Veon Bell and the Steelers really set the media on fire and has drawn more attention to other players that are eligible for extensions. Most notably the Cowboys have their own dilemma, which is deciding whether to extend Ezekiel Elliot and Dak Prescott and deciding how much each of them should be paid. This issue has become so big in the media that I decided to think about it and pick a side.

When trying to choose between paying players it can get very tricky since there are many factors. Some factors are positional need, value they have with the team, and the overall market which dictates how much players get paid. The Cowboys situation is even trickier because of the team dynamic and the uncertainty about Dak and Zeke. The uncertainty with Dak is about his ability to carry a team, throwing downfield, and the ability to be THE GUY. The uncertainty surrounding Zeke is whether or not he can stay out of trouble and on the field. Zeke has had a number of off-the-field issues; one leading to a past suspension which leads a team to question his ability to handle himself as a professional. Giving millions of dollars to someone who can’t be mature enough to get out of their own way is a decision that has to be second-guessed.

The way I see it, it comes down to paying your above-average quarterback who needs a good supporting cast to win, but is a leader, or paying possibly the best running back in the game where there will always be issues with him off of the field. Looking back at the way the Cowboys handle eccentric personalities, history would tell us they are going to give Zeke the boatload of cash instead of Prescott. In this case, I think history is wrong. I believe the Cowboys will chose to pay Dak ahead of Zeke and it’s the right thing to do. That may sound crazy to some who think Dak is a glorified C+ starter, but it’s what is best for the franchise.

As much as people hate Dak, you can’t deny the kid is a winner. He’s brought the Cowboys to the playoffs twice now in three years. He also has brought stability to an organization that needed it after Tony Romo kept getting hurt. Dak came right in as rookie and added leadership to the Dallas locker room. He leads his team on and off the field as a consummate professional. Since he has been the starter, he’s lead Dallas to 14 game winning drives according to Pro Football Reference, which is incredible since they are a team that was known to choke games away. What Dak brings to the team can’t be measured with numbers. His stability and leadership supersedes the questions of his talent. Dak reminds me of Kirk Cousins even though their games are extremely different. They are both lower drafted players who were doubted to start their careers, but the difference is Kirk got paid off his numbers, not his intangibles. We now see that Minnesota overpaid for a guy that puts up big numbers but can’t lead his team to victory. Dak is the other way around. His numbers won’t wow you, but he gets the W at the end of the day and that’s why he should be paid.

I’m not saying Ezekiel Elliot shouldn’t get paid, but Dak should be the team’s priority. They have found a leader in Dak who keeps the team together even when Zeke draws negative attention. Zeke will get his money and will deserve every penny of it, but he isn’t as vital to the Cowboys’ long-term success as Dak. When you get the quarterback position right in the NFL, you hold onto him no matter what.