Hamlin Gets His Fifth Win at Pocono, Third Win of the Season 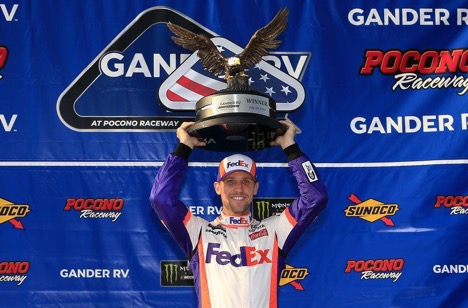 He won this race back in 2010, gets his third win of the season, and his fifth win at the 2.5-mile tricky triangle.

Denny Hamlin has won the Gander RV 400 at Pocono Raceway for the Monster Energy NASCAR Cup Series. This is his 34th career cup series victory. Hamlin was not the dominant car on the day however as the 11 FedEx Ground Toyota for Joe Gibbs Racing would lead 32 of the 163 laps in the race.

Two of Hamlin’s teammates finished right behind him. Erik Jones in the 20 Reser’s Main St. Bistro Toyota nearly won the race, but would finish second leading 10 laps. The next car was Martin Truex Jr in the 19 Bass Pro Shops/Tracker Off-Road Toyota did not lead a lap but finished third. The only car that finished in the late top tens was Kyle Busch in the 18 Skittles Toyota who was one of the dominant cars that would win stage one and lead 56 laps. He would get back in traffic however finishing ninth.

Hendrick Motorsports struggled to find grip with their cars.  William Byron in the 24 Liberty Chevrolet Camaro did not lead a lap but was the best finishing car. Byron would finish fourth. Jimmie Johnson was in the top 10 through the race and won stage two when Kyle Busch had to pit. Johnson in the 48 Ally Chevy would lead three laps but fell back into traffic finishing 15th. Johnson now sits 12 points outside of the playoffs in 17th. Alex Bowman in the 88 Nationwide Chevy finished 20th and Chase Elliott in the 9 NAPA Chevy would hit the wall hard on lap 83 finishing last (38th).

Stewart-Haas also had one car finish in the top ten. Last week’s winner Kevin Harvick led 62 laps in the 4 Busch Beer Gen X Ford Mustang and finished sixth. Clint Bowyer in the 14 Toco Warranty/Haas Automation Ford finished 11th, followed by Aric Almirola in the 10 Smithfield Ford finishing 12th. Daniel Suárez was in the top 15 early on before he got penalized for not restarting at top speed. The 41 Haas Ford also had a run-in with the 43 Victory Junction Chevy of Bubba Wallace. Suárez finished 24th.

Rookie of the year contender Daniel Hemric for Richard Childress Racing had a great car all day. The 8 Caterpillar Chevy finished seventh. His teammate Austin Dillon in the 3 Freightliner Chevy finished 19th.

The next race will be the Go Bowling at Watkins Glen, where Chase Elliott will look to repeat his first win anniversary. Time will be 3pm on NBCSN.