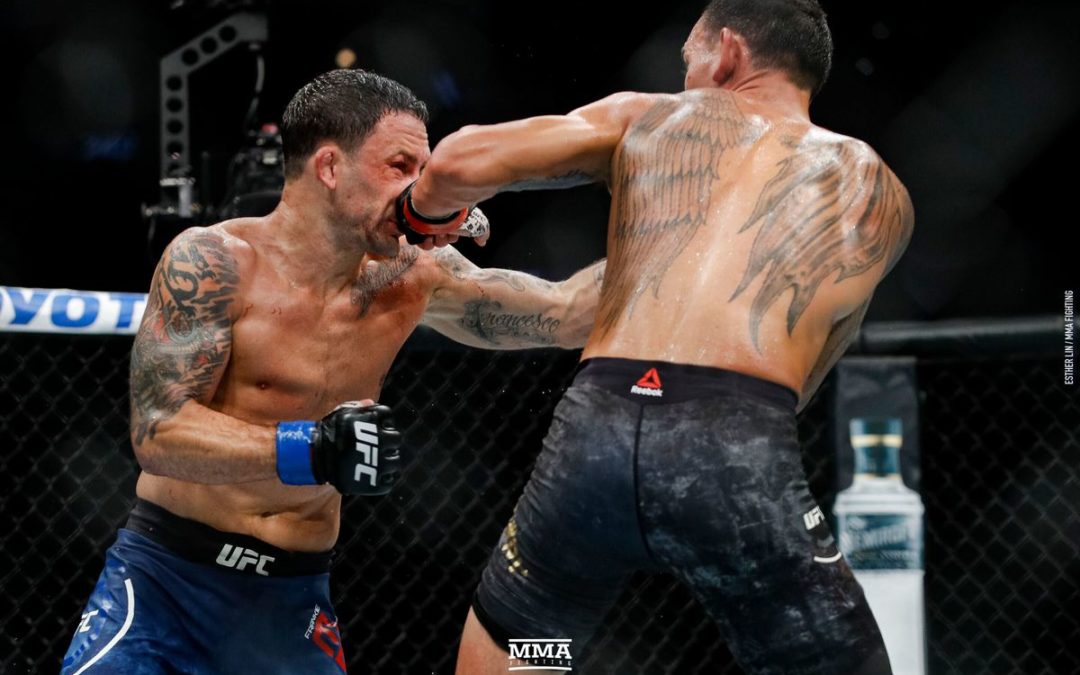 Max Holloway (21-4) defended his UFC Featherweight belt against veteran Frankie Edgar (23-7-1) via a 5-round decision victory at the Rogers Place in Edmonton Saturday night, reminding us all that the Blessed Era is still going strong.

Coming off a tough loss against Dustin Poirier (25-5, 1NC) at 155lbs for the Interim Lightweight belt this past April, in which he was outboxed and took the most damage of his career, Holloway bounced back strong in his Featherweight return vs. a tough, yet older, gritty veteran in Edgar.  Holloway utilized his size and reach advantage throughout the fight, landing shots on Edgar every time he came in to strike. Holloway was also successful in defending the takedown, only allowing Edgar to get him to the mat once, in which Holloway took no damage and eventually stood up. Holloway also kept Edgar at bay with an uppercut, landing it consistently throughout the night as Edgar ducked in to apply pressure.

In his post fight interview, Max talked about how people doubted his abilities vs. the 37-year-old veteran, and gave him some praise of his own

Edgar has now lost 2 out of his last 3 fights, and was understandably emotional post-fight.  “I expected everything he brought…he’s the best guy in the world…it’s just tough, you know?”  When asked if a potential move to Bantamweight was in the future, Edgar didn’t seem interested at the moment. “I don’t know, I need to go back to the drawing board, and regroup.  I’m not done. I got a lot of fight in me man.”

The co-main event featured Cris Cyborg (21-2) back in the win column in a decision victory over Felicia Spencer (7-1), who impressed with her toughness in just her second fight in the UFC.  Spencer ate some big shots from Cyborg, but seemed to take them better than almost anyone she has ever fought, and even cut Cyborg with an elbow to the forehead very early in the fight. Cyborg showed her strength, however, reversing the clinch any time Spencer had her up against the fence, and landing punches more effectively as the fight went on.

This could set up a rematch with Amanda Nunes (18-4), the current double-champ in Bantamweight and Featherweight, if Cyborg and the UFC are able to agree on a new deal.  Her fight with Spencer was the last on her contract.

The Fight of the Night bonus went to a Flyweight matchup between Deiveson Figueiredo (16-1) and Alexandre Pantoja (21-4).  Both fighters kept up the pace, but Figueiredo landed more effectively throughout the fight, mixing it up against Pantoja, who landed his best strikes in the final moments of the fight.

The UFC continues its streak of consecutive Saturdays in the octagon with an early card from Newark, NJ this weekend, with the prelims starting at noon.  Former Interim Welterweight Champion Colby Covington (14-1) will be back in the octagon for the first time in just over a year against Former Welterweight champion Robbie Lawler (28-13, 1NC).

The card will air on ESPN.