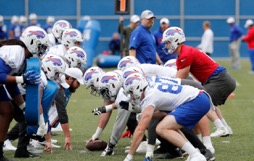 Hopes are higher than they have ever been in recent memory, as the 2019 Buffalo Bills are set to hit the field for the first time in training camp. For the 20th year in a row, the Bills will be taking the field at St. John Fisher College. A lot of question marks still remain on the team, but the City of Buffalo is expecting big things from this team come September. There will be 91 players out on the field come training camp, some big stars and some you may have never heard of, but I will give you some insight on names to keep an eye on and those who could possibly make an impact on the field this season.

The former 2018 first round pick for the Buffalo Bills has all the skill-sets to be a superstar in the NFL. The 6’5”, 250 pound 21 year old played 15 games his rookie season and led the defense in tackles with 80. Edmunds also contributed with two forced fumbles and two interceptions on the season. He, as well as his fellow teammate, Josh Allen who was a first round pick, are both poised to make a huge impact on the field this year for their respective sides of the ball. Both have the potential to become a super-star in the NFL, but Edmunds is a type of player on defense that is rare to find.

Edmunds has been compared to the likes of Carolina’s linebacker Luke Kuechly, and Minnesota’s Anthony Barr, as they can all command a defense and be in the running for defensive player of the year at linebacker. The ability of Edmunds to move laterally and his sideline to sideline speed is what sets him apart from the rest. He is a great three-down linebacker that fits perfect in the Bills 4-3 defense. Not only is he a perfect in a 4-3, but Edmunds can be used in both man-to-man coverage or zone-coverage because of his great speed and strength. He is still a raw talent at just 21 years old, but he is very scheme-transparent and has a rare talent that super-star players are made of. If Bills head coach, Sean McDermott can tap into his maximum potential, the Bills linebacking core with Edmunds and Milano will be set for years. 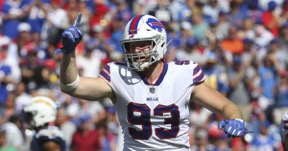 Trenty Murphy will be entering his second year with the Bills and his fifth year in the NFL. The average fan may not know his name due to injury, because back in 2017 he suffered a torn ACL while with the Washington Redskins and missed the entire season. Since then, he can’t seem to get back to full strength. Although he hasn’t had much playing time or produced much in his first season with Buffalo, he is definitely a name to remember going into the 2019 season. The addition of Ed Oliver to the defensive side of the ball could be the main reason Trent Murphy gets back to his 2016 ways. Before his injury, Murphy was a top defensive end in the league, putting up 9.0 sacks on the season with 47 combined tackles. In the 14 games Murphy appeared in for the Bills last season, he combined for 24 total tackles with 4.0 sacks, so even without being fully healthy he has still produced. If Ed Oliver can be as dominate as he did in college, and command as much attention by the offensive line, that could open big holes for Murphy. Buffalo still has DT Star Lotulelei, Harrison Phillips and Jordan Phillips as well as Jerry Hughes and Shaq Lawson on the end, which could make the 6’6” DE Trent Murphy the forgotten man, leading to a breakout year if he can stay off the trainers table. 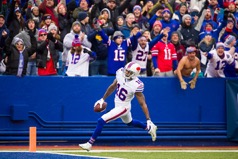 With quarterback, Josh Allen entering his second year in Buffalo, this will be the first time in his career that he will have a full offseason as the teams no-doubt starting quarterback come week one. This allows Allen to build a relationship with his wide-recievers and pick up where he left off during last season with one of his favorite targets, Robert Foster. The 6’2” undrafted reciver from the University of Alabama played in 13 games for Buffalo and finished with 27 receptions and 541 receiving yards which put him second behind Zay Zones on the team. After originally being signed by Buffalo as an undrafted free agent, Foster was cut on October 18th, but then later brought back and put on the active roster on November 10th. He knew he had to prove his worth and he did, as he finished three games with over 100 receiving yards and proved his reliability as he only dropped three passes all season from his 44 targets. His talent is still raw, but with the Buffalo offense having more weapons around Allen, it may prove to be very benefical for Robert Foster. With Zay Jones finally starting to live up to his second round potential, the speedy John Brown and elusive Cole Beasley, the Bills receiving core got a much needed upgrade. This may allow Robert Foster run free more often this season and find himself with one-on-one coverage opportunities where he thrives. With a full offseason with the team and less pressure on him to be the number one receiver, Foster is ready to have a breakout season.

The former 19th overall pick back in 2016 is entering his fourth and final year of his rookie deal after the Bills decided to not pick up his fifth-year option. Lawson has delt with injuries since being drafted, but was scouted to have major talent that would transfer over well in the NFL. That was not completely the case, as he has appeared in 35 games for Buffalo and has amassed just 42 solo tackles (76 combined) and 10.0 sacks. He has not been the All-Pro lineman that the Bills hoped he would be and considering the Bills did not pick up his fifth year option, it quite literally may be his last chance in Buffalo. It is a contract year, so if Lawson can stay healthy, he will most definitely be playing with a chip on his shoulder to earn a big contract next year. Like Murphy, Lawson may benefit from how Ed Oliver plays up the middle, creating more holes and opportuinties for Shaq to get to the backfield quickly.

Coming into last season one of the biggiest question marks with the team was how the wide reciving group would shape up. This training camp is different because the Bills have their quarterback, and they have weapons for Allen to throw to. On November 5th, the Bills claimed McKenzie off of waivers from Denver and was originally used as a kick and punt returner, and later as a wide receiver because of his speed. McKenzie appeared in seven games for Buffalo and scored two rushing touchdowns off of jet-sweeps. He made 18 catches for 179 yards through the air and was a nice surprise for the Bills after having a depleted receiving core.

The question comes from whether or not he will be on the Bills roster come September 1st. He was primarily used as a kick/punt returner to start, but Buffalo brought in Pro-Bowl returner/receiver Andre Roberts as a free agent. Going into training camp, the Bills currently have 12 wide recievers on the roster. More than likely only half of them will make the final cut, so it may be hard for McKenzie to keep his job in Buffalo with the crowded receivers room. He may surprise a lot of people with all the hard work he has been putting in this offseason, but Isaiah McKenzie is definitely someone to watch for if you are headed out to St. John Fisher College for training camp.

The clear choice for most Bills fans and fans around the NFL for best rookie season would be Ed Oliver, and they would be right. I believe Ed Oliver will definitely be in the running for the Defensive Rookie of the Year. All eyes will be on him, but I also think a lot of attention needs to be focused on Dawson Knox. The Bills tight-end position is up in the air right now with their newly acquired TE Tyler Kroft was sidelined 3-4 months with a broken foot. Buffalo is entering training camp with six healthy tight-ends and it seems as though Knox may be at the top of the depth chart with Kroft out. Jason Croom is returning from last season, but he has not showed enough production to be used as the number one TE.

Knox is a very athletic 22 year old out of Ole Miss and the Bills used a third round pick on him. Although many fans may be concerned by his zero touchdowns scored in 2018 in college, they should be thrilled about finding a player with his athleticism that late. He hauled in 15 receptions for 284 yards at Ole Miss in nine games played. The stats that should get Bills fans excited for is his 18.9 average yards per catch, which shows his ability to stretch the field and give Allen a big target down the middle of the field. He ranked among the top five tight-ends in the draft combine and has been handed a great opportunity to succeed in the NFL with a chance to start for the Buffalo Bills. 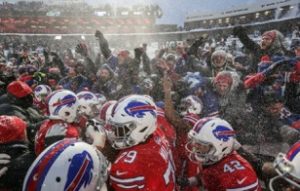 Some other position battles to keep an eye out for is the running-back group. With seven backs on the roster heading into training camp, there is a good chance three or four of them may not be on the roster for week one. There have been rumblings about six-time Pro-Bowler and two-time First-Team All-Pro back LeSean McCoy being traded or released, but I don’t belive Brandon Beane will do that. McCoy is a leader on the team, and still has some talent left at 31 years old. With a new offensive line, McCoy will be ready to take on a heavy work load for the Bills.

On the opposite side of the ball, the second corner-back position is still in question for the Bills. Tre’Davious White  has the number one spot locked down, but Levi Wallace and former first round pick Kevin Johnson will battle it out at training camp and during preseason for that number two spot. But also don’t write off Taron Johnson, as he showed a lot of promise last season when he was healthy. He plays very physical and is a good fit to add in as the slot corner or even be used as the nickel corner. The Bills secondary could be tops in the league if all can stay healthy and the front line gets a lot of pressure on the quarterback.

A lot of question marks still remain and it will be very interesting to watch throughout the rest of the summer, but one thing is for sure, Buffalo Bills fans are desperate to win and many believe this year may be the year for a breakout performance.