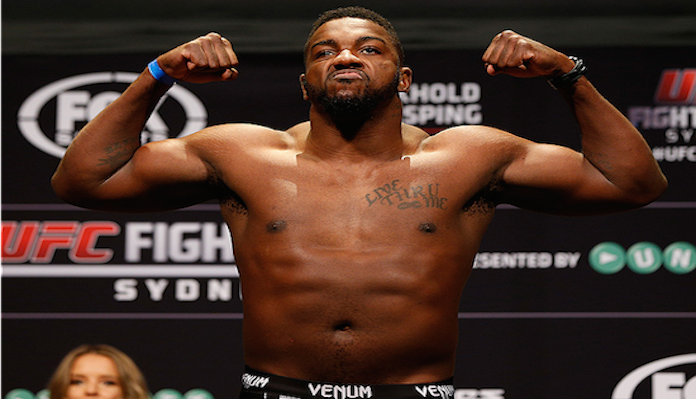 The UFC came to San Antonio and ESPN on Saturday night, albeit slowly. The first 9 fights of the night ended in a decision, setting a new record for the UFC, while the remaining 4 fights picked up the pace. Of all the victors, no one impressed more than #12 Leon “Rocky” Edwards (18-3), who had no trouble taking former Lightweight champ and #4 ranked Welterweight, Rafael dos Anjos (29-12), to an easy decision in the main event. Edwards, who has now won 8 straight, made things difficult for the undersized dos Anjos, showing off great striking and utilizing the clinch to overwhelm RDA. Early in the fight, Edwards gave RDA a nasty cut over his right eye with an elbow, of which he continued to land effectively throughout the night. No doubt the cut affected RDA for the rest of the fight (blood in your eye can be somewhat troublesome).

Edwards used his octagon interview time to call out fellow Welterweight Jorge Masvidal (34-13) for a fight. “There’s a little weasel named Jorge Masvidal. Accept the fight. You’re not on my level.”

Masvidal later responded on Twitter, saying he was promised a title shot after his record setting KO vs Ben Askren earlier this month, and poking fun at Edwards style. “Big difference between putting top ranked opponents to sleep and putting the fans to sleep,” tweeted Masvidal. Edwards has gone the distance in 8 of his last 10 fights.

The two had an exchange following their fights in UFC London back in March, which ended in Masvidal serving Edwards “a three piece with the soda” in the form of punches and a cut under his eye backstage.

Leading up to the main event were 3 first-round knockouts, including a 12-second KO by Walt Harris (13-7) over veteran Aleksei Oleinik (57-13-1) in the Heavyweight co-main event. Harris had Oleinik turned to the side after a flying knee attempt, and landed a clean left to drop him. Oleinik reportedly tore his ACL during the knockdown. The KO for Harris was the third-fastest in the Heavyweight divisions history.

Former NFL player Greg Hardy (5-1) showed once again that he belongs in the UFC, finishing Juan Adams (5-2) in the first minute of their fight. Adams attempted to take Hardy down, who was able to keep top position, and proceeded to land a large number of unanswered strikes to the head. Adams kept his head down the whole time, not changing position or doing anything to defend himself, leaving the referee with no choice but to end it. Adams, oddly enough, protested the decision and was visibly frustrated after the fight ended. The two fighters had been going back and forth on social media leading up to the event, with Adams highlighting Hardy’s checkered past.

Dan “The Hangman” Hooker (18-8) was the first to break the streak of decisions with a highlight first-round KO of James Vick (13-4) in their Lightweight matchup. Hooker used a great feint with his right hand to switch stances, baiting Vick to throw a left, leaving an opening to land a huge left of his own that dropped Vick, before getting stopped on the ground shortly after. This is a big win for Hooker. His win was over a ranked opponent and coming off of a brutal beating from Edson Barboza. As for Vick, he has now dropped 3 in a row, 2 of which were KOs. It may be time for the 6’3” fighter to move up from 155lbs to 170lbs and test his defense against Welterweights.

Hooker and Harris both took home an extra $50,000 in the form of Performance of the Night bonuses. The Fight of the Night went to Mario Bautista (7-1) and Jin Soo Son (9-4). The Bantamweights battled in a high paced back-and-forth scrap, with Bautista coming out on top with the victory.