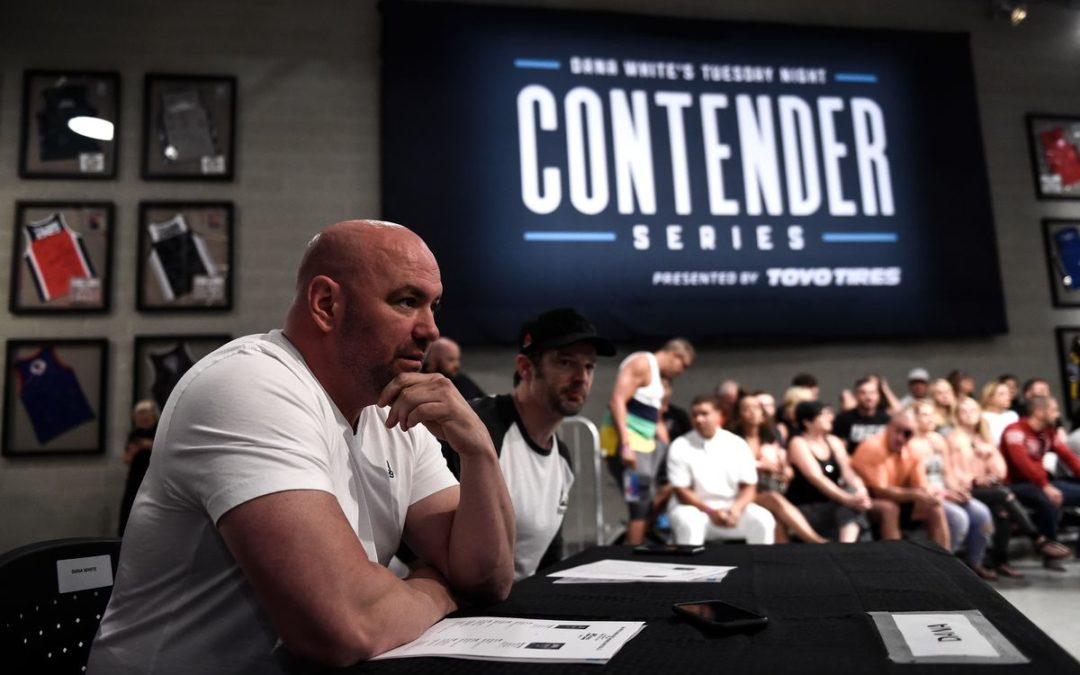 Dana White’s Tuesday Night Contender Series once again had a number of exciting finishes and impressive talent to showcase at the UFC Apex in Las Vegas, Nevada, with 4 fighters earning UFC contracts.

The first contract of the night was given to Middleweight Brendan Allen (12-3), who got the submission victory in the first round after landing a big knee on opponent Aaron Jeffery (6-2).  Allen started out pressuring Jeffery against the cage looking for the takedown, but Jeffery was able to fend off the initial attempts, and started landing punches in the exchanges. Allen wasn’t defending well, so he went for the clinch and was able to land a knee up the middle, dropping Jeffery. Allen used his top game to get good positioning, threatening a triangle and eventually wrapping up the neck with a rear-naked choke, forcing Jeffery to tap, earning the 23-year-old a spot in the UFC.

In the Heavyweight division, Don’Tale Mayes (7-2) earned a contract from Dana White with a big KO win toward the end of the first round over Ricardo Prasel (10-2).  Mayes had been doing a great job of mixing up his striking and pressuring a backpedalling Prasel, mixing in leg kicks and having power behind every punch. Prasel did no more than throw some leg kicks to keep Mayes away, but was dropped against the fence in the final seconds of the first round with a big left hand.  Mayes finished it with follow up strikes on the ground before the ref stopped it. This was a return to the Contender Series for Mayes, no doubt impressing this time out and earning Dana White’s praise.

The Bantamweight showing tonight ended with Ode Osbourne (8-2, 1NC) earning a contract in an impressive all-around showing. Osbourne and opponent Armando Villareal (5-2) came out firing, showing their speed and good forward movement right in the opening seconds. Osbourne was winning the exchanges on the feet, landing a good 1-2 that wobbled Villareal a few minutes in. Villareal later scored a takedown after losing his mouth piece in an exchange, but Osbourne kept busy on his back, constantly moving and looking to turn out of it.  Osbourne was able to swing his legs up and catch Villareal in an armbar, who verbally tapped with less than a minute left in the first round.

Middleweight Antonio Arroyo (9-2) also earned a spot in the octagon in the last fight of the night, coming out strong with some hard kicks to the legs and body of opponent Stephen Regman (9-4). Arroyo dropped Regman with a grazing head kick in the second round, and showed great patience while on top, looking for openings. He eventually found one, submitting Regman with a head and arm choke from the top, and earning a contract in his second appearance in front of Dana White.

The Contender Series is no doubt providing great mid-week content for fight fans, who have now seen 8 finishes in 10 fights over the last two weeks.  The emphasis on the fighters’ stories weigh heavily when watching them fight for UFC contracts, drawing you in and turning you into fans of people you didn’t know existed before the night.

Catch the UFC back on ESPN this Saturday from San Antonio, Texas, headlined by a Welterweight matchup between Rafael dos Anjos (29-11) and Leon Edwards (17-3). RDA, the former Lightweight champion, is coming off of a submission win vs. Welterweight newcomer Kevin Lee (17-5), while Edwards is riding a 7-fight win streak, most recently beating Gunnar Nelson (17-4-1).