Busch Brothers Put on a Last Lap Show at Kentucky 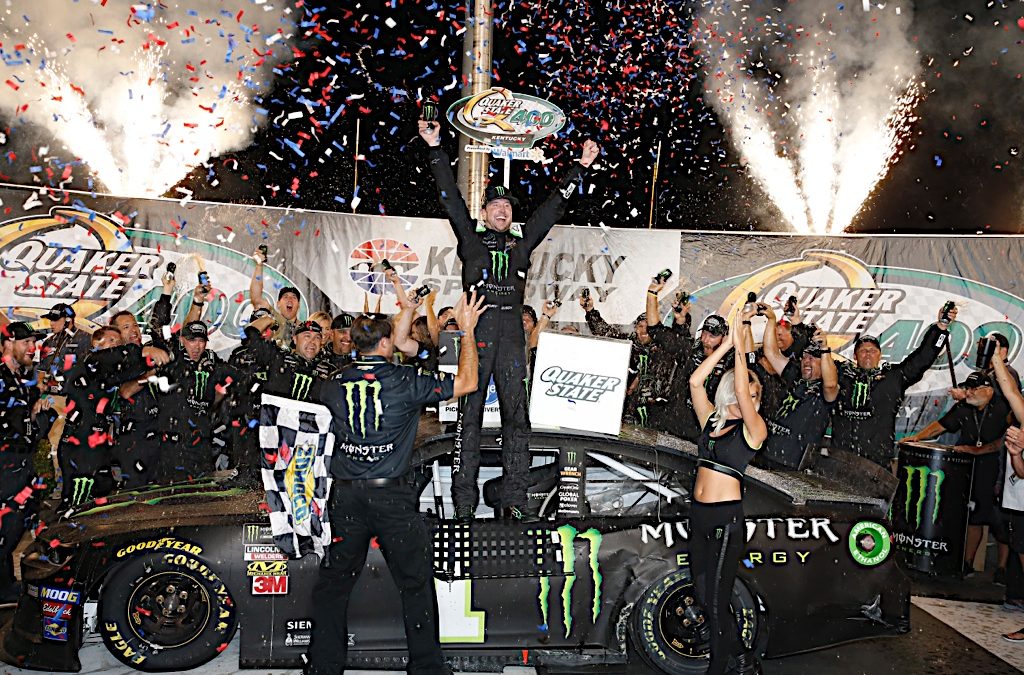 For the last two seasons, it was one driver that won both races and stages at Kentucky Speedway. This time, it was anyone’s race to win at the 1.5 mile track.

Kurt Busch in the 1 Monster Energy Chevrolet Camaro for Chip Ganassi Racing has won the Quaker State 400 at Kentucky Speedway in the Monster Energy NASCAR Cup Series. Kurt Busch would win stage one, lead 41 laps, his first win at Kentucky, first win this season, and his 31st Cup Series victory. His teammate Kyle Larson in the 42 Clover Chevy would not lead a lap, but finished fourth. Busch last week was about to win until the lighting struck giving Justin haley the victory at Daytona.

Team Penske had a decent to disappointing night. The best finish was Joey Logano in the 22 Shell/Pennzoil Ford Mustang who was about to win before the Bubba Wallace spin that caused overtime. Logano would fall back and finish seventh. Ryan Blaney in the 12 DEX Imaging Ford Mustang finished 13th, and Brad Keselowski in the 2 Discount Tire Ford led three laps but finished 20th.

Hendrick Motorsports early on had some of their cars in the top ten, but at the end of the night, they would fall. Chase Elliott in the 9 DEWnited Chevrolet Camaro had a caution early with a right front tire going down on lap 38 and would stay midpack for most of the time after sometimes getting into the top ten. Elliott finished 15th. Alex Bowman in the 88 Nationwide Children’s Hospital Chevy finished 17th and William Byron in the 24 Axalta Chevy finished behind him in 18th due to a restart violation when he passed leader Clint Bowyer before the restart line. The final car was Jimmie Johnson in the 48 Ally Chevy who had a top ten run going until he would hit the wall and spin out on lap 178. Johnson finished 30th.

Three of the four Joe Gibbs Racing Toyota’s finished in the top five. Kyle Busch in the 18 M&M’s Toyota Camry finished second as his brother Kurt edged him out for the win. The younger Busch would win stage two, and lead 72 laps. Erik Jones in the 20 Craftsman Toyota had an important playoff run moving up to 16th in the standings, led one lap, and finished third. Denny Hamlin in the 11 FedEx Freight Toyota led five laps and finished fifth. The only car that finished outside the top five and ten was last years winner Martin Truex Jr in the 19 Auto Owners Toyota who struggled for most of the night finishing 19th.

The next race will be at New Hampshire MotorSpeedway for the Foxwoods Resort Casino 301 where Kevin Harvick looks to repeat and get his first win of the season.