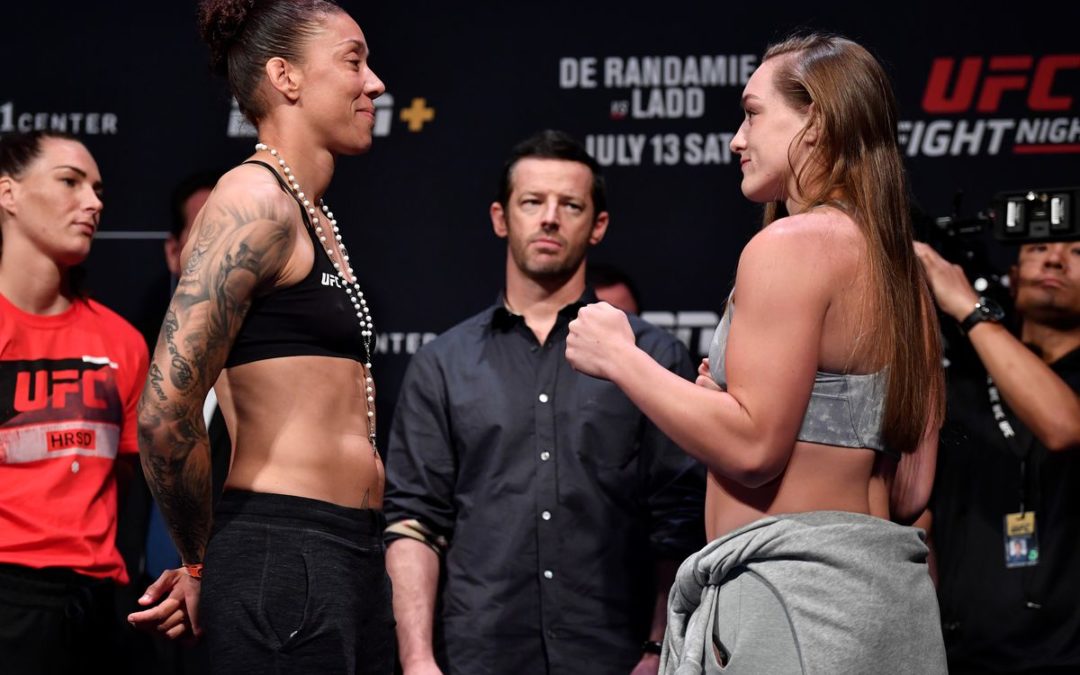 The UFC event in Sacramento tonight provided a very entertaining card despite its lack of on-paper appeal, yet ended in a bit of controversy. Germaine de Randamie (9-3) got the KO win over Aspen Ladd (8-1) in what appeared to be an early stoppage by Herb Dean, 16 seconds into the fight. The #1 ranked Bantamweight dropped Ladd with a clean right hand, and Herb Dean decided to stop the damage there. Ladd immediately protested, and seemed as though she would have postured well on her back, however de Randamie was already being pushed off at that time, and there is no way to tell how it would have ended.

It’s an unfortunate stoppage for Herb, who has put himself in these difficult situations before. It seemed as though GDR would have done more damage to Ladd on the ground, but Ladd also could have postured and defended, given that the ground is her strongest area. However, the fight was stopped, and GDR can now claim a title shot with current Bantamweight and Featherweight champion Amanda Nunes (18-4).

The co-main event also ended with a KO in the first minute of the fight, with the hometown favorite Urijah Faber (35-10) getting the finish early in his Bantamweight return to the octagon over Ricky Simon (15-2). The 40-year old Faber was pressured early, but was able to see an opening for a big overhand right that dropped Simon, allowing the California Kid to get the TKO finish on the ground. Faber clarified his status in his post-fight interview, saying “(T)here’s only one reason I do this, and that’s to test myself against the best in the world.” He also responded to a recent callout by current Flyweight and Bantamweight champion Henry Cejudo (15-2). “I think Henry Cejudo called me out a little bit ago…Henry, what’s up dog?” Cejudo is currently recovering from shoulder surgery, and it is unclear which of his two belts he will defend first.

Preceding Faber’s KO win was fellow Team Alpha Male member Josh Emmett (15-2), also securing a victory via 1st round TKO over Mirsad Bektic (13-2). Emmett dropped Bektic with a strong jab to the chin, and followed up with some vicious ground and pound that earned him the stoppage win. The Featherweight contender now has two KO/TKO wins in a row, and is looking to move up further in the rankings. Bektic now holds both of his career losses vs. members of Team Alpha Male, the first being Darren Elkins in 2017.

Elkins (24-8) also fought tonight, but was not able to join his teammates in the win column, losing a unanimous decision to Ryan Hall (8-1) in the prelims of the card.  Hall, the jiu-jitsu specialist, threatened his signature heel hook with imanari roll attempts all night, causing Elkins to be cautious. Surprisingly, Hall was also very effective with his kicks, dropping Elkins late in the 1st round with a spinning heel kick to the chin. Elkins never seemed to fully recover, getting dropped 3 more times in the fight. It was a very impressive showing for Hall, whose inactivity ended last December with a quick submission of UFC veteran BJ Penn (16-14-2). He hopes to fight again later this year when the octagon returns to hometown area of Washington, DC.

Other highlights of the night include another Team Alpha Male member with a 1st round KO in Andre Fili (20-6). “Touchy” Fili landed a huge counter right hand that dropped fellow Featherweight Sheymon Moraes (11-4), and got the finish by following up with hammer fists on the ground.

Bantamweight Jonathan Martinez (11-2) had a stellar KO of Pingyuan Liu (13-6) with a knee to the chin with just over a minute left in the third round. Liu leaned into the knee and was flattened, while Martinez followed up with a left hand to be sure before the fight was stopped.

Martinez earned himself a Performance of the Night bonus, along with Fili, Emmett, and Faber. All earned an additional $50,000.

The UFC returns next Saturday, July 20th with Rafael dos Anjos and Leon Edwards headlining in a Welterweight matchup in San Antonio on ESPN.