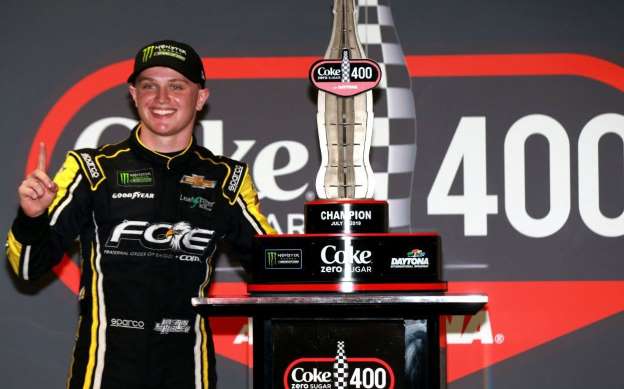 There have been many surprises in NASCAR, but for a new underfunded race team who has different drivers racing every week, this was big to win at the 2.5 mile Daytona International Speedway.

Part time driver Justin Haley in the 77 Fraternal Order of Eagles.com Chevrolet Camaro has won the Coke Zero Sugar 400 at Daytona International Speedway.  Justin Haley was in the mid pack for the most part but would miss the big one on lap 119. Haley would take the lead when some cars pitted, which gave him the lead.  Haley would stay out when Kurt Busch in the 1 Global Poker Military Chevy pitted and would get Spire Motorsports their first ever Monster Energy NASCAR Cup Series win.

Hendrick Motorsports had all four cars in the top 10, but only two would make it out.  William Byron in the 24 Axalta Patriotic Chevrolet Camaro did not lead a lap but was up front, somehow missed the “big one”, and would finish second, while his teammate Jimmie Johnson in the 48 Ally Chevy was just outside of the top ten when the wreck happened.  Johnson did not lead a lap but finished third. The two Hendrick cars who were involved in the accident on lap 119 were Alex Bowman in the 88 Valvoline Patriotic Chevy who finished 21st, and Chase Elliott in the 9 NAPA Batteries Chevy who was leading at one point but was caught up in the wreck.  Elliott led three laps and finished 35th.

Stewart Haas Racing had a tough day.  Daniel Suarez in the 41 Haas Ford Mustang was involved in a wreck early on and would finish 40th, and  Clint Bowyer in the 14 Mobil 1/Rush Truck Centers Ford who made contact with Austin Dillon which caused the big wreck.  Bowyer would lead three laps and finish 34th and is now only four points above the cutline. Another driver involved for Stewart Haas Racing was the 4 Jimmy Johns Ford of Kevin Harvick who led 12 laps and finish 29th.  The only car to finish in the top 10 was Aric Almirola in the 10 Smithfield Anytime Favorites Ford who did not lead a lap and would finish 7th.

Team Penske was also caught up in the incident.  Joey Logano in the 22 Shell/Pennzoil Ford Mustang led 41 laps, won stage one, and finished 25th.  Ryan Blaney in the 12 BodyArmor Ford led a lap and finished 36th, while the final Penske driver Brad Keselowski in the 2 Miller Lite Patriotic Ford  was involved in a wreck on lap 83 and would finish 39th.

Richard Childress Racing Driver Austin Dillon in the 3 American Ethanol Chevrolet Camaro did win stage two and led 46 laps hoping to get the victory and make the playoffs, but was involved in the accident as well.  Teammate Daniel Hemric in the 8 Cessna Chevy was involved in the wreck with Keselowski on lap 83, but came back to finish 18th.

The next race will be the Quaker State 400 at Kentucky Speedway on Saturday in which last years winner Martin Truex Jr looks to repeat.