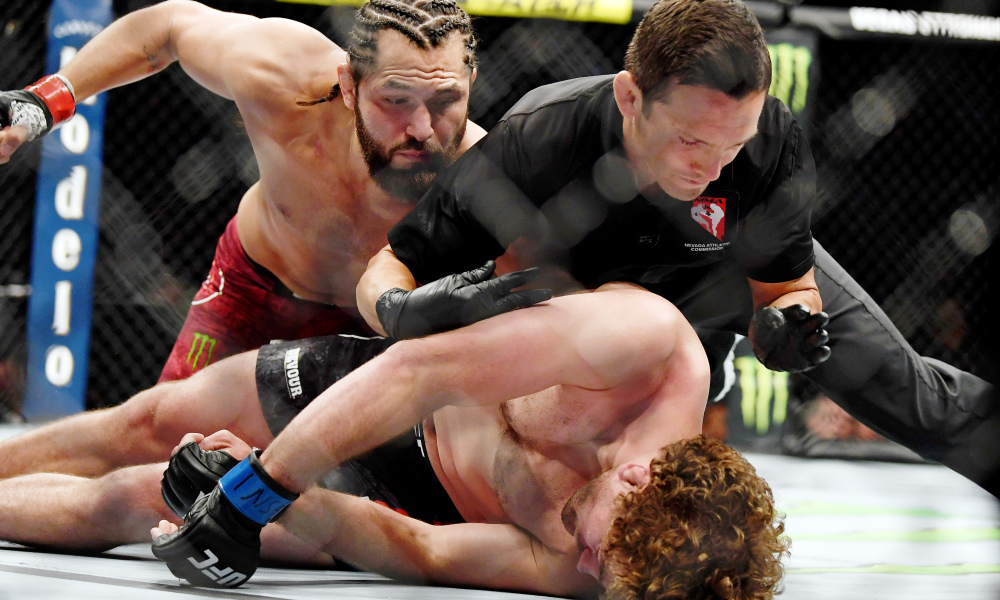 UFC 239 had everything you could ever ask for out of a PPV! To say that the fans got their money’s worth would be a massive understatement. The biggest bang of the night came in what is now officially the fastest knockout in UFC history, with Jorge Masvidal (34-13 MMA) sending Ben Askren (19-1, 1NC MMA) to the canvas stiff as a board with a flying knee in the opening seconds of the fight.  The 5-second KO could have been even earlier had referee Jason Herzog been able to get between the fighters sooner.  Gamebred sprinted in and launched himself right into Askren, who had shot for the takedown with Masvidal coming forward, and followed up on an unconscious Askren with two right hands.  Masvidal took plenty of time to celebrate and mock Askren while he laid there unconscious for a few minutes, no doubt feeling good after all the trash talk between the two leading up to this fight.  Askren did eventually get up, and per reports, was sent to the hospital.

“I really wanted to beat his ass for 14 minutes and 30 seconds, but it didn’t happen,” Masvidal said to Joe Rogan in his post-fight interview. “Whatever. Now back to business. That dude was talkin’ wild, man. I had to show him that there’s consequences sometimes. I’m comin’ for that belt…you guys know who deserves that belt. I’m not the best at cutting promos, but I can fight, man.”

The two main events were action packed as well! Bantamweight champion Amanda Nunes (18-4 MMA) retained her belt by giving Holly Holm (12-5 MMA) a taste of her own medicine, knocking her out with a big head kick in the first round. Nunes was just finding her groove and landed a few right hands on Holly that cause her to hesitate with a leg up and become off-balance. Nunes landed a right head kick that dropped Holm, followed by a flurry of punches before the bout was stopped. Dana White mentioned post-fight that he wants to book Nunes vs Cyborg 2 for the double champ’s next fight.

The main event ended in a split decision victory for the Light Heavyweight champion Jon “Bones” Jones (25-1, 1NC MMA) over a clearly injured Thiago Santos (21-7 MMA). This was the first time in Jones’ career that he lost a card to the judges. Santos buckled his left knee early in the fight, and was constantly losing balance when putting pressure on it throughout the remainder of the bout. While not the most entertaining fight, Jones continued to show his defensive prowess in the octagon, and controlled enough to thwart any potential danger from Santos. However, it was clear that Santos posed a threat to Jones, even with one bad leg. Both fighters had to be helped out of the octagon; Santos for his knee, and Jones for the accumulation of leg kicks on his left leg.

Four Performance of the Night bonuses went out, two of which went to Nunes and Masvidal. Jan Blachowicz (24-8 MMA) earned an extra $50,000 with his 2nd round KO of Luke Rockhold (16-5 MMA), who has now been knocked out in 3 of his last 4 fights, this being his first at Light Heavyweight. This could set up Jan to fight Jones for the belt when both are ready, given Rockhold had been calling for that chance had he won.

The last bonus went to Bantamweight Song Yadong (14-3, 2NC MMA) who knocked out Alejandro Perez (21-8-1 MMA) round one with an impressive overhand right. Yadong improves to 4-0 in the UFC after the win.

Welterweight Michael Chiesa (16-4 MMA) also earned a dominant victory over Diego Sanchez (29-12), winning 30-26 on all three scorecards. Chiesa controlled Sanchez on the ground for the majority of the fight and Sanchez had no answer for his opponent’s overwhelming size and jiu-jitsu. Chiesa is now 2-0 since moving up to 170lbs.

The next event for the UFC will take place next Saturday in Sacramento, headlined by Germaine de Randamie (8-3 MMA) vs. Aspen Ladd (8-0 MMA) in a Bantamweight title eliminator fight. The main card will air at 8pm ET on ESPN+.