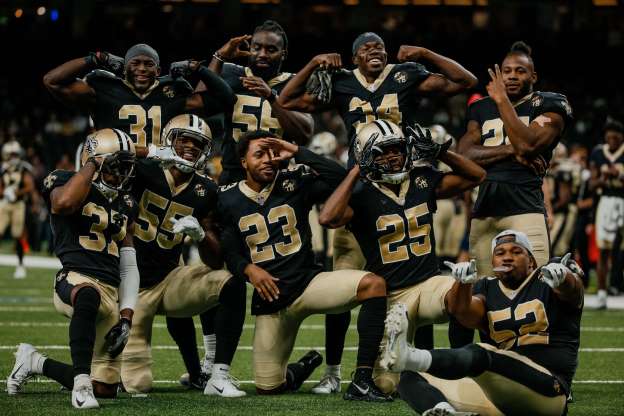 If you look at any playoff team, or any somewhat successful team for that matter, you start to notice the same trend: A franchise Quarterback. The Saints not only have their franchise Quarterback, they have one of the greatest to ever play the position. Having a Hall of Fame caliber Quarterback leading your locker room is something every NFL franchise strives to achieve. Drew Brees is coming off a great season where he finished as the runner-up to Patrick Mahomes in the NFL MVP voting. With newly acquired help, I fully expect Drew to remain in MVP form this season. As long as Drew Brees can play half-decent football, the New Orleans Saints could very much win the NFC South for the third consecutive season.

Flashback to this time two years ago. The NFC South was arguably the best division in the NFL having three teams represent in the playoffs. However, times have most definitely changed. Time finally seemed to catch up to the Carolina Panthers who watched many veterans retire or sign with contenders. Aside from Cam Newton, Christian McCaffrey, and Luke Kuechly, there’s honestly not much to write home about. The Falcons are a talented team, but they can never seem to stay healthy. The Falcons are the only division team that will give the Saints any competition in 2019, if you ask me. The Tampa Bay Buccaneers are, well…the Tampa Bay Buccaneers. I do not expect them to all of a sudden figure out how to knock off a team like the Saints. With that being said, having six very winnable games on the schedule will definitely help New Orleans’ chances of winning a third straight division title.

It’s crazy to comprehend a world where the New Orleans Saints actually having a solid defense, but here we are! Cameron Jordan has anchored down the right side of the defensive line for eight years now and second year Defensive End Marcus Davenport is looking to build off a solid rookie campaign. Sheldon Rankins proved to be a force in the middle of the Defensive Line as well, although he is recovering from a torn Achilles tendon. Demario Davis ended up being one of the best free agent signings the Saints have made in years. New Orleans also has one of the youngest, most talented secondaries in the league consisting of Marshon Lattimore, Patrick Robinson, Eli Apple, Marcus Williams, and Vonn Bell. All in all, the defense has vastly improved and is more than capable of being one of the best in the league this season.

The New Orleans Saints have some of the smartest coaches I have ever seen. The decision making process of Head Coach Sean Payton is risky, but it works and was a huge reason why the Saints were successful in 2018. Sean Payton is a fantastic scout and has a rare ability to unlock players’ full potential in the NFL. Out of nowhere last season, Taysom Hill became must-watch television. Hill played an NFL record 7 different positions in 2018 and according to Sean Payton, he still has a few tricks up his sleeve. Also, the way he uses Safety Vonn Bell is unlike any other. He uses Vonn Bell more as a Linebacker who blitzes from every angle. If you haven’t been watching, it most definitely works! In this year’s draft, the Saints drafted a Linebacker in the seventh round named Kaden Elliss, who I expect to be used a lot like Taysom Hill. Expect him to play some offense as well and be used in a variety of ways. I fully expect the Saints coaching staff to remain aggressive and show off their creativity in 2019.