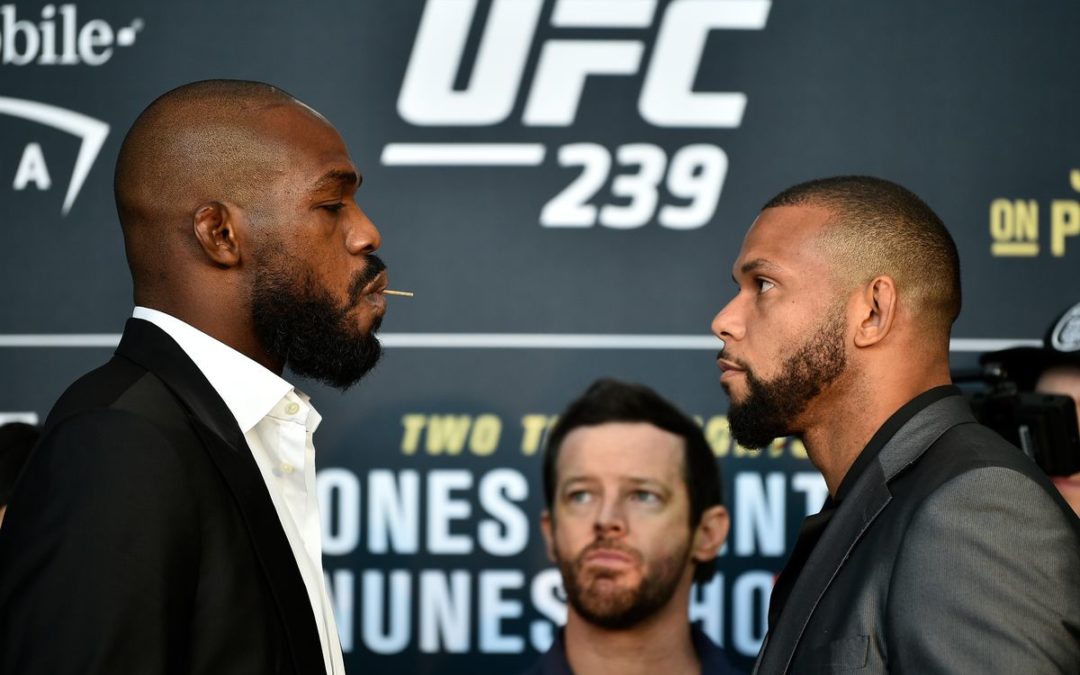 Also gracing the main card are two title contention fights: one in the Welterweight division between Jorge Masvidal (33-13 MMA) and Ben Askren (19-0, 1NC MMA), the other at Light Heavyweight between Jan Blachowicz (23-8 MMA) and former Middleweight Champion and LHW newcomer Luke Rockhold (16-4 MMA).

DraftKings Sportsbook odds as of Thursday, July 4th, have Jones as -715 favorite, the biggest favorite on the card.  Jones has an air of invincibility around him, having never truly lost a fight (the loss on record was a DQ loss vs. Matt Hamill for an illegal 12-6 elbow).  Santos sits at +500, coming in on a three fight winning streak to start his LHW career.  All three of those wins are by KO/TKO

The co-main event also has the champion as a heavy favorite, with Nunes sitting at -400, with contender Holm at +300. Two of three title defenses at BW have ended in a KO/TKO for Nunes, and she’s coming off of a stellar KO of Cris Cyborg (20-2, 1NC MMA) for her FW belt, which no doubt gives her a boost at the oddsmakers table. Holm’s last two fights have been at FW and this will be her first BW in over two years. That fight ended in a KO victory over Bethe Correia (10-4-1 MMA).

In my legal betting time in the state of NJ, I preferred playing the odds and betting on winning methods. We’ve all gotten a reminder from time to time that this is the fight game and ANYTHING can happen. With that said, here are some DraftKings Sportsbook lines that I like for Saturday night:

These are great odds for someone who usually wins by submission. This will be Chiesa’s second fight at WW since moving up from LW; his first being a submission victory over former Interim WW Champion Carlos Condit (30-13 MMA). The ground game is his specialty, and at a more natural fighting weight, the 6’1 submission artist is looking to extend that against a gritty veteran in Sanchez, who beat an easily gassed Mickey Gall (5-2 MMA) his last time out.

Sanchez is no slouch when it comes to the ground, and his aggression can cause Chiesa issues on the feet, but with Sanchez being 40 fights into his career, I don’t expect the 37-year old to have much left in the octagon. Look for Chiesa to clinch to avoid any bulldog striking, and take Sanchez to the ground and work from there.

Masvidal is riding high off of his most recent KO win over former title challenger Darren Till (17-2-1 MMA) this past March in London (and a post-fight scuffle with fellow WW Leon Edwards (17-3 MMA)).  Askren is coming off a controversial submission victory over former WW Champion Robbie Lawler (28-13, 1NC MMA), is +450 to win by submission over Jorge Masvidal.

However, we saw Askren in some early trouble vs. Lawler. He took some big shots and was arguably out for a moment after Lawler slammed him to the ground, and pummeled him with heavy rights. With this being his second fight in the UFC, and given the nature of his first fight, Askren still has something to prove. Unfortunately he has to do it against “Gamebred”, and they have not been friendly since before the fight announcement.  Askren likes to talk, and Masvidal that, so he is taking this a little more personally, promising to “break his face”. I am inclined to believe him, since Ben was not impressive on the feet in his first trip to the octagon.  Masvidal will have to handle the wrestling of Askren, so look for thai kicks and knees when Ben tries for clinching against the fence.

I know, I know.  Jon is arguably the greatest mixed martial artist in history.  No one can deny that he has only ever really been tested in the octagon a handful of times, and recently has looked as invincible as ever.  BUT, Santos may be the most wild and unpredictable fighter Jones has ever faced. I can see a scenario where the power and aggression of Santos can give Jon issues given how his last 3 fights ended in a KO/TKO. When Santos connects, he can put you away.

Whether he is ready for 5 rounds against one of the greatest ever is yet to be determined, but these odds are worth it IMO.  I expect Santos to come out quick and aggressively, trying to get Jon off balance and catch him.  If this is too much of a reach for you, even at these odds, you can look at Jones +400 by decision as well.

Bet safe, enjoy the fights, and hope you make some money!