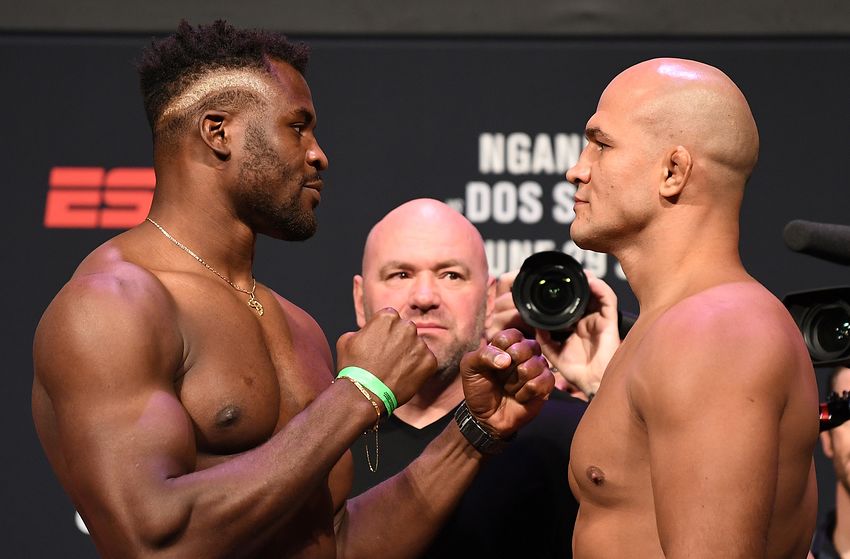 The UFC in Minneapolis on Saturday night provided fanfare and fireworks ahead of the Fourth of July next week, with 8 bouts ending in a finish, and 4 of those in the first round.

The heavyweight headliner ended in that fashion, with #2 Francis Ngannou (14-3 MMA) knocking out #3 Junior Dos Santos (21-6 MMA) in 1:11 of the first round.  Both fighters began the fight throwing leg kicks, with Ngannou actually stumbling from a kick from JDS, but then the hands started flying. Eventually Junior loaded up a right hand that Ngannou avoided, and followed up with two of his own to drop the former UFC Heavyweight champ, before finishing it on the ground.

Francis now rides a 3-fight win streak (Curtis Blaydes, Cain Velasquez, JDS) and sets up a match between him and the winner of the current champ Daniel Cormier (22-1 MMA) and former champ Stipe Miocic (18-3 MMA), the latter which holds a win over him stemming from UFC 220 on Jan. 8, 2018. Those two will face off with their championship rematch at UFC 241 on August 17th later this year.

“I think the only thing left now is the winner of Stipe and DC,” Ngannou said in the octagon post-fight.  “I want the title shot back…I need some respect, now. I deserve it.”

The co-main event also had title shot implications, with the top two ranked Flyweights facing off for a second time.  #2 Joseph Benavidez (28-5 MMA) once again finished #1 Jussier Formiga, this time in the second round. Benavidez was cut near the left eye in the first round on a right hand from Formiga that seemed to bother him, but the cutman in his corner did a good enough job where it wasn’t noticeable in the second.  After continuing to land some front-leg calf kicks, Benavidez landed a head kick with less than 30 seconds in the second round, followed by a right hand that hurt Formiga, and piled on for the finish.

Benavidez, who also holds a win over current Flyweight and Bantamweight Champ (and 2008 Olympic Gold Medalist in Wrestling) Henry Cejudo (15-2 MMA), called for his shot in the octagon after his win.

“(Cejudo)’s calling out a lot of fights that don’t make sense. He knows I’m the hardest one out there…that’s the fight to make. I’ll be waiting…come back down, let’s go.”  Cejudo will be out for the remainder of the year to recover from needed shoulder surgery after moving up to fight Marlon Moraes (22-6-1) to win the Bantamweight belt earlier this month.

Performance of the Night bonuses went to both Ngannou and Benavidez for their stoppage victories, as well as Light Heavyweights Eryk Anders (12-4 MMA) and Alonzo Menifield (9-0 MMA).  Anders stopped a 3-fight losing streak with some big left hands to put away Vinicius Moreira (9-3 MMA) in the first round, while Menifield took advantage of a sloppy spinning back kick by Paul “The Bearjew” Craig (11-4 MMA) by landing a couple powerful right hands, also knocking him out in the first.

The event will be available on ESPN+ via PPV.