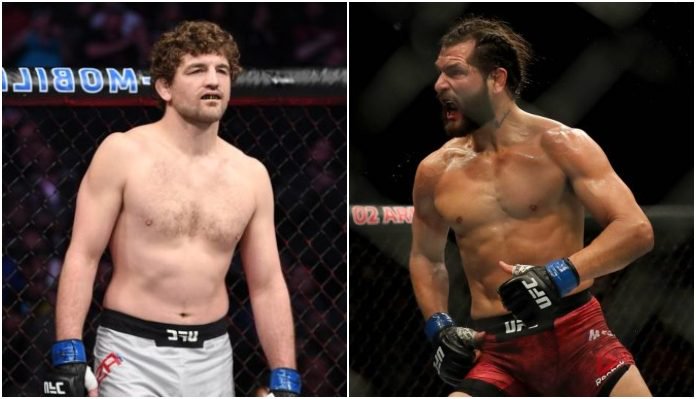 This fight will take place July 6th , 2019 at the T-Mobile Arena in Las Vegas, Nevada.

There is no love lost between these two fighters. Both have expressed disdain for each other through social media platforms such as twitter and instagram furthering this simmering rivalry. And both are coming back after huge wins. Masvidal knocked out #3 Darren Till (14-2-1) in round 2 of their fight at UFC fight night London, on march 16th 2019. And Askren beat former Welterweight Champion (#6) Robbie Lawler (27-11-0) via bulldog choke in round 1 of Askren’s UFC 235 debut  on march 2nd 2019. Both fighters confidence levels are very high which should lead to a gruelling technical fight and a contender for fight of the night bonus wins. The latest vegas odds are wide on this one with Ben Askren at -200 and Jorge Masvidal at +150.

(#5) Ben Askren (19-0-1) utilizes “funkstyle” wrestling which essentially is using techniques that work against strengths. This has won him Welterweight Gold in both Bellator and ONE FC. Askren can wear his opponent down, grinding them with takedown after takedown and has a noted strength when he has control in top position. He’s durable and showed toughness weathering the first flurry and slam from Robbie Lawler and was able to secure a bulldog choke in a controversial stoppage by Herb Dean late in the 1st round.

Askren will have to push the pace. Going in early, securing takedown attempts and wearing down Masvidal. He has never been attributed to being a good striker and has shown big holes in that  aspect of his fighting ability. This will constitute a problem if he is forced into that situation by the veteran UFC fighter who has great striking and takedown defense. Askren will need to keep Masvidal out of center control and keep those exchanges to a minimum and keep to his fundamentals. This would be the ideal scenario for Ben Askren if he’s to win his 2nd Ufc fight.

(#4) Jorge Masvidal (33-13) has been around for a long time. Originally started fighting backyard brawls in Kimbo Slice’s Youtube videos. But has elevated himself to be an elite UFC fighter. Notable wins are against Yves Edwards, K.J Noons, Ross Pearson, Jake Ellenberger, Donald Cerrone, and Darren Till. he is a veteran in every sense of the word. His takedown defense (77%) is higher rated than even Lawler and he has the tools to keep it on the feet. This makes him a more difficult matchup for Askren. He has to stuff the takedowns and quell the pressure that Askren will bring. He needs to punish each attempt with strikes as he has great punching power and a high fight IQ. Fighting out of American Top Team and training with wrestlers like Colby Covington and Yoel Romero have sharpened his grappling game considerably. This will give a level of competitiveness to Ben Askren in the grappling game. And if he can maintain control in the fight it will put Askren at a disadvantage and possibly  give momentum to Masvidal to hand undefeated Ben Askren his 1st MMA career loss. This win would put Masvidal in the title conversation.

This is not an easy fight to call, both fighters are great at what they do. After watching their fights and taking percentages i will say that i feel Masvidal will win by stoppage , this could happen early if Ben Askren can’t take the initial flurries Masvidal will certainly open up with. But i feel Masvidal will stuff the takedowns and will punish Askren each time he attempts. This could make Askren wear down from strikes and soften him up for a possible k’o.  Masvidal wins by TKO in round 3.