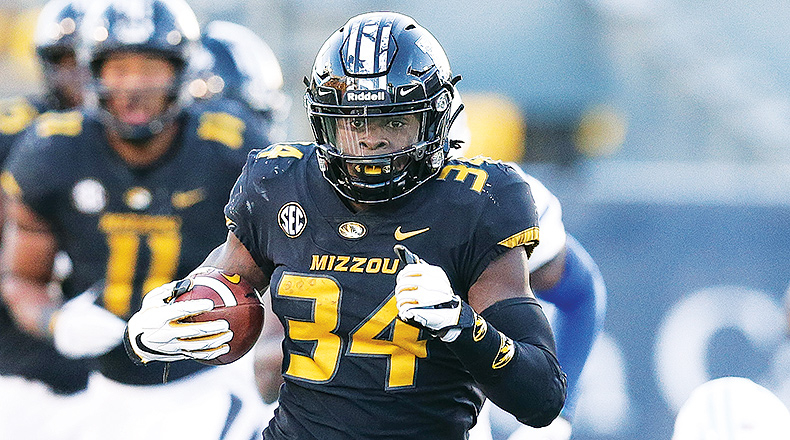 Once the ball starts rolling, it is quite difficult to stop. In the beginning, we were planning on doing one team analysis per week until the season opener. The excitement of college football is too tough to slow down and we are ready with another analysis. We started with the Baylor Bears and Minnesota Golden Gophers, and this week we will look at the controversial Missouri Tigers.

A YEAR OF CONTROVERSY

Back in 2015, Missouri football had become a talking point across the country. The University had recently been involved in a number of important protests caused by a growing concern of racial injustice. That year, there had been a number of racially charged incidents that had taken place on campus. Sports Illustrated wrote an excellent piece at the time to highlight the when and how each of these incidents occurred.

The protests caught the attention of many Americans, but it wasn’t until the football team decided to publicly join the cause that things started to change. Two days after Missouri football announced that they were suspending all football operations, the President of the University and the chancellor resigned from their positions.

Unfortunately, one of the repercussions of the boycott was a 21 percent drop in attendance since 2014. This has had an impact on the football side of things, eating into the home field advantage Missouri once held.

After the collapse of the team in 2015, Head Coach Barry Odom was brought in to help turn things around. Odom had played for Missouri when he was in university. He categorized himself as a “player’s coach” who knew what it took to win Tiger football. His first season was tough with a 4-8 record, but since then he has been on a significant upswing. He brought Missouri bowling in the following two seasons and was recently ranked in the top ten of SEC coaches by Athlon Sports.

Odom was able to put together a prolific offense under four-year starting quarterback and current Denver Bronco, Drew Lock. When Lock was drafted into the NFL there were concerns over what this offense could do without him. Those concerns vanished with the arrival of former Clemson starting QB Kelly Bryant. Bryant is a tremendous talent and is elusive when outside of the pocket. He brought Clemson to the College Football Playoff in his first year as a starter and brings explosiveness with both his arm and legs. Odom was a big part of Bryants decision to join Missouri. He had this to say about the fourth year coach:

Coach Odom is a guy that just cares. He genuinely just cares about his players and that’s the first thing that hit home for me. Just seeing a coach go out of his way to make sure his players are good, it makes me feel at home and makes me want to play for a guy like that.

The Tigers success was once again hurt by controversy within their school. With the lasting impact of the 2015 protests starting to subside, Missouri was handed a number of sanctions by the NCAA. Apparently, investigations had found that there was a tutor in the school who had been cheating and completing courses for athletes. According to the NCAA report, the former tutor completed an entire course for one football player. The tutor also assisted two football student-athletes completion of Missouri’s math placement exam, violating the NCAA’s ethical conduct and benefits bylaws.

The sanctions placed on the football program are considered to be incredibly exaggerated by not only Missouri fans but college football fans across the nation. In addition to a postseason ban, the Tigers’ football program must also vacate records in which those football players participated while ineligible. The university will also have its scholarships reduced by five percent for the 2019-2020 academic year.

When the sanctions were announced, Missouri football fans united for the first time since 2015 to protest the decision. They launched a statewide Make it Right campaign and appealed the decision. The fan base seems to be fired up for the 2019 season and might give Missouri the push they need to succeed in 2019. They will likely not be eligible for the playoffs but could be looking at their first nine-win season since 2014.

We all know that the SEC is a powerhouse of a conference. On the East you have Georgia leading the pack and on the West Alabama. However, like most teams in the SEC, Missouri has an easy schedule. They will likely be favored in all but two of their games this year and will not face a tough opponent until week four. Their toughest stretch will be weeks nine and ten against Georgia and Florida.

They ranked ninth in offensive efficiency last season, and much of that offense is returning. Behind Bryant will be superstar runningback Larry Rountree, who rushed for 1216 yards as a sophomore. The defense last season allowed just 3.7 yards per carry to opposing running backs and have seven veterans returning.

We do not even know if Missouri will be eligible for an SEC East title this season. Nevertheless, with the team Odom has put together and a resurging fanbase the sky is the limit. I can see Bryant leading the way for Missouri to become a darkhorse contender in the SEC East. It is hard not to imagine at least nine to ten wins this year.