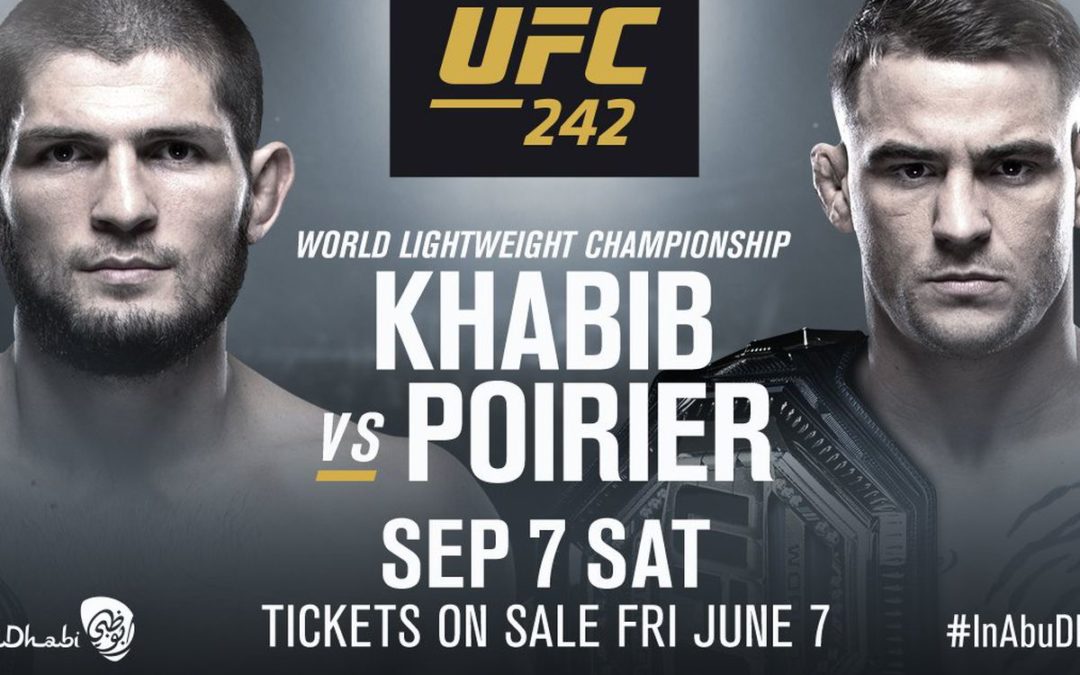 UFC 242 Main event will match-up undefeated Champion 27-0 Khabib “The Eagle” Nurmagomedov against  #1 contender and Interim Champion 25-5 Dustin “The Diamond” Poirier for the undisputed UFC Light-Weight Championship. This highly anticipated match will be held at “The Arena” , Yari Island.  Abu Dhabi, UAE. We will get to see how Khabib handles a complete MMA fighter, probably for the first time in his career. And although this isn’t a match between Khabib and McGregor, or Khabib and Ferguson it will nevertheless be an exciting match-up between two of the light-weight divisions best. And two of the fighters on the current P4P list #4 Khabib and #8 Poirier.

Most will say that striking will be more in favor of Poirier with his knees , jabs and elbows in the clinch. And Khabib has shown holes in his stand up game , but showed signs of improvement when he fought McGregor. Even catching McGregor with a viscous over hand right that put one of the best strikers in the game on the canvas. However, Poirier has dispatched some of the best strikers in the light-weight division such as Pettis, Alvaerez, Gaetjhe and recently Max Holloway. In terms of completeness in the stand up aspect this part is where poirier will outshine Khabib and could give Poirier a chance to finish the fight.  Advantage: Poirier

While Poirier has a 69% takedown defense, Khabib’s takedowns and pressure are the best in the light-weight division and his switches during takedowns are not just the double or single leg, if defended he’s already working 2 or 3 moves ahead. So these transitions are hard to defend. Thus eventually he wears you down and secures the takedown. Now if Poirier can defend these he therefore opens opportunities for strikes and knees in the clinch which have a lot of power behind them. This could win rounds or at best win the fight. The edge goes to Khabib in grappling assuming he maintains a dominant position. Advantage: Khabib

Khabib and Poirier have substantial submissions. Both have sub wins with kimuras. Poirier can submit from his back with a pretty slick triangle and Khabib has secured some D’arce choke wins. If Khabib has Poirier on his back he has those vicious elbows and a wicked kimura plus that pressure has stuffed many of the best in the division. Poirier has more submission wins than Khabib and i feel is more well versed in that, and has proven that he has the ability to submit a good wrestler from his back. But if Khabib has top position id give this to Khabib for brutal pressure and a hardcore kimura. But in total submission power and capabilities this is in Poiriers favor. Advantage: Poirier

Khabib needs to cut off the cage. Keeping Poirier with his back to the fence will allow him to apply his relentless pressure which no one has been able to answer yet. Johnson who was able to knock out Poirier stood no chance against that mauling and was visibly shaken for that entire fight. Making the cage smaller will make it difficult for Poirier to reset and open up further exchanges on the feet with him. Khabib has shown that he has the ability for this against other top strikers in the division. He needs to keep the pressure hard upon Poirier and wear him down, however resilient Poirier is he needs to keep top position and continue to work him possibly securing a kimura or d’arce.

Poirier said at the press conference that he was going to “ take him to places he hasn’t been before” Meaning he will try to mix it up with takedown attempts. This is a realm that Khabib isn’t used to in competition. And it will make Khabib have to watch for more than just strikes and attempts to regain footing to reset on the feet. This could potentially unbalance Khabib and force him into waters that isn’t his bread and butter. As seen in the fight against Iaquinta, Khabib struggled at first until he was able to secure top position. It will also force Khabib into exchanges on the feet that will favor Poirier. If he can do what Gustaffson did to Jon Jones by surprising him by takedowns then it could very well be Poirier that has his hand lifted at the end of the fight.

I will say I feel Poirier will be taken down fast in the first and early in the opening rounds. I just don’t see him doing significant damage to Khabib. In the latter championship rounds Khabib will turn up the pressure to a worn down Poirier. He won’t have the gas to get back to his feet and will not be in a position to work submissions from his back. Khabib will have him on his back and the ref will be forced to stop the fight due to strikes and elbows. As resilient as Poirier has shown to be i don’t feel he’s got the gas tank to outlast that pressure and will succumb to fatigue and strikes.