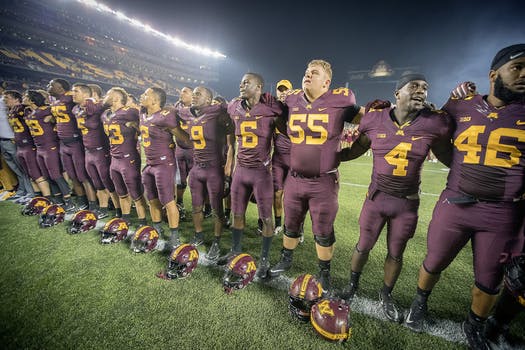 Last week we kicked off our weekly spotlight feature with the Baylor Bears and their potential outcome during the 2019 season. This week we will look at the ridiculously named Golden Gophers of Minnesota, and why I believe they have a legitimate shot of the Big Ten title this year.

It is hard to argue that Fleck hasn’t put together a solid foundation to this Minnesota team. He has nine returning offensive starters and will have experience at the quarterback position. During spring practice it was hard to tell who out of Zack Annexstad and Tanner Morgan would win the QB battle for the Gophers. They are both strong at the position but for different reasons. Annexstad is a better arm talent, but Morgan can produce more with his legs. If I had to guess at this point, I believe that Morgan will come out as the starter this season. He makes the offense more efficient; the Gophers ranked 69th in offensive efficiency last year.

Adding to a good tandem at QB, Minnesota might just have the best running back group in the Big Ten, potentially in the entire nation. RB Mo Ibrahim rushed for 1,160 yards and nine touchdowns last year. Rodney Williams and Shannon Brooks are both expected to be healthy this year, and they are quite the 1-2 punch. The Gophers also have Bryce Williams who rushed for over 500 yards last year. Opposing defenses will have no choice but to stack the box against this potent RB core, leaving Morgan with possibly the best wide receiver in the Big Ten, Tyler Johnson. Johnson broke school records last year with 1,169 yards and 12 touchdowns. As I said, Fleck definitely has the foundation.

It is not all rainbows and metaphors for the Golden Gophers, 2018 also showed us that the foundation is not as stable as Fleck would like. Minnesota had one of the worst defenses in the Big Ten causing them to part ways with defensive coordinator Robb Smith after a blowout 55-31 loss to Illinois. This year, they brought in Joe Rossi to replace Smith but lost quite a bit of talent in linebacker Blake Cashman and safety Jacob Huff.

They only have seven returning defensive position players returning, meaning that this defense is chock-full of young talent. It is going to be an uphill battle for Rossi to bring these guys together; hopefully, the experience on the offensive side of the ball can trickle down.

Minnesota will be carrying in some momentum from the end of the 2018 season. They started to turn things around at the end of the year beating Purdue, Wisconsin and Georgia Tech in their bowl game. They lost to a ranked Northwestern team during that stretch but held them to only 24 points.

This season they will have a more manageable crossover schedule with the Big Ten East playing lightweights Rutgers and Maryland. Penn State will surely be a challenge, but it is a winnable game. It is hard to argue that the Big Ten West will not be a more competitive division this season with most teams showing significant improvements.

At the end of the day, the Gophers have improved on both sides of the ball. They will have a deadly ground attack combined with an explosive, elusive QB. In conference, games will be crucial in the Big Ten West if Minnesota hopes to play for a conference championship. I think it will be between Minnesota and Nebraska, but the Golden Gophers will edge out the Cornhuskers for a chance to win it all.