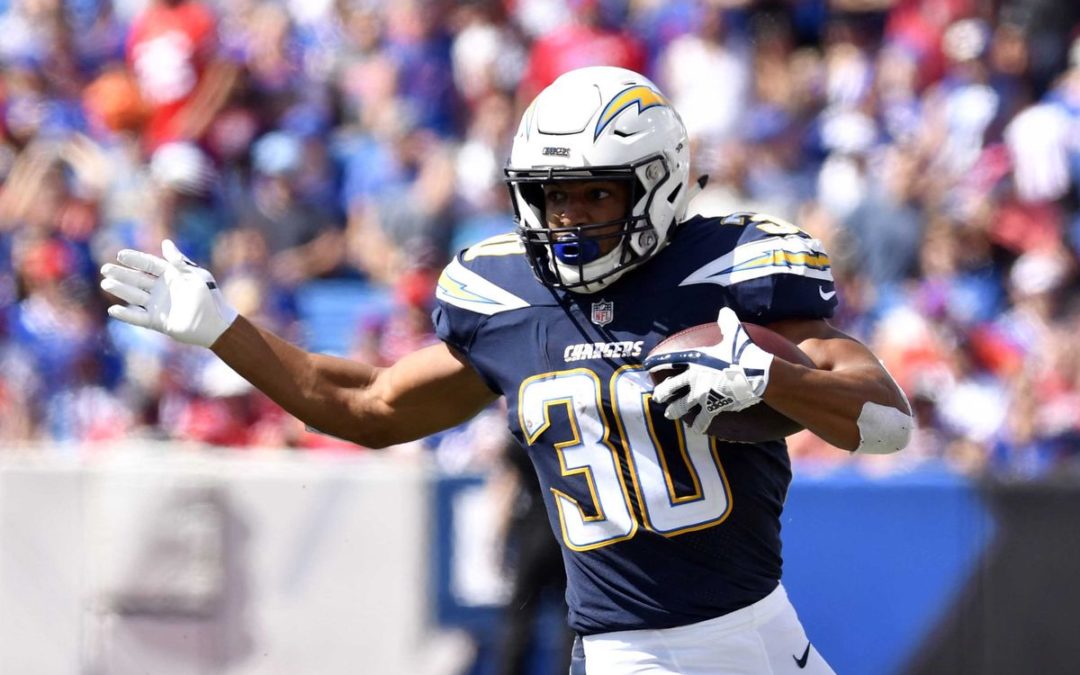 There is and will never be only one way to win your fantasy league, for every year it seems as if there is a new strategy that arises as the new way to win your league. No matter what strategy you use ALL fantasy leagues start on draft day, and to me this is the most important component in setting yourself up for success for the season.

When you think of the running back position you think of the big dogs like Saquon Barkley, Alvin Kamara, Christian McCaffery, and Ezekiel Elliot, but in order to come out the draft on top of the other teams you have to be able to identify value picks in the middle rounds that will help you gain the edge right out of the gate. These are some of the “forgotten” running backs that provide insane value in redraft leagues for the 2019 season.

One of the most elusive scat backs in the game is gaining more and more value in fantasy drafts, and that is since his ADP is continuing to drop. Ekeler was able to finish as RB25 last year in full point PPR and is currently being drafted as RB42 in full point PPR drafts. The extremely low ADP I think arises from the doubts that Ekeler will be able to sustain the same work load that he had last season, but his workload is easily reachable regardless if Melvin Gordon is healthy or not. 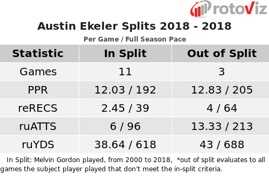 Obviously Ekeler is the backup to Melvin Gordon and by no means is that going to change, but that did not stop this very elusive back from producing great fantasy weeks for his owners. As you can see with the splits above Ekeler was just as efficient when Gordon played versus when he did not. The only thing that a tremendous jump in value was the number of rushing attempts which obviously did not change his points per game by that much. Another thing going in Ekelers favor is the injury history associated with Melvin Gordon which allows Ekeler to take some work week in and week out as Gordon does not have the durability to be the workhorse.  I fully expect Austin Ekeler to repeat what he did last year and he is going for a tremendous value as I mentioned where you can draft him at the RB40 spot.

No one would ever think that a top 12 running back last season would be on this list, but due to the Bears drafting David Montgomery it is perceived that Cohen is going to the be the second option in this back field, but obviously since I have Cohen on this list I do not believe that. Cohen was by no means the main back in terms of carries as Jordan Howard, now on the Eagles, had 250 total carries along with 1.69 targets per game. Cohen thrived in the passing game as he had 70.3% of the teams running back receptions averaging 5.56 targets per game. In the fantasy football world today, it seems already “decided” that Montgomery is going to be the lead back and take over this backfield and to me that is complete bias with no stats to back it up. Montgomery WILL be the main rusher in this offense, but even if Montgomery does take ALL 250 carries that Howard had last year Cohen will still sustain the same volume that led to a RB11 finish. It seems as if people have closed the door on hope that Cohen repeats what he did last year, but I believe that Nagy will slowly work Montgomery into Howard’s previous role which will clear the path for Cohen to receive solid work, and not to mention Cohen is being drafted as the RB28 at the end of the 5th round.

Just like Cohen, this top 12 running back has been shoved aside when it comes to fantasy drafts this off-season. White finished as the RB7 in full point PPR last year and is being drafted one running back ahead of Cohen as the RB27. This Patriots backfield is crowded, but it always has been, and it always seems as if James White is one of the favorites when it comes to Tom Brady’s check down passes. Last season, White had a crazy 139 targets and 71.9% of the team’s running back receptions. With the new addition of Damien Harris, I think his targets may go down a little bit, but White only caught 76% of his passes so there is only room for improvement in terms of passes caught. 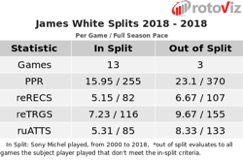 Shown above is the splits of games with Sony Michel, who is in line to be the lead back, and games without Sony Michel. It doesn’t take much to see that White played very well without Sony Michel but if you look at his numbers with Michel you can see that he was still able to produce solid numbers that every owner could be confident in having in their lineup every week. Yes, there will be some regression for James White, but for a back that put up 1.52 fantasy points per touch White will still provide value even IF there is slight regression. James White is going to be a tremendous value in redraft leagues for the 2019 season.