The Pacers and D’Angelo Russell 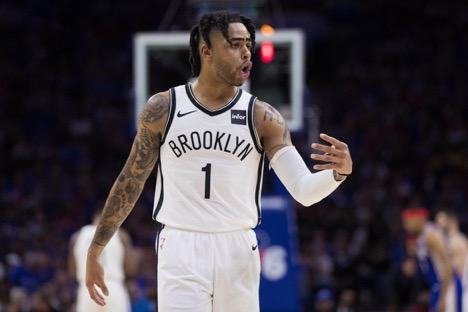 The Pacers are in-line to have one of their biggest off-seasons in recent team history, and there is one big name free agent that could end up signing with the blue and gold, Point Guard D’Angelo Russell. With the 6th most cap space in the NBA, according to Spotrac.com, the time is now for the Pacers to go after a young, talented Point Guard.

A rewind to how the Pacers could land Russell first. Reports are out that the Nets have wanted to sign Kyrie Irving this off-season, and after the Nets traded Allen Crabbe it is clear, the Nets are all in this free agency.

Irving is a native of New Jersey and as had rumors swirling that he could sign with either the Brooklyn Nets or the New York Knicks. In an article written by Steve Bulpett of the Boston Herald, a sources with ties to Roc Nation says, the organization expected to become Irving’s new representative, “the All-Star point guard is prepared to sign with the Brooklyn Nets when he becomes a free agent next month.”

On June 12th, Irving parted ways with his long-time agent Jeff Wechsler, and has now signed with ROC Nation Sports. The agency, who has ties to the Brooklyn Nets, gives for more reasoning that Irving will sign with the Nets.

ROC Nation Sports also has ties to another big name free agent, Kevin Durant. Both Irving and Durant have expressed interest in playing together before, and with the Nets trading Crabbe, they now have the cap space to sign both Durant and Irving to the max contract.

Where does this leave Russell?  With both Irving and Russell being ball-dominate Point Guards, Russell’s usage rate last year was 31.9 and Irving’s was 29.6, both Guards simply can’t play together with them both being so ball-dominate.

Go back to the two max contracts. If the Nets were to sign Irving, while pursuing and possibly landing another player that takes up that max contract, the Nets would not have the cap space to re-sign or match any offer another team gives Russell, thus allowing Russell to sign with another team.

Ian Bagley, a Knicks and Nets reporter/writer for SNY recently reported that if the Nets sign Irving they’re “highly” unlikely to re-sign Russell. Bagley also reported that members of the Pacers are “high” on Russell going into free agency.

Now, how does this all affect the Pacers? Going into this off-season The Pacers have the 6th-most cap space in the NBA, according to spotrac.com. They have roughly 46 million dollars to spend, unless they go over the “soft cap”, which the NBA uses.

The Pacers have a few in-house free agents this off-season, including, Bojan Bogdanovic, Thaddeus Young, Darren Collison, Cory Joseph, and Wesley Matthews. With the Pacers needing to get younger at the Point Guard position, they are in a prime spot to pursue a young, talented Point Guard like Russell.

Shams Charania of The Athletic and Stadium reported that the Pacers are one of few teams interested in Russell this summer. Other teams include, the Minnesota Timberwolves, Orlando Magic, and Utah Jazz. For any of those teams, excluding the Pacers, wanting to land Russell they must make a few trades to clear cap space to offer him the max contract. The Pacers on the other hand, can offer Russell the max right at the beginning of free agency, which starts at 6pm EST, June 30th.

This is where the Nets can be boxed in. If the Pacers come in right at the start of free agency and offer Russell the max contract the Nets will have two days to “match” the offer sheet with Russell being a restricted free agent. If the Nets want to land two super star free agents and use the two max spots that means they cannot bring back Russell. They could also sign Irving, and if they do that Russell is all-but-gone at that situation.

Going over the cap situation, the NBA works under a soft salary cap, meaning there is a salary cap ($109 million, according to Spotrac) but there are a variety of exceptions that allow teams to exceed that cap.

In addition to the soft cap, the NBA utilizes a luxury tax system that is applied if the team payroll exceeds that 109 million dollars. These teams pay a penalty for each dollar their team salary exceeds the tax level. This year’s luxury tax threshold is set at $132 million, according to Spotrac. Here is the table for dollar amounts when a team exceeds the cap.

In simpler terms, the Pacers have $46 million dollars to spend if they don’t want to go over the salary cap.

When signing free agents money is always the main factor to why a player signs, or doesn’t sign, with a team. The Pacers have the most cap space out of all the teams vying for Russell, unless trades are made. According to Brian Lewis of the New York Post, Russell is wanting a max contract from either the Nets, or from any team that wants to sign the 23-year old All-Star Point Guard.

The max contract, if Russell signs with the Pacers would be, four years with $117.2 million dollars tied into the All-Star Point Guard. That contract would pay him around $27 million dollars per year.

With the Pacers having $46 million dollars to play with, if they signed Russell to the max they would be left with roughly $19 million dollars to spend. With that money they could go and bring-back one of their in-house free agents, like Bojan Bogdanovic.

A good contract the Pacers could offer the 30-year old Small Forward would be around three years, and around $45 million dollars, putting his cap hit to $15 million per year. Bogdanovic posted on his Instagram back in early-June of him, Russell and former teammate Joe Harris hanging out in the off-season. Could the signing of Russell lure Bogdanovic back to Indiana for slightly cheaper than his market value?

Bogdanovic expressed his interest in wanting to stay in Indiana after two terrific seasons playing for the Pacers. He mentioned he loves the city and loves playing for the Pacers. One issue with trying to bring back Bogdanovic is there have been reports that the Spurs have interest in and will try to clear cap space to sign him. That might drive Bogdanovic’s market price up, but if he really loves playing in Indiana, and is enticed by playing with Russell he will take less money to stay in Indiana.

In 2021 Indianapolis will be the home of the All-Star break. All the NBA stars could out for a weekend and enjoy time with their family and friends. The All-Star weekend festivities last from Friday to Sunday night featuring a few contests like the 3-point shootout and the Dunk Contest. 2017 New Orleans hosted the All-Star break, the city generated $44.9 million dollars during that weekend. When Indianpolis holds the All-Star Weekend festivities they could expect over $50 million dollars in revenue. This sets the Pacers up to go a little over the cap this off-season to get Russell, re-sign Young, Bogdanovic, and bring in another player on the NBA’s “mid-level exception” contract.

Signing Russell in free agency, could land another solid role player for the Pacers. If they wanted to use their mid-level exception contract on a veteran it would only cost them $4.75 million dollars against the cap. Players they could bring in are Trevor Ariza, Wilson Chandler, or Thabo Sefolosha, to provide quality bench depth.

This off-season is all aligned for the Pacers to make a splash, and make that next jump needed to get into title contention while they’re young. Now the question is, “Will Simon and Pritchard pull the trigger?”