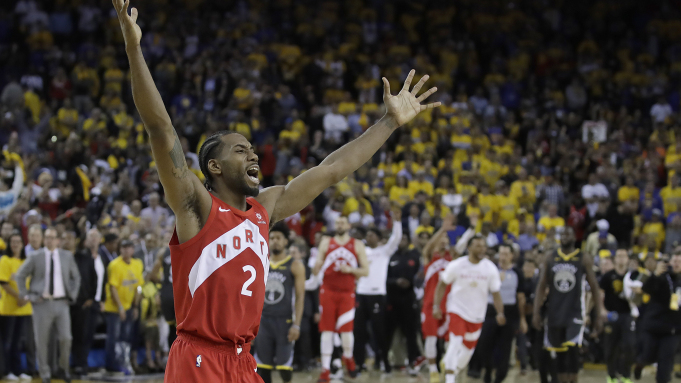 How goes it sports fans? I don’t know about you all but I’m still recuperating from last week’s festivities! SO much happened from crowning the new NBA champions of 2019, some recording breaking news, and even some bad. There’s a lot to get to so let’s start shall we with the best news of all! (Also shout out to Charlotte, North Carolina where I’m writing this. You all have the perfect summer weather! Okay for real now let’s start.)

Firstly, hats off to the Toronto Raptors for getting the dub Thursday night and becoming the 2019 NBA Champions! Even with the Warriors dealing with three injured players in Kevin Durant, Klay Thompson, and Kevin Looney, they put up a tough fight against the Raptors, especially in game 6. The game was close for the most part, and it was unfortunate that Klay Thompson further injured his left knee (it was confirmed that he tore his ACL) during a dunk that was successfully blocked by the Raptors’ Danny Green. The team from the 6ix ended winning game 6 with a total score of 114-110, with 26 of those points lead by the Raptors’ point guard: Kyle Lowry, and the Finals MVP going to none other than small forward, Kawhi Leonard.

Majority of the game consisted of intense shooting and good defense displayed by both teams…but during the last minutes of the game, Warriors’ Draymond Green made a last second decision at 0.9 seconds left in the game to call timeout. When Warriors’ point guard, Steph Curry missed a 3-pointer, the rebound bounced to half court and Draymond Green dove for the ball and called a timeout when there were no timeouts left for the team which resulted in a technical foul. This action was not only hilarious to many watching, but it was beneficial in keeping the Warriors’ hopes alive, even though Kawhi Leonard was able to shoot 2 free throws and the Raptors got the inbound. In the end, it just wasn’t enough, and history was made as the Toronto Raptors became the first and only team outside the United States to win the NBA championship.

MLB: A Bounty for Big Papi

Growing up watching baseball, former Boston Red Sox player: David “Big Papi” Ortiz was my absolute favorite player. So naturally I was saddened to hear that Ortiz was shot in the back last Sunday in a nightclub in his native Dominican Republic. Thankfully he is recovering and in stable condition, but the real question is why did he get shot in the first place? Well the latest news has confirmed there as one gunman and eight other suspects in the attempted murder of Ortiz, with one more suspect the police are searching for. Earlier news reported the shooting of Ortiz was due to an affair he had with the girlfriend of a jealous drug lord, which would explain why reports are surfacing about the gunman was offered $7800 to shoot the former baseball player. Currently, Ortiz is recovering in the ICU unit at Massachusetts General Hospital, and his wife Tiffany confirms he is making good progress. My prayers go up for Big Papi.

A big congratulations goes out to the St. Louis Blues for becoming the 2018-2019 Stanley Cup Champions! The Missouri team beat a tough Boston Bruins team in game 7 of the Stanley Cup Finals last Wednesday with a total score of 4-1, and man where those players ever aggressive! I’m sure I’m not the only one who agrees that the Blues played exceptionally well, and there was one goal that had me out of my seat cheering in the third period. With 12 minutes left in the period, Vladimir Tarasenko of the St. Louis made a smooth pass to his teammate, center of the Blues: Brayden Schenn who scored the third goal for his team in one of the slickest one-timers I have seen to date! That goal pretty much secured the game for the St. Louis Blues as they were leading 3-0 at the time of the goal. History was made that night, as this is St. Louis’ first Stanley Cup win and before this year, they haven’t made it to the Stanley Cup Finals since 1970! Drink it in Missouri, you are this year’s Stanley Cup Champions!

MMA: A Battle of Royalty

There was no UFC this weekend but I’m sure MMA fans were still entertained, with all that was going on with Bellator 222, which took place at Madison Square Garden, in New York! This was arguably the most stacked fight card in Bellator history, and the fights did not disappoint last Friday, especially the main card! The first fight on the main card consisted of RIZIN Bantamweight Champion: Kyoji Horiguchi taking on the Bellator Bantamweight Champ: Darrion Caldwell. This five-round championship bout was close with Caldwell using his wrestling to take the first few rounds but then Horiguchi came back in the later rounds with his striking. In the end of five rounds, the judges gave Horiguchi the decision win and he is now the NEW Bellator Bantamweight Champion! Although Horiguchi wanted a more action-packed fight, he is elated with the victory, and many MMA fans are now calling him the best bantamweight fighter in MMA!

Speaking of one of the best, Madison Square Garden was blessed to have two of MMA’s greatest middleweights: Chael Sonnen and Lyoto Machida face off in the co-main event! Sonnen was consistently looking for the takedown in both the first and second rounds, in which Machida defended successfully and made Sonnen work. Sonnen survived the first flying knee from his opponent in the first round, but when Machida timed another flying knee perfectly in the second round during another one of Sonnen’s take down attempts, it sent his opponent to the canvas of the octagon. Machida followed it up with flurry of shots before the referee had to call this one quits for Sonnen. Not only did Machida win by technical knockout and advances to the winner of Ryan Bader vs the middleweight champ: Gegard Mousasi, Chael Sonnen decided to hang up his gloves and go into early retirement! The 42-year old veteran said he had a lot of fun and lived out his five-fight contract, so now he is walking out from the sport of MMA. I have much respect for Chael Sonnen and I wish him good luck in his future endeavors.

The main event of Bellator 222 was a fight between royalty: Neiman Gracie of the world-reknown Gracie family, and the Welterweight Champion: Rory “The Red King” Macdonald. To be honest, I was surprised at Neiman Gracie’s performance as I felt as if he could have been more aggressive during the remainder of the fight, because he did push forward a lot in the first round against Macdonald.  Gracie’s numerous submission attempts were successfully by the welterweight champ, who established a dominant ground game and very good striking used to punished Gracie. After a grueling five-round battle, the judges gave Rory Macdonald the decision win. The Welterweight Champ couldn’t be happier about how the fight went, and he was also excited that he got the win in the mecca of arenas: Madison Square Garden. Notable mentions from the Bellator card also go to bantamweight: Patrick Mix with the impressive debut win against Ricky Bandejas. ‘Patchy’ Mix used his grappling to get behind Bandejas and climbed his back with ease getting the rear-naked choke in the first minute of the first round!

Wow that was a lot of moments to mention for last week! Thanks for reading and feel free to leave a comment. Tune in next week for more Monique’s Moments!