UFC 238: A Weekend to Remember 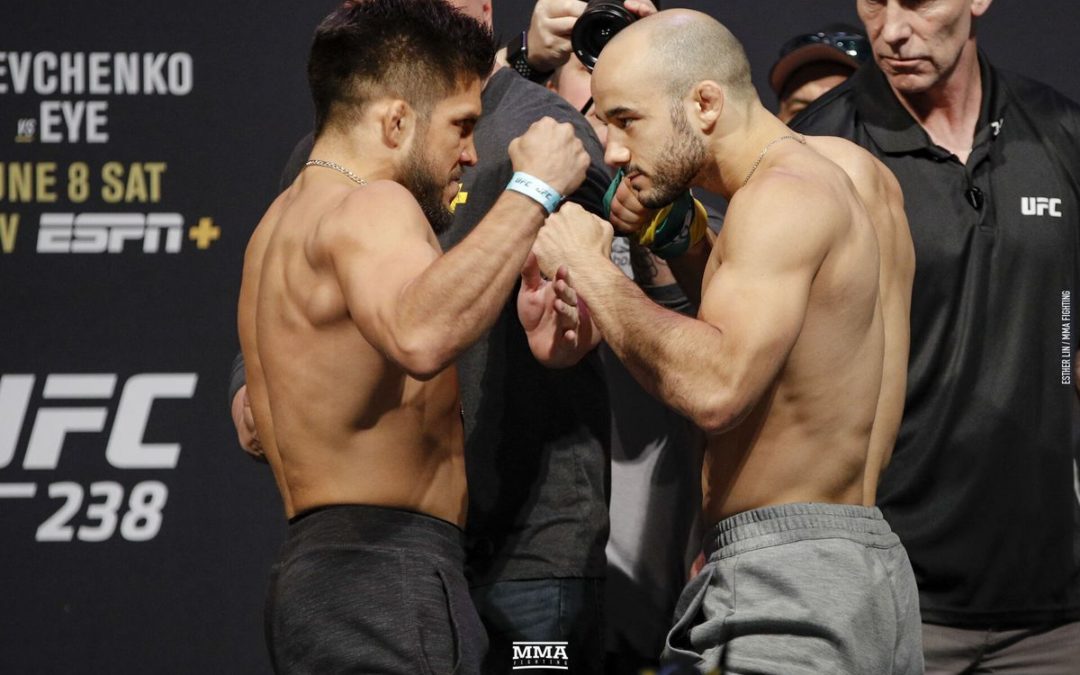 I have had the honor and privilege of attending eight UFC events since 2008. The one that just transpired, UFC 238, has to be my absolute favorite. I had been looking forward to this event for months, and it’s a weekend that I will most certainly never forget for a very long time.

My weekend began on Friday afternoon with the weigh-ins at the United Center. Joe Rogan was in rare form on the microphone, and everyone made weight. The small, but enthusiastic crowd, enjoyed every minute. Afterward was when the real fun began, which made the experience even more memorable.

A few weeks ago, prominent and well-respected MMA journalist Ariel Helwani announced on his radio show that he would be hosting a live show in Chicago the day before UFC 238. When I first heard the news, I was absolutely astounded. Out of all the places he could have picked to host his first-ever live show, he chose Chicago. Within a few days, tickets were sold out, and I was lucky enough to be able to attend.

The show began a little after 8 PM, with the doors opening just before 7 o’clock. There were plenty of people who came to the event, maybe around 500 or so. I thought the show itself is very unique. Helwani decided to bring five of the best fighters in the world with him to host his first-ever “roadshow.” This included the likes of Eddie Alvarez, Stephen Thompson, Stipe Miocic, Ben Askren, and Paul Felder. The main highlight of the show was an MMA-based trivia game.

With fan participation, fighters competed in three rounds of trivia. Each fighter received one lifeline per round. If they were unsure of the question being asked, they could pick a fan from the audience to assist them with the answer. Luckily enough, I was picked by Paul Felder to answer a trivia question about UFC trilogies.

Thankfully, I got the answer correct. The prize that a fan received for getting the correct answer was a plaque, signed by all of the fighters. It is one of the coolest gifts I have ever earned in my life. Stipe Miocic narrowly won the championship, meaning that he will have bragging rights for the next 12 months.

After the trivia game ended, Helwani stayed for a question-and-answer section. Everything about the New York Knicks to the WWE was discussed. Finally, he invited everyone to the bar area for a meet-and-greet, as well as pictures. It was truly an honor to meet one of my idols, as he is someone I have followed for almost 10 years now. It is amazing to see how far he has come, as he is now one of the most reliable and loyal MMA journalists today. By the time I got home. I simply could not sleep. I was super excited for the day ahead.

When fight day approached, I could not contain myself. I had been waiting for weeks for June 8, and I was super excited for the day ahead.

Before every major UFC pay-per-view, there is something called a Fan Experience where the UFC brings together six or seven of the best fighters and up and comers that they have to offer. Some notable names included Chris Weidman, Maycee Barber, Curtis Blaydes, Stephen Thompson, Corey Anderson, Clay Guida and more.

Each fighter was super enjoyable to meet. While they may be super intense in the octagon, they are some of the nicest and most humble individuals a fan could ever come across. What made it even better was that I had heard of every single one, since I follow the sport very closely.

I will admit that it was a long day, and that I missed some of the preliminary fights, but I had a great time once I entered the United Center just before 7 PM. The crowd started to fill up just before the pay-per-view began.

The event lived up to expectations. Donald Cerrone had his eye swollen up just before the third round against Tony Ferguson, forcing the doctor to stop the fight to prevent any further damage. Valentina Shevchenko delivered a Mirko Cro-Cop style head-kick that left Jessica Eye on the canvas for several minutes before being helped up by the referee and her corner.

Shevchenko is now in a tough spot, as many people believe there are very few formidable opponents for her at 125 pounds. It will be interesting to see what the UFC decides to do from here.

Henry Cejudo made necessary adjustments just before the second round to come back and eventually finish slight favorite Marlon Moraes midway through the third round via TKO. Cejudo becomes the third champ-champ in UFC history, as he now holds the flyweight and bantemweight titles. The possibilities are now endless, as he called out three fighters during his post-fight interview.

Overall, the event was everything I expected it to be. In my humble opinion, there has never been a better time to be an MMA fan. Every single event that I have tuned into during this calendar year has been nothing short of amazing. I cannot wait for the next two events, which take place on June 29 in Greenville, South Carolina, and July 6 which takes place in Las Vegas.

I have not decided if I will attend next year’s event, but every single UFC I have ever attended in my life so far has been an experience all its own. I look forward to attending every year for as long as I can.