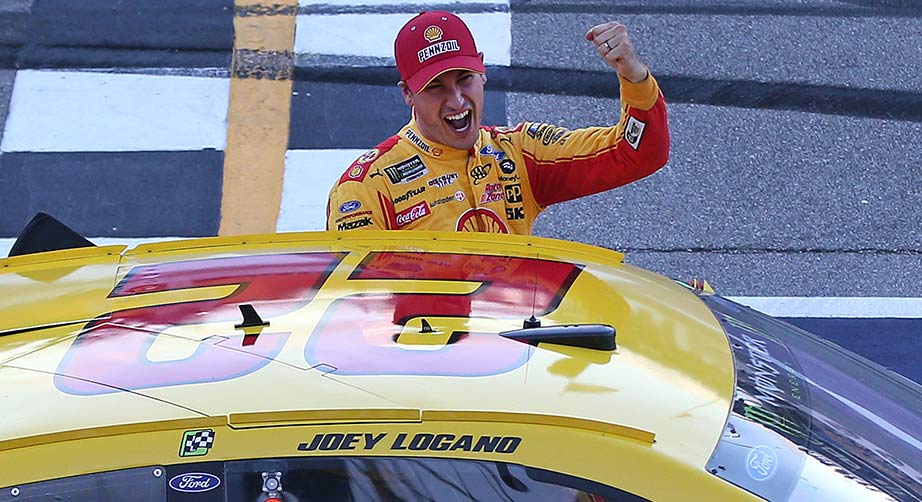 BROOKLYN, MI:  Mother Nature would not let the cup race on Sunday due to rain, but Monday it was time to go.  For this driver, he won the pole on Friday and dominated the race throughout the day. This defending champion would get his second win of the season.

Joey Logano has won the FireKeepers Casino 400 in the 22 Shell/Pennzoil Ford Mustang GT for Team Penske.  This is Joey Logano’s second win of the season, his third win at Michigan while starting on the pole each of the three times as well, and his 23rd career victory in the Monster Energy NASCAR Cup Series.  Logano would also lead 163 out of 200 laps in this race and would win stage one.

Both of Logano’s teammates finished in the top 10 as well.  Brad Keselowski in the 2 Miller Lite Ford Mustang led six laps and finished sixth while teammate Ryan Blaney in the 12 Wrangler Riggs/Menards Ford led a lap and finished ninth.

Joe Gibbs racing has two of their cars in the top ten.  Martin Truex Jr in the 19 Auto-Owners Insurance Toyota Camry would not lead a lap, but would still come home finishing third, while teammate Kyle Busch in the 18 Hazelnut Spread M&M’s Toyota finished fifth.  The only two cars that did not finish in the top ten were Denny Hamlin in the 11 FedEx Freight Toyota who finished 11th leading five laps, and Erik Jones in the 20 Craftsman/Sports Clips Haircuts Toyota who hit the wall with four laps to go.  Jones finished 31st.

Stewart Haas Racing had an up and down day during the race.  Daniel Suarez in the 41 Haas Demo Day Ford Mustang would lead one lap and finish fourth, and his teammate Kevin Harvick in the 4 Busch Light Ford, led 15 laps and would finish seventh.  The two cars who finished outside the top 10 were Aric Almirola in the 10 Smithfield Ford who finished 17th and Clint Bowyer in the 14 Haas/IT Savvy Ford who finished 35th after making contact with Erik Jones.

Chip Ganassi Racing two cars finished in the top 15, with one of them finishing second.  Kurt Busch in the 1 Monster Energy Chevrolet Camaro was so close yet again to getting that first win of the season, but would not have the power to catch Logano.  Kyle Larson in the 42 would have an up and down day. Larson finished 14th.

The Monster Energy NASCAR Cup Series will head to Sonoma Raceway for the Toyota/Save Mart350 which will not only be the final race of the season for Fox until next year, but also, broadcaster and NASCAR Hall of Famer Darrell Waltrip’s last time being in the booth.  The race will start at 3:00pm on Fox Sports 1.