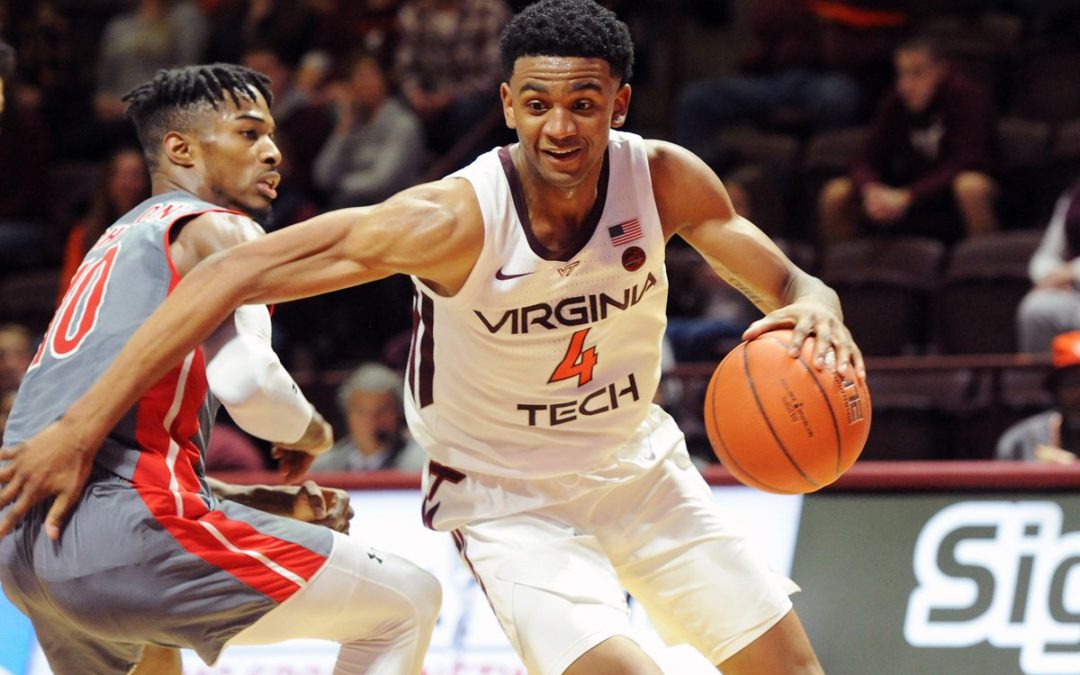 The NBA Draft is just over a week away, so it’s time to fire up the mock drafts and player comparisons just like every year. Tankathon.com will have all a person needs to know on the draft order, player reviews and the ability to compare prosepcts.

After finishing the regular season 48-32, the Pacers own the 18th overall pick in the first round, as of right now. General Manager Kevin Pritchard mentioned that the Pacers could do a lot of different things with that pick, trade up, trade down, or trade the pick completely.

In 2017 the Pacers brought in UCLA teammates T.J. Leaf, and Ike Anigbogu which they ended up drafting both players. The following year in 2018 the Pacers brought in Alize Johnson out of Arizona State, and drafted him. They didn’t have a pre-draft workout with their first round pick Aaron Holiday.

A lot can happen in the next week for the Pacers as they gear up for a very important off-season. For the sake of this article, the Pacers will keep their first round pick and are on the clock, here are some potential draft prospects the Pacers could draft if they’re still on the board at 18.

A two-year starter at Virginia Tech, Nickeil Alexander-Walker is a very intriguing combo guard that the Pacers could target when they’re on the clock.

Alexander-Walker is a 6’5” 205-pound Point Guard, and he is long, at 6’5″ with a 6’9″ wingspan. He is a lean, and a long-limbed combo guard who sees the game as a point guard, but can be used at either guard position.

A major strength to his game include being an elite defensive player. With his 6’9” wingspan as a point guard he is able to get into passing lanes and deflect passes coming his way. In the 2018-2019 season Alexander-Walker averaged two steals per game, had a 94.6 defensive rating and had a .086 defensive win share which were both tops in the nation.

One area that needs work on is his turnovers, last season he had three per game. Alexander-Walker can run an offense and shoot the ball well but he can at times turn the ball over, which is what is keeping him from being a top-15 talent.

A pro comparison to Alexander-Walker would be Dejounte Murray of the San Antonio Spurs. Both players are long point guards that can run an offense and score on their own as well. They are also exceptional defenders even with how slim they both are.

The Pacers have lacked length and size at the Point Guard spot for a long time, since George Hill was in town, going with Alexander-Walker would give the Pacers a very long, very good defensive backcourt with him and Victor Oladipo.

Tyler Herro is another combo-guard that could slide to the Pacers at pick 18. The 6’6 Shooting Guard is a very viable option for the Pacers if they want to go with more of a shooter than a true “Point” guard to man their backcourt with Oladipo.

Anyone that watched college basketball last year saw this kid and know exactly what he brings, shooting. But Herro can bring more than just shooting to the Pacers if they chose to draft the kid from blue blood school Kentucky.

Yes, Herro’s main strength is shooting but he is also a very good ball-handler. In Kentucky’s tournament run Herro was used as the point guard a vast majority of the time, initiating offense, and getting other people open to score. Herro only averaged 2.7 assists per game at Kentucky because he was mostly used to shoot and score, but he has shown he can run an offense if need be.

Another weakness of Herro’s game is his defense. Herro is a willing defender but his slower foot speed and lack of length will limit him to how many players he can guard at the NBA level. He also lacks lower body strength.

Herro and Nik Stauskas are very similar in their games. Both are really good shooters but lack the quickness, foot speed, and length to be good defenders at the NBA level. One slight difference between the two is Herro is a better ball-handler and can run the point guard role better than Stauskas.

The Pacers lack three-point shooting in their back court, especially last year after Oladipo went down for the season. Herro can come in and provide good shooting to the Pacers backcourt and provide versatility in their lineups with his ability to play both guard positions. Herro should be a prospect the Pacers look to draft.

Cameron Johnson is a 6’8” 205-pound wing that can also play the “Stretch Four” role. Out of North Carolina University, Johnson was arguably the Tar Heels’ best shooter, and a player you never wanted to leave open anywhere on the court.

Johnson spent his first three years of college at the University of Pittsburgh. An injury his freshman season had him medically redshirt and after his junior year he graduated with a degree in communications. He would then transfer to North Carolina for his final two years of eligibility.

The obvious strength to Johnson is his amazing outside shooting. But, what gets lost in his lights-out shooting is he’s very efficient when taking shots. His efficient three-point shooting was around 62 percent last year, and he shot 40 percent in projected three-point percentage which takes into factor of college threes and free throws.

Johnson isn’t the biggest wing player, which could hurt him at the NBA level when guarding bigger wings. He is currently 205 pounds which isn’t very big, in the NBA he will have to play at around 230 to 240 pounds to be able to play both the small forward position and the “Stretch Four” role for a team.

Watching Johnson a person would see a lot of Kyle Korver in him. Both Johnson and Korver are incredible three-point shooters and it is evident that it is their specialty. Outside of the three-point shooting neither are very bad in any other areas, but don’t excel in them either.

If the Pacers want to shoot more threes next year, and don’t want to break the bank to bring back Bojan Bogandovic then they should look at Johnson. He can be the consistent outside threat, whether off the bench or starting, the Pacers will need next year to have better spacing in their offense.

Any Indiana basketball fan knows who this prospect is, Romeo Langford, Mr. Basketball in the state of Indiana in 2018 is entering the draft after one year at Indiana University.

The 6’6” 200-pound two guard out of New Albany, Indiana could slip to the Pacers at 18, and that pick would purely be a “talent over need” pick for the Pacers. Langford is a top-15 prospect that struggled in the latter portion of the season last year with Indiana, and most was due to injuries.

At Indiana Langford was the leading scorer, averaging 16 points per game for the Hoosiers, while adding 5 rebounds, and 2 assists per game. Langford did struggle shooting-wise in college, only shooting around 27 percent from three, which is a part of his game he needs to improve on. He did get to the free throw line a lot last year, near 50 percent.

At the NBA Combine Langford measured in at 6’6”, a 6’11” wingspan, with nine inch hands. Both of those marks would’ve ranked top-5 in last year’s class of Guards. A wrist and back injury kept Langford out of participating in any on-court drills or 5-on-5’s but he is expected to be back full healthy for the regular season.

Langford is very young, he will only be 19 when he’s drafted and won’t be 20 until the start of the regular season. At his size, he is very skilled at getting to the rim and either finishing, or getting fouled. As previously stated, he got to the free throw line 50 percent last year, which puts a lot of players in foul trouble.

The obvious area for improvement is his shooting. In high school and college he averaged 27 percent from three, teams will sag off him at the NBA level. Not just his three point shooting, but just all around shooting must improve for Langford. He only had a 52 percent true shooting percentage and a 49 percent effective field goal percentage, very much a volume shooter.

Langford’s game is a lot like fellow Hoosier, Victor Oladipo. Both players came out of college as very good slashers, but very bad shooters. They both have exceptional length and can play both the point guard and the shooting guard role. Oladipo was a much more willing and better defender than Langford was at Indiana, but that can all change at the NBA level.

If Langford somehow falls to the Pacers at pick 18, they should take him. Aside from the injuries and lack of shooting, Langford can come in right away and contribute either off the bench or as a starter next to Oladipo next season. Not often does a top-15 talent fall in the draft to 18, and if that happened to the Pacers they should consider Langford with their first round pick.

An unknown draft prospect in the eyes of man Pacers fans, but Luka Šamanić is a player Pacers fans should watch for.

Šamanić is a 6’11” 227-pound Power Forward, who could also play Center if need be. An overseas prospect, Šamanić, is only 19 years old and won’t be 20 until next year so draft age isn’t a concern. He struggled in 2017-2018 due to lack of playing time for Union Olimpija, who plays in the LEB Gold, which is a second division league in Spain. Then again, he played for Barcelona last year, who according to Nets Daily, had a negative reputation of not playing their prospects if they had any chances to get to the NBA.

So far, Šamanić has played significantly better this season, he is now getting reasonable amount of playing time and is finally playing in an organization that is actively trying to develop his skills. He’s shown an improvement in his scoring efficiency and rebounding for Union Olimpija.

Pacers fans should take interest in this player because he got a private pre-draft workout a couple weeks back, while the rest of the prospects were a part of groups that came to Indiana.

Šamanić is a skilled big man that could project into being a versatile scoring player that can rebound and block shots. Highly skilled with the ball, he has good handles and nice court vision for a big man, can also create his own shot. All in all, Šamanić is a very good all-around scorer and can provide a good scoring punch to the Pacers’ front court.

He does fall in-love with the three point shot too often. His lack of size will have him struggle to guard NBA big men, and he shies away from contact in the paint at times. Not a lot of flaws, Šamanić is a very well-balanced offensive and defensive player.

Seeing his game, it’s a lot like David Lee with extended range, Lee wasn’t much of a three-point shooter while Šamanić can hit from there consistently. Also has similarities to Dario Saric on how both can score from inside, mid-range, and three.

With the Pacers losing Thaddeus Young to free agency, there is an open spot to the starting Power Forward position. Šamanić could come in and bring a scoring punch and three point shot that the Pacers could use from a front court player. Not many people know about Šamanić, but fans should start to look into the 6’11” big man from Croatia.