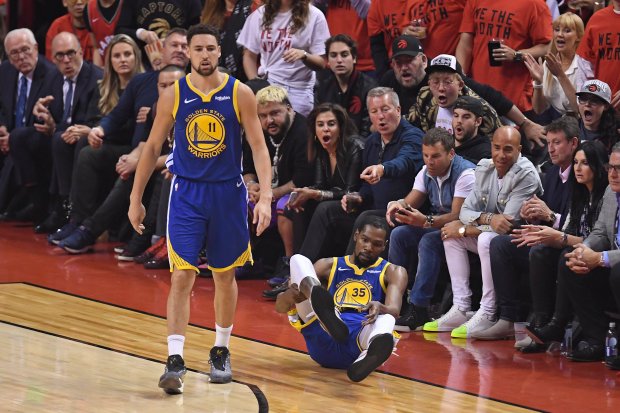 Hey everyone, hope you’re having a great start to the week. I can’t say the same for myself though, because something’s been on my mind since Monday night. So prepare for some harsh words in a rare Monique rant, because I would hope that I am not the only one disgusted by the actions of the 6ix’s very own during Game 5 of the NBA Finals (and I’m not talking about the players this time, I’m addressing some ill-advised Raptors fans).

For those who don’t know what transpired during Game 5 of the NBA Finals, it was the return of the phenom, Kevin Durant, to the Golden State Warriors, who was recovering from a calf injury that occurred over a month ago. With the Warriors having a lot at stake being down 3-1 in the series against the Raptors, Durant played both in the first and second quarter of the game, and then tragedy struck! Well, maybe not for many Raptors fans, but I’ll get to that soon. In mid-dribble, Durant’s right leg contracted and gave out, and he had to be escorted back to the locker room with a questionable return to the game. How some of the Raptors fans decided to behave during that incident of great loss and raw emotion was just inexcusable. Fans were booing Durant during a scary time, perhaps for the desire to win the game and clinch the NBA Finals, but come on Toronto fans, you know this is not how we do!

Anyone who’s been to Toronto and watched any sports game would know our fans do not participate in such classless behavior. To be quite honest, we are more inclined to applaud when an opponent gets up to his/her feet from injury! REAL Torontonian fans will not boo an athlete when they’re already down, no matter how high the stakes are, because it goes against our city’s culture! Now, people who don’t know much about Toronto sports fans will probably question the validity of this statement, so I’ll give you a prime example.

Last year during an important Toronto Blue Jays’ game, playoff implications were at stake, so all Jays fans’ eyes were glued to the game. In the middle of the game, a drunken fan decided to throw his beer near the other team’s center fielder, and trust me when I say, the rest of the Rogers Centre stadium did not take this well. I was at home watching and was dumbfounded. I use to work at the stadium and some of my former co-workers were not happy about the situation, and security escorted the fan out of the building. Blue Jays fans were booing one of our own for the stupid behavior, because there is an understanding between Torontonians that we do not stoop to that level of classlessness. So with that being said, what some fans decided to do in Game 5 of the NBA Finals looks really bad on Toronto fans.

Even with Kevin Durant gone from the game, the Toronto Raptors ended up losing the game in devastating fashion by just 1 point. Many might say the poor defense and questionable decisions near the end were why Toronto could not get the job done. However, as one of my friends commented, “It was karma. We deserved to lose.” To be brutally honest, I do think the Raptors deserved to lose that game. In conjunction with their poor performance, I have never been more disappointed in Toronto fandom than during Monday night. Those fans that decided to disrespect a superstar who was down should feel ashamed. We still lost the game, and at the end of the day you all just look like horrible sports fans to put it bluntly.

That’s all I wanted to say. Game 6 is on Thursday night in Oakland. My thoughts are with Durant. This piece is dedicated to all the REAL Torontonians.