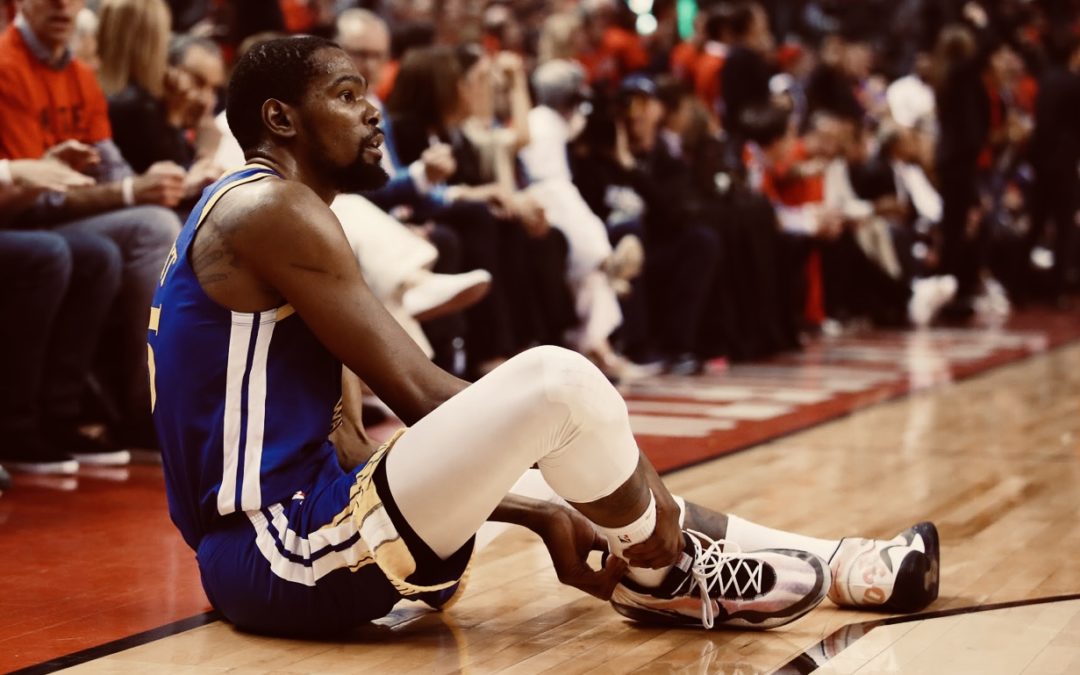 Game 5 of the NBA Finals ended with the Golden State Warriors winning a gutted out 106-105 victory in Toronto to avoid elimination. Kawhi Leonard had a two minute stretch that can match any stretch in NBA history where he went on a 10-0 run by himself. He hit tough shots and played great defense as well. It seemed as if the game was over, and Toronto would be celebrating their first championship–but the Splash Brothers, Stephen Curry and Klay Thompson, answered right back going on their own 9-0 run and grinded out the tough victory with Kyle Lowry missing on the game-winning attempt in the left corner.

The game was just as good as any NBA Finals game since 2016, but it came with a price. In the game, Kevin Durant made his triumphant return to the hardwood for the first time since he sustained a calf strain on May 8th, 2019 during Game five of the Western Conference Semi-Finals. The injury sidelined him for the rest of the conference finals, and the first four games of the NBA Finals. The Warriors announced when the injury occured that it was grade 1 calf strain — which is only about a seven to ten day recovery time. Fans, and reportedly players, were getting frustrated with how long it was taking Kevin Durant to get back on the court, but the trainers and himself felt he was not ready.

Losing two straight at home faced the Warriors with the daunting task of having to overcome a 3-1 deficit to win the title with two games being played on the road. Only one team has ever done what the Warriors are currently trying to do–the 2016 Cleveland Cavaliers. So, this put the Warriors is desperation mode, and Kevin Durant wanted to give it a go for the fans, his teammates, and his legacy. What happened tonight was the worst thing that could have happened–Kevin Durant sustained an Achilles Injury early in the second quarter. Shams Charania of the Athletic reported that it is definitely the Achilies, and that an MRI will take place today.

A video went viral of the injury close up, and it doesn’t look good. Kevin Durant plants his foot and you see something in the lower leg snap, sending a ripple up his entire calf. This almost certainly indicates an Achilles rupture, but nothing is official until the MRI returns. More than likely, Kevin Durant will be out for the remainder of the finals and a good chunk of the 2019-2020 NBA regular season.

Prior to tonight, a lot of sports fans began to question Durant’s reasoning as to why he wasn’t playing in the NBA Finals. The reason he didn’t is why all players who sit out due to injury do so, he wasn’t ready to go. Last season, Kawhi Leonard took a hit to his reputation because people began to question his motive for sitting out a whole season due to a quad injury. You often saw people questioning if he was trying to force his way out.

Because of Kevin Durant’s love for the game and wanting to play through the pain for his brothers, he’s now left with a summer where he enters free agency for a year he more than likely will not participate in while sustaining the worst injury a basketball player can get. Almost no one in NBA history has torn their Achilles tendon and matched the level of play they were at before the injury. The only exception to this is Dominique Wilkins, where he averaged 26 points per game after returning from the injury the previous year. That ended up being his last really good season, though. This is the injury that ended the careers of Pistons legend Isiah Thomas and Knicks legend Patrick Ewing. It’s the injury DeMarcus Cousins sustained last year and he hasn’t been himself since.

There’s been very few greater and more unique players in NBA history than Kevin Durant. The entire basketball world hopes and prays he’ll be back better than ever.