Tyler Reddick Gets Third Win of the Season 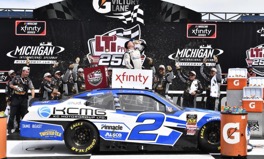 BROOKLYN, MI: The NASCAR Xfinity series went to the Irish hills this weekend in a full mileage race.  Who would make it to the line first, who would pit, and who would run out?

2018 champion Tyler Reddick in the 2 KCMG Chevrolet Camaro has won the LTI Printing 250 at Michigan International Speedway.  Reddick would lead 11 laps in the race and would take the lead with 10 to go. This is Reddicks third win of the season with Richard Childress Racing, and his sixth win of his career.

His former team, JR Motorsports, had all four cars in the top ten.  Noah Gragson in the 9 Switch Chevrolet Camaro did not lead a lap but was consistent throughout the day.  Gragson would finish second. Michael Annett in the 1 All State Parts and Service Group Chevy finished third while teammate Justin Allgaier in the 7 Brandt Professional Agriculture struggled throughout the race, but would comeback finishing fifth.  The last car was Jeb Burton in the 8 Tune In Info Chevy who is running a part time schedule. Burton finished ninth.

Stewart Haas Racing with Biagi-DenBeste looked like they could win for the second week in a row, but would fall short.  Cole Custer in the 00 Jacob Companies Ford Mustang led 20 laps, but would have to pit with ten laps to go because of low fuel.  Custer finished 12th. Chase Briscoe in the 98 Nutri Chomps Ford would spin with 49 laps to go to bring out the caution, but would make a nice comeback.  Briscoe finished seventh.

Joe Gibbs Racing had an up and down day.  Brandon Jones in the 19 1st Foundation Toyota Supra would not lead a lap, but would finish sixth.  Christopher Bell in the 20 RTP/Rheem Toyota led 36 laps and won stage two, but just as Custer, he would have to pit due to low fuel.  Bell finished 13th. The last car was rookie Riley Hebrst in the 18 Monster Energy Toyota who would collide with Jeb Burton. Hebrst would finish 37th.

Team Penske had both of their cars in the top 15.  Cup Veteran Paul Menard would run this race in the 12 Richmond Waters Heaters/Menards Ford Mustang led 56 laps, won stage one and finished 4th, while his teammate Austin Cindric in the 22 LTI Printing Ford finished 11th.

The next race for the Xfinity series will be the American Ethanol 250 at Iowa Speedway.  The race will start Sunday June 16th at 5:30pm.