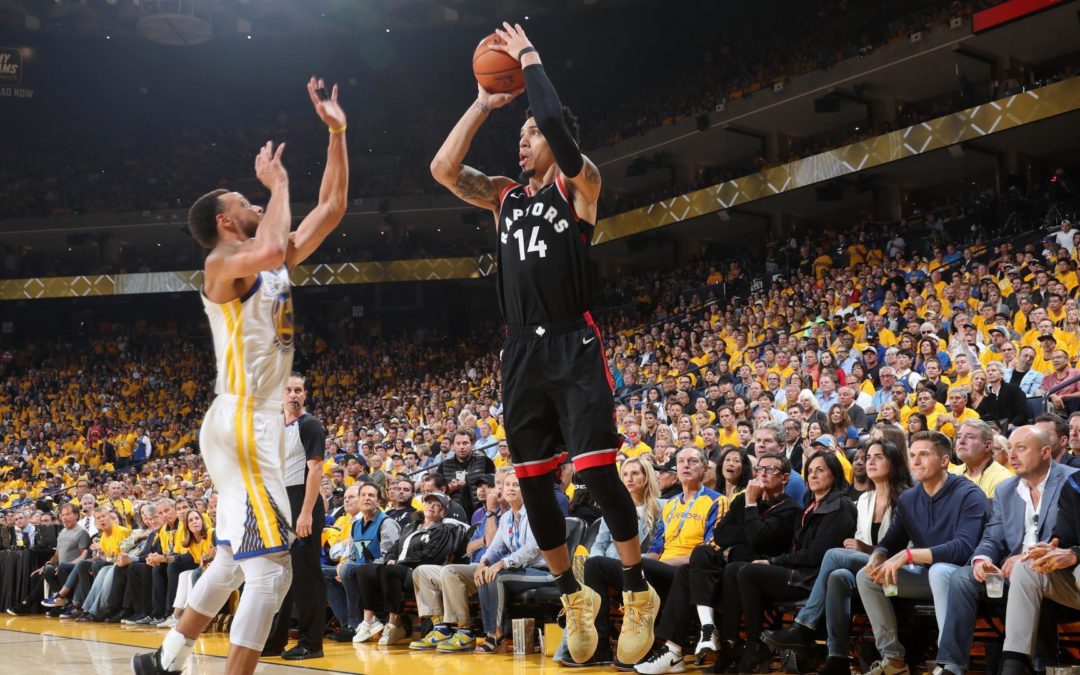 Hey sports fans, how goes the weekend? Last week was filled with TONS of epic sports moments, with many great records being made, so let’s get started with the team that successively invaded the west coast…
NBA: Meet Danny Green From Downtown
It is safe to say that Jurassic Park has taken over Oakland in the NBA Finals, as the Toronto Raptors put on a dominant Game 3 and Game 4 performance over the Golden State Warriors. Scoring a total of 123 points in Game 3, not only did the Raptors shoot an amazing 62.8% from field goal, Danny Green finally emerged from the shadows! It took a few games, but Green, one of the best 3 point shooters in the NBA, found his groove and ended up shooting 6 for 10 from 3 point range. Green dropped some big 3 pointers that propelled the Raptors to victory, and he ended up scoring the most points he’s scored in the playoffs thus far! From all of us Raptors fans, welcome back Danny Green!
MLB: Buehler reaches 11K!
It was another away game start to the series for the Los Angeles Dodgers, as they face the Arizona Diamondbacks on Monday, June 3rd, 2019. The Dodgers started their young pitcher, Walker Buehler, in Monday’s game. He wanted redemption from his lackluster start against the Diamondbacks back on March 31st. Little did he know, Buehler would not only get his first career win over the Diamondbacks, he would reach his season’s highest strikeout total with 11 and allowed no walks! Walker Buehler’s star-studded performance would lead to a 3-1 Dodgers victory over their divisional rivals, and a night the 24-year old pitcher will never forget!
MMA: The Kick of Death
UFC 238 took place on Saturday, June 8th in the Windy City of Chicago, and let me tell you, the fights did not disappoint…some of them were even downright deadly! The co-main event was a women’s flyweight championship bout between #1 contender: Jessica Eye and the current champion: Valentina Shevchenko. The champ was leading in the first round with a beautiful take-down to their opponent, but it wasn’t till the second round when Eye was bending down and getting ready for a combination, that Valentina caught her with an nasty head kick that would knock her out COLD! That KO was so concerning, all of the doctors had to come in the ring to check on Eye. MMA fans were also impressed with the champ’s KO victory, as the hashtag #RIPEye was trending on social media! Hats off to Valentina for another win at 125, and also to Jessica Eye for her amazing take down defence in the first round!
Speaking of RIP Eye, my most anticipated bout of the main card was between lightweights: #4 contender Donald “Cowboy” Cerrone, and the return of #2 contender Tony “El Cucuy” Ferguson. These two exciting fighters put on a spectacular action-packed performance in the first round, an all out brawl with no fighter seeming to waver, and Cerrone’s face the end of the round said it all- this was going to be a fun fight! It was looking that way in the second round, unfortunately once the round ended, Cerrone’s right eye was closing up too much from the swelling, and the doctors had to stop the fight. El Cucuy ended up winning the fight by TKO doctor’s stoppage, and although this was not the ideal situation both fighters wanted, I personally as a fight fan would love to see them run it back in a rematch!
The main event of this pay-per-view was a bantamweight bout between #1 contender: Marlon “Magic Moraes” and the flyweight champion: Henry “The Messenger” Cejudo. Moraes was looking really good in the first round, throwing various strikes and multiple leg kicks while Cejudo was being the more defensive fighter. The turning point of the fight was during the second round as Henry started to unload offensively, going forward with great combinations, upper cuts, and several knees to the head and body of Moraes. The Champ made history becoming both the flyweight and bantamweight champion, as he pummeled Moraes with his ground and pound in the third round to become champ-champ.
Tennis: Lucky # 12
I know this is my first time talking about tennis here, but I am a huge fan of both the ATP and WTA, and my favorite male tennis player just set a new record at Roland Garros ! #2 ranked male tennis player: Rafael Nadal met with #4 ranked Dominic Thiem in the French Open Finals, a classic match between the King vs the Prince of Clay. This tournament was no walk in the part for Nadal as he just beaten the incomparable, Roger Federer to get to this match, and Thiem had to beat #1 seed: Novak Djokovic to reach this finals!
The match started out close with Nadal taking the first set and Thiem taking his own with the second set, but at the end of the day, the Prince was no match for the King as the spaniard easily won the third and fourth set to win the tournament! If you saw the finish you could see how important this win was to the to the #2 ranked player. This is Nadal’s 12th Roland Garros title, making it his 18th grand slam title win! As a Rafael Nadal fan for 13 years now, I couldn’t be more happy for this victory, and it just goes to show that no one can play clay courts like the King!
That’s all for this addition of Monique’s Moments! I’m always open to any comments, so please feel free to reach out! You can also follow me on twitter (@MoniqueYip) I’m always active there! Have a good week sports fans! (P.S. Fingers crossed the Raptors can clinch the series in 5!)