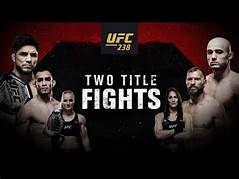 Chookagian last fought on 12/08/2018 at UFC 231, a split decision loss to Jessica Eye, who is fighting as the co-main event for the Women’s Flyweight Championship. Chookagian will be looking to get back in the win column against Joanne Calderwood. Calderwood’s last fight was 01/19/2019 against debutante Ariane Lipski. She played the spoiler to Lipski’s debut and began a two-fight win streak for herself. This fight will kick off the card for UFC 238! Chookagian is the #2 ranked fighter in the women’s Flyweight division; Calderwood is the #6 ranked fighter in the division. A big win for either could earn them the next shot at Shevchenko or Eye for the championship belt in this new weight division.

Eddie Wineland is coming off back to back losses against John Dodson on 04/22/2017 and Alejandro Perez on 07/14/2018. Both fights were unanimous decision losses for Wineland. He hopes to play spoiler for the debuting Russian Grigorii Popov. Popov’s last fight was against Baxier Teliunuer in the Wu Lin Feng promotion on 10/26/2018. Wineland will be Popov’s toughest competition to date, by far. Wineland, a 12 fight UFC veteran, seems to be at the end of his UFC career, but he is still younger than his debuting opponent. Wineland’s job may be on the line if he loses to Popov, and it might still be in jeopardy if he wins, but in less than impressive fashion. Popov has obviously impressed enough people to get to this point and a win over an experienced fighter like Wineland would put the rest of the men’s Bantamweight division on notice.

Bevon Lewis just experienced his first professional MMA loss in his UFC debut to an aging Uriah Hall on 12/29/2018. Lewis looked impressive out of the gate, but eventually fell to a counter right hand uppercut in the 3rd round. Lewis made a name for himself on Dana White’s Contender Series with two different TKO wins and he’ll try to get his first UFC win against Darren Stewart. Stewart is a six fight UFC veteran, although he has a losing record in the UFC at just 2-4. Stewart’s last fight was a split decision loss to the undefeated Edmen Shahbazyan on 11/30/2018. Lewis is a more athletic and better all around prospect than his opponent, but Stewart has shown serious fight stopping power. This Middleweight bout should be a slobber-knocker. *DOG PICK.

Xiaonan Yan was the first female fighter from China to sign with the UFC and is currently undefeated at 3-0. Her last fight was a unanimous decision win against Syuri Kondo on 11/24/2018. She is a striking specialist and will be facing another striker in Angela Hill. Hill is a ten fight veteran and has experienced ups and downs in the UFC against some of the best in the division. Hill’s last fight was a unanimous decision win over Jodie Esquibel on 04/27/2019. Hill was a replacement opponent for Esquibel after Jessica Penne pulled out due to injury, and now Hill is filling in for an injured Felice Herrig, Yan’s original opponent. The UFC is looking to showcase Yan as an up and coming Strawweight against a notable opponent. Hill will be Yan’s most seasoned opponent to date.

Ricardo Lamas is coming home to Chicago, IL for this fight. Lamas’ last fight was a 3rd round ground and pound TKO win against Darren Elkins on 11/17/2018. Lamas has sixteen fights in the UFC under his belt and is a former title challenger. Lamas is currently ranked #10 in the men’s Featherweight division facing Calvis Kattar, the #15 ranked fighter in the same division. Kattar is 3-1 in the UFC with his only loss to top contender Renato Moicano. Kattar’s last fight was a 1st round TKO win against Chris Fishgold. If either of these fighters expects to get a title shot in the near future, they will need to get a winning streak going. Either Lamas shows he’s still a contender in the division or Kattar will begin to make a name for himself as a fighter to look out for after a win over a long-time UFC veteran. This will be a tough test for both combatants and a gem for the fans.

Karolina Kowalkiewicz is now on a two-fight losing streak after a unanimous decision loss to Michelle Waterson on 03/30/2019. Kowalkiewicz seems to be in the twilight of her career as talks of retirement have started to circulate. Kowalkiewicz may look to go out on top against UFC new-comer Alexa Grasso. Grasso’s last fight against the undefeated Tatiana Suarez ended in the 1st round via rear naked choke on 05/19/2018. Grasso has shown she can hang in the Strawweight division with wins over Randa Markos and Heather Clark. A win over a former title challenger will get some buzz around her name. This looks to be a changing of the guard kind of fight. Karolina Kowalkiewicz is a formidable opponent and will be a true test for Grasso. If Grasso expects to get a title shot of her own, a win over Kowalkiewicz would certainly bolster her case.

Pedro Munhoz’s last fight was a spectacular 1st round TKO against former champion Cody Garbrandt on 03/02/2019. Munhoz is riding a three-fight winning streak as is his opponent, Aljamain Sterling. Sterling’s last fight was a unanimous decision win against top contender Jimmie Rivera on 02/17/2019. Sterling is currently ranked #3 in the men’s Bantamweight division and Munhoz is currently ranked #4. This matchup is a de facto #1 contender bout and should be another fan pleaser. The real surprise is that this fight is not even on the PPV. This bout will be broadcasted on ESPN for the world to get a good look at these two elite Bantamweight contenders.

Tatiana Suarez is an undefeated fighter in the Strawweight division. Suarez’s last fight was an impressive 3rd round ground and pound finish of former champion Carla Esparza on 09/08/18. One thing is for certain, Tatiana Suarez is the next big thing. Suarez is a juggernaut and her style is very similar to another undefeated fighter, Khabib Nurmagomedov. Suarez will put her undefeated record up against Nina Ansaroff. Ansaroff is on a four-fight winning streak of her own. Ansaroff’s last fight was a unanimous decision win over Claudia Gadelha on 12/08/2018.The six fight UFC veteran Ansaroff will use her well-rounded skill set to try and halt the Suarez hype train. Ansaroff is currently the women’s Strawweight division’s #3 ranked fighter and her opponent, Suarez, is the #2 ranked fighter. This will be another de facto #1 contender bout and it too will be on ESPN.

Tai Tuivasa’s last fight was a 2nd round TKO loss to former champion Junior dos Santos on 12/01/2018 and was his first professional MMA loss. Tuivasa will be looking for a knockout to get back to his winning way against Blagoy Ivanov, a fighter that has never been knocked out. Ivanov’s last fight was a unanimous decision win against Ben Rothwell on 03/09/2019. This bout will only be Ivanov’s third UFC fight standing at a 1-1 overall. This match is the only Heavyweight bout on this card and will be a true clash of styles.

Jimmie Rivera’s last fight was a unanimous decision loss to Aljamain Sterling on 02/17/2019. 13 months ago, Jimmie Rivera’s record 21-1 and was on a stellar 19-fight winning streak, but on 06/01/2018, Rivera lost via 1st round head kick TKO to Marlon Moraes. Moraes will be fighting for the belt on this card and Rivera is matched up against the 12-1 Russian, Petr Yan. Yan is undefeated in the UFC at 4-0 overall. Yan’s last fight was a unanimous decision win against John Dodson on 02/23/2019. Yan is the #9 ranked Bantamweight in the division and Rivera is the #7 ranked fighter. This matchup of two top-10 fighters will see a lot of boxing since both these fighters rely heavily on their hands to win fights. Yan throws more volume, but Rivera throws with more power. This should be a very exciting fight! *NO FLY ZONE

Tony Ferguson last fought Anthony Pettis on 10/06/2018 and ended with a 2nd round corner stoppage TKO win for Ferguson. The win put his winning streak to 11 fights, the second longest active winning streak in the UFC. Ferguson, the #2 ranked Lightweight fighter, will be fighting the #4 ranked Lightweight fighter, Donald Cerrone, for yet another de facto #1 contender fight. Cerrone is currently on a three-fight winning streak. Cerrone recently returned to the Lightweight division after a 6-4 run at Welterweight. Cerrone’s professional MMA record is 36-11, but his record at Lightweight is 30-7. Cerrone’s last fight was only a month ago on 05/04/2019, a unanimous decision win against Al Iaquinta. This fight has been dubbed “The People’s Main Event” due to the popularity of both fighters.

Valentina Schevchenko is the reigning, defending, undisputed UFC women’s Flyweight champion. Schevchenko’s last fight was against Joanna Jedrzejczyk for the then vacant championship belt on 12/08/2018. The fight ended in a unanimous decision win for Shevchenko. This bout will Schevchenko’s first title defense against the #1 ranked Jessica Eye. Eye is currently on a three fight win streak, but still has a losing record competing in UFC. Like the entire division, these fighters are both new to this recently constructed weight class, and are both in a more appropriate weight class for their bodies. Eye’s last fight was a split decision win against Katlyn Chookagian on 12/08/2018. This is the first championship fight of the night. *(SURE THING)

Henry Cejudo will attempt to become the third UFC two-weight class champion. Cejudo is the reigning men’s Flyweight champion, and he will be challenging for the vacant men’s Bantamweight championship belt. Cejudo’s last fight was against former Bantamweight champion T.J. Dillashaw for the Flyweight belt on 01/19/2019. The fight was a first round TKO win for Cejudo. Dillashaw was later suspended after that loss for USADA doping violations found in tests taken from that fight. Dillashaw relinquished the men’s Bantamweight title and this main event match up between Cejudo and Moraes will determine the new Bantamweight champion. Marlon Moraes is the #1 ranked men’s Bantamweight; his last fight avenged his only UFC loss to Raphael Assuncao. The fight was a 1st round submission win for Moraes, boosting his winning streak to 4 fights, and landing the #1 spot. This fight should be one for the ages as it is a clash of styles, the dynamic striking of Moraes against the exemplary wrestling of Cejudo. *(I LIKE THE RISK.)

(SURE THING) Valentina Schevchenko is the biggest favorite on the card, currently sitting at -1000 odds. Schevchenko is a technician and this should be one of many title defenses for her. (Bonus S.T. Tatiana Suarez will remain undefeated after her bout Nina Ansaroff).

(DOG PICK) The match between Bevon Lewis and Darren Stewart should be a slug fest. Both of these fighters are raw talents, and the first to make a critical mistake will likely be knocked out. Stewart is my underdog pick over Lewis. He is more experienced than Lewis and has shown the ability to shut his opponent’s lights out. Currently at +170, Stewart has a lot of value in what should probably be a pick ‘em fight.

(NO FLY ZONE) The match between Petr Yan (-330) and Jimmie Rivera (+255) expects to be an instant classic and much more competitive than the odds indicate. Each fighter is only one strike away from being done for the night. Unless you’re a really big Jimmie Rivera fan and you think he’s going to handle the newcomer, play those underdog odds! Otherwise, just keep your money and enjoy the show.

(I LIKE THE RISK) Marlon Moraes is a -130 favorite over Cejudo. He will be fighting in his normal weight class and he has shown that he can finish the top guys easily in that weight class with a loaded arsenal of strikes. Moraes is a sensible favorite, but he’s facing a reigning UFC champ. At minus odds, there is added risk on return in playing Moraes, but I think Moraes’ fight awareness will secure his victory.