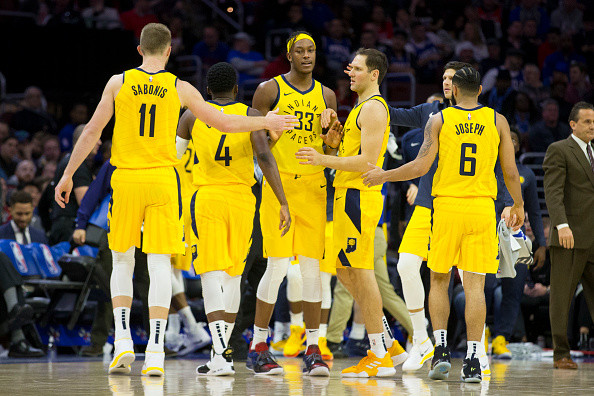 It is a pipe dream for the Pacers to land a top flight free agent. Kemba Walker, Kyrie Irving, Kevin Durant, Kawhi Leonard, or Jimmy Butler are not coming to Indiana. Just the simple fact that the Pacers are in a small market, haven’t had recent playoff success, and nobody knows when Victor Oladipo will be back.

If the Pacers swing and miss on other big name free agents like D’Angelo Russell, and Tobias Harris they still have plenty of cap room. They will have around 45 million if they don’t re-sign anyone so they can still go out and get solid contributors for the team next year. Look at guys like Bojan Bogdanovic, Darren Collison, and Lance Stephenson, they all came in and contributed in a positive way for the Pacers. 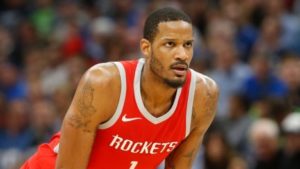 The journeymen Wing Trevor Ariza will be a free agent again this off-season, and the Pacers should take a look at him. A 6’8” 215-pound Small Forward, Ariza is the prototypical “3 and D” guy in the current NBA.

Ariza has played for seven NBA teams in his 15-year NBA career with most of his success coming when he was a part of the 2008 Lakers Championship team, and the most-recent Rockets teams that have had deep playoff runs.

Ariza was a key factor for that 2008 Lakers team, and the Houston Rockets when they were consistently making the playoffs. But recently Ariza has been taking whatever free agent offers he gets, whether that’s with a playoff team or not which could be good for the Pacers.

Last off-season Ariza signed with the Suns for one-year, 15 million dollar contract. With his age, it will be hard for Ariza to land that type of deal again, especially if a playoff team comes calling. The Pacers should offer Ariza a one-year deal around 10 million dollars if they want to land him.

This signing would give the Pacers a true “3 and D” guy that they have never really had on their roster. Ariza would be able to guard some of the better wing players, even for his age, and knock down the spot-up three point shot. With his size, the Pacers could also run him at the “stretch-four” spot and get more speed out there to play faster.

Ariza could also be a solid backup Small Forward if the Pacers re-signed Bogdanovic. He could come off the bench and be a good scoring option for the Pacers and give them around 15 points per game from the Wing spot. If the money is right, the Pacers should look at signing Ariza. 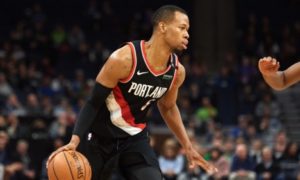 Another Guard the Pacers could nab in free agency. Rodney Hood is a very interesting talent that could be a key signing if made by the Pacers. A 6’8” 205-pound Shooting Guard, than can also play Small Forward, is on the free agent market this off-season. Hood is a bucket-getter and can fill it up from all spots on the floor.

Hood was drafted by the Utah Jazz. He became an every game starter for the Jazz in his second season. His scoring grew every year from eight points per game his rookie year to almost 17 points per game in 2017. Then he was involved in a three-team trade in 2017 which sent him to the Cleveland Cavaliers.

After making the NBA Finals with LeBron James in 2017, Hood would re-sign with the Cavaliers in hopes to become the regular starter. In 2018 Hood would struggle, only averaging 12 points per game on 40 percent shooting from the field. Then in February, 2019 he was traded again, this time to the Portland Trail Blazers.

Hood’s usage rate for his career has been around the same, 21.3 percent, and his true field goal shooting as stayed steady, 54 percent. One thing that does stand out, his one season he played over 70 games his total win shares were six, so if he plays majority of the season he is a pretty key contributor for whoever he plays for.

He might be a little more expensive than any other player the Pacers might land. With Hood being relatively young, at 26, he’s still in the prime of his career. The Pacers could offer Hood a 4-year deal around 44 million dollars. Not too overly expensive, but it’s a long-term deal that will need to pay off for it to be a good contract.

Hood right away can start for the Pacers, whether that’s at Small Forward, or at Shooting Guard while Oladipo is still out with injury. When Oladipo comes back, Hood can still start at Small forward or be a sixth man off the bench that could provide the instant offense the Pacers lack in their second unit. Hood is a player the Pacers should take a stab at if they want to improve their offense. 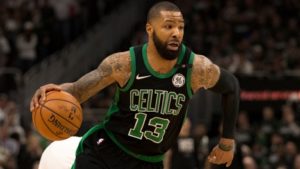 Marcus Morris, no not his twin Markieff Morris, but Marcus Morris. A very intriguing player the Pacers could bring on that would make a solid impact whether as a starter, or off the bench. Any Pacers fan saw firsthand in the playoffs what Morris is capable of doing on offense on any given night. The 6’9” 235-pound Power Forward has been in the league for eight seasons and is looking for a new team.

Morris signed a 4-year, 20 million dollar deal with the Phoenix Suns in 2015. He was then involved in some multiple-team trades that sent him to Detroit for two years, then to Boston for the final two. With the Celtics having a young core of Wing players, Morris might be the odd man out in Boston.

In 2018, Morris started 53 games for the Celtics averaging 14 points per game on 38 percent shooting from three. Morris was a key factor off the bench for the Celtics in their first round matchup with the Pacers, he averaged 12 points per game in the four-game series, one of which he didn’t score in. His plus/minus for the series was a +6, and in games one and four he had a +15 and +18. He also averaged 6.5 rebounds per game in that first round matchup.

Morris is the type of player that can be streaky, but when he’s hot, he can score from anywhere. Last season he had career highs in true shooting percentage at 56 percent, and three point attempt rate, which was 46 percent.

This is another middle level free agent the Pacers should look to get, Morris killed the Pacers in the playoffs last year. If the pacers could come in and after Morris a deal in the range of two-years, around 30 million dollars that would be a good signing if they don’t want to bring back Bogdanovic.

With the need for more shot creators Morris could fit in at the “Stretch Four” role in the starting lineup, or be a key sixth man off the bench. Getting Morris would give the Pacers a boost to their offense and with Morris focusing more on shooting threes, it will help the Pacers spread the floor better. Morris would also bring versatility with the lineup, being able to play the Small Forward role, and play the “Stretch Four” in any lineup. The Pacers should very much pursue Morris. 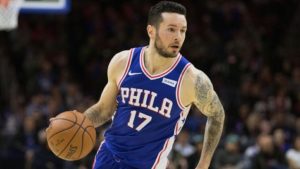 JJ Redick will be a free agent this off-season after re-signing with the Philadelphia 76ers last off-season. The 6’4” 200-pound Shooting Guard out of Duke has played for multiple teams in his 14-year NBA career.

Drafted by the Orlando Magic in 2006, he spent his first seven seasons in Orlando before moving on to play for a couple different teams. After playing four years for the Los Angeles Clippers Redick would become a free agent, and he was looking to join a contender. He joined the Philadelphia 76ers on a one-year deal.

After that season Redick hit free agency again in 2018, he was strongly considering the Pacers, but decided to re-sign with the 76ers. The interest from the Pacers was high, but when the 76ers upped their initial offer Redick decided to stay in Philadelphia for one more season.

In 2018 Redick started 63 games for the 76ers. His shooting took a dip from the previous year, in due part to him shooting more threes per game, going from six to eight per game. Redick still shot 40 percent from three for the 76ers last season, and averaged 18.1 points per game.

The difference between last off-season and this off-season are contrasting for the 76ers. Last off-season it was about landing key pieces to add to their already young, talented roster. This July will be a lot more different, after trading for Jimmy Butler and Tobias Harris the 76ers have priorities to make, and that is who to bring back and who to let go. Redick might be the guy let go.

If Redick had interest in the Pacers last off-season and still wants to come here the Pacers should go after him again this off-season. The Pacers should offer up a short two-year deal worth around 12 million dollars for Redick. That deal wouldn’t strangle hold the pacers long term, and it will still allow them to pursue other good free agents.

Redick would bring the consistent scoring that the Pacers need whether that is coming off the bench behind Oladipo, or starting alongside him when he returns from injury. Head Coach Nate Mcmillian mentioned wanting to shoot more threes and playing at a faster pace next season, adding Redick would give the Pacers a legit three-point sharp shooter that the Pacers have really lacked for some time. If the interest is still there, the Pacers should very much pursue JJ Redick in free agency. 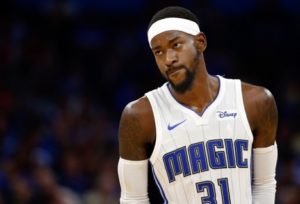 Any Pacers fan will know exactly who this guy is. Terrence Ross was a Pacer killer last year for the Orlando Magic. Ross is a 6’7” 206-pound Shooting Guard that can also play the Small Forward, he has played for just two teams in his NBA career, the Toronto Raptors and the Orlando Magic.

2016 Ross signed a three-year 31.5 million dollar contract with the Toronto Raptors. He was entering his fifth season in Toronto, averaging around 10 points per game for the team. Then mid-way through the season the Raptors traded Ross to the Magic. Now, in 2019 Ross is a free agent looking to get paid.

Last season for the Magic, Ross averaged a career-best 15 points per game coming off the bench for the Magic. Ross shot 42 percent from the field, 38 percent from three, and had an effective field goal percentage of 53 percent. He also had a career high in rebounds, and assists per game, but if a team signs him, it’s to score.

In the advanced statistics Ross made big leaps. Career highs in Player Efficiency Rating (PER), true shooting percentage (TS %), three point attempt rate percentage (3PAr %), and usage rate (USG %). His PER was 15.4, TS % was 56, 3PAr was 55, and USG % was 23.9. With Ross shooting more threes and the Magic using him more in the offense it grew how effective Ross was when on the court.

Pacers fans remember Ross from their four battles with him last season, a season where he averaged 20 points per game against the Pacers. That average was the most for Ross against any Eastern Conference team.

In late January, Ross had his best game to date for the Magic. Against the Pacers he had 30 points on 11 of 18 shooting from the field and five of eight from three, with four rebounds and three steals.

Ross is the ultimate “microwave” player. It only takes him two to three shots to get going. He has developed his three point game now to where every team is scared when he takes a shot, not because he will make it, but because they know if he hits one, he’s going to start hitting all night.

The contract wouldn’t have to be too expensive, but might be lengthy.